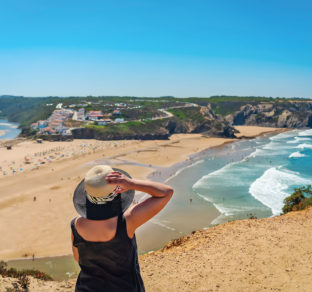 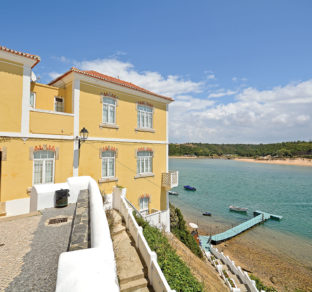 The Mira River meets the Atlantic Ocean in the colorful village of Vila Nova de Milfontes, which lies within a national park. © Ahfotobox | Dreamstime.com
By Jeanine Barone Posted on March 29, 2021

Strolling a sandy lane atop tall sea cliffs in Portugal’s Cape Sãrdao with nary a hotel in sight, I found an idyllic, pastoral setting far away from the hustle and bustle of Lisbon, just two hours north. My only company was a white stork gliding overhead.

Springtime is especially lovely in southern Portugal, with lavender and thyme blooming, and stork chicks squirming in nests built precariously on the cliff’s rocky ledges.

Rockrose, heather and hottentot fig line the paths through the Natural Park of Southwest Alentejo and Costa Vicentina — a protected land and sea area of more than 183,000 acres on the Atlantic coast.

Meaning “Beyond the Tagus [River],” the Alentejo, Portugal’s largest province, is a precious landscape, ranging from pristine coastal sand dunes to a sun-baked interior region stretching to the Spanish border.

Amid the Alentejo’s olive groves, cork trees and vineyards are fortified hilltop villages where the Romans and, later, the Moors once ruled.

Cape Sãrdao’s windswept expanse is famous for its curious, century-old lighthouse, Farol Cabo Sãrdao. The red-capped tower was built facing inland instead of toward the sea. Here you can park, get a closer look at the lighthouse, and explore the cape’s picturesque trails.

Unwilling to leave the beautiful coast, I cruised five miles to Praia de Almograve. Come during low tide and you’ll delight in the wide crescent of golden sand at this beach, where black volcanic rocks pepper the sand and cliffs tower above. At high tide, surfers are attracted to the roiling ocean.

A short drive away is Vila Nova de Milfontes, a picturesque village situated where the placid Mira River meets the turbulent Atlantic.

Vila Nova is blessed with undeveloped beaches flanking both sides of the river that attract plenty of birds. You may spot a kingfisher plunging into the water to capture a meal, or glimpse a grey heron spreading its wings on the shore.

In this village, Tasca do Celso is a homey establishment where the locals sit on cork stools at the bar. Black pork tenderloin is one of the many Alentejo specialties served at this eatery.

The next day, as I drove some 70 miles east, my route took me past what would become a familiar sight: clusters of gnarled cork oak trees. (Portugal is the world’s largest cork producer.)

Above blond plains floats Beja, a whitewashed village surrounded by battlements. From its hilltop perch, Beja stands as a former key Roman outpost. In fact, the soaring Tower of Menagem, the most outstanding structure of Beja’s centuries-old castle, was built atop Roman ruins and is considered the symbol of the city.

Twenty miles southeast is Serpa, a tranquil, whitewashed, ancient town renowned for both cheese-making shops and museums. The delectable sheep’s milk cheese bearing the same name as the town varies in texture and flavor depending on how long it’s been aged. The youngest is soft and creamy, while aging for two years produces a harder, pungent, but no less tasty, product.

Among the museums, the most extensive is the Ethnographic Museum, which displays historic tools, instruments and machines, grouped by occupation, from blacksmith to basket-maker.

Monks and the macabre

After navigating 60 more miles on roads flanked by farmland, I gazed in the distance, gaping at a white city, Évora, the region’s historical center and a UNESCO World Heritage site.

I meandered Évora’s tangle of cobbled streets, checking out the many architectural and historical treasures.

One of the city’s most talked about venues is the Capela dos Ossos, part of the Gothic 16th-century Church of St. Francis. The macabre chapel’s walls and columns are constructed from floor to ceiling with human skeletons — more than 3,000 skulls can be counted. It’s no wonder Franciscan monks once meditated here on the meaning of life and death.

Surprises are everywhere in Évora: The present-day city hall was built around the visible Roman baths, and at the Cathedral of Santa Maria stands a marble statue of a pregnant Mary.

Just outside town is Convento do Espinheiro Historic Hotel and Spa, a converted 15th century convent where the monks once hosted Portuguese kings.

Olive, one of several restaurants on the property, makes for an atmospheric dining spot. (It’s set in the kitchen once used by the monks.) Here you can dig into a scrumptious thin-crust pizza, such as one topped with mozzarella, cured ham and local figs.

Those who decide to stay at this luxe property may not want to leave, not just because of the evocative setting and guest rooms with balconies overlooking the blooming gardens, but also the relaxing spa. Olive oil-based signature massages and other treatments relying on organically-grown botanicals are among the most popular options.

I started the next day by driving an hour through a landscape carpeted with silvery olive trees, fields of lavender and vineyards toward Monsaraz — a wall-encircled medieval village on a lofty perch high over the Guadiana Valley.

As I wandered the hamlet along schist-paved streets, I noticed that this dark stone is just about everywhere, from the facades to the floors of houses festooned with bougainvillea.

Dating to the 13th and 14th centuries, the dwellings are bedecked with immense wooden doors bearing iron door locks and knockers. Those who climb to the top of the castle have grand views of the pastoral countryside.

There’s no need to leave the views behind if you have lunch at Sabores de Monsaraz, a cozy restaurant serving tasty, rustic cuisine. The scenic tables on the outdoor patio offer views over the vast Alqueva Dam. Two dishes worth trying are codfish migas (a traditional dish with bread that’s first soaked in water and then fried with garlic, olive oil and coriander) and the roasted lamb.

No trip to the Alentejo is complete without a visit to Marvão, almost two hours away. You’ll navigate twisty roads to get to this village, whose walls seem to be one with its rocky perch. On the western edge of Marvão, a 13th-century fortress huddles on the crown of a rocky outcrop.

Checking out the strategically placed stone sentry posts and cannons along the bulwarks, I was treated to awe-inspiring views of the Portuguese mountains Serra de Estrella and Serra da São Mamede, a natural park dotted with Neolithic remains.

Remembering a Jewish past

Roaming about narrow streets, I spotted ornate granite doorways in the former Jewish neighborhood, where ancient stone portals are etched with evidence of their past: diagonal grooves for mezuzahs. Here is one of the oldest synagogues in Portugal, a 13th-century structure that’s now a Jewish museum.

As I prowled the village’s network of streets, I was lost in thought, recalling the many discoveries on my Alentejo journey. It’s hard to believe that driving just two hours from Lisbon’s gleaming skyscrapers can transport us back centuries.

As of press time, Portugal is open to travelers who present a medical certificate with a negative COVID-19 PCR test result issued within 72 hours of departure. Round-trip flights to Lisbon in April start at $345.

In Évora, deluxe rooms at the Convento do Espinheiro Historic Hotel and Spa can be found for as low as $181/night. Pizzas and most of the main courses served at its restaurant, Olive, start at $18. Massages and other treatments at the spa start at $120 to $160; see conventodoespinheiro.com.

For those looking to stay overnight in Vila Nova, Casa da Eira Boutique Houses is convenient to both the historic town center as well as the beach and the Mira River. The rooms are minimalist and comfortable, some offering memorable views from a private balcony. At Casa da Eira, rooms start at $85 and apartments at $170/night; see villaeira.pt.

At Tasca do Celso in Vila Nova, dishes are typically priced under $30 per person; see wonderful.land/tascadocelso.

Entrees often range from $15 to $18 per person at Sabores de Monsaraz; see saboresdemonsaraz.com/eng.

To learn more about the Alentejo, go to visitalentejo.pt/en.