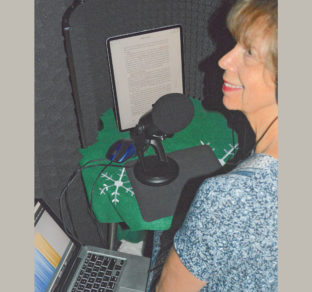 Nicole Lacroix recorded the audiobook for Slaters Lane by local author John Adam Wasowicz from her cramped home studio. She used an iPad to make color-coded notes on the text for each character. Courtesy of Nicole Lacroix
PRINT

All in a day’s work for D.C. native Lacroix, 67, who for the past 20+ years has helped air the classics over WETA, 90.9 FM. She has also just completed narrating Slaters Lane, a mystery by local author John Wasowicz — her first audiobook.

“I’ve wanted to record a book for a long time,” Lacroix said in a recent interview. “I even took acting classes to learn how to get into character.

“I’m not sure how well I succeeded, because the only review I received complimented me on my wardrobe.”

The mother of three and grandmother of eight spent an hour each evening for about a month by stepping into her small home studio, which she soundproofed to keep out the surrounding noise: husband, dog, whirling fans and “the mega HVAC” system for the apartment building across the street.

She described the recording studio in her D.C. waterfront townhouse as looking like “a miniature phone booth, or an upright casket like King Tut’s.”

Before recording, she gave the book a close read, then marked up her iPad with different colors for each character. “I try to keep in my mind the sound and look of each character,” she said.

Lacroix said that rather than fully emoting, as some audiobook readers do, she narrated the novel word for word, leaving in all the “he saids” and “she saids.”

She gave a “nuanced” tone of voice for each character, however, pitching it higher for women, lower for men. When a voice she had heard in a coffee shop or news broadcast sounded like she thought one of the book’s characters could sound, she gave it a go at adapting the real-life voice for character.

Even in narration, rather than dramatization, “it is an important challenge to differentiate voices,” Lacroix said. She learned to draw a distinction, for instance, between “the hopeful voice of a young woman versus the confident voice of a woman executive.”

The sale of audiobooks has grown so much that a recent article in the Guardian asked, “Are audiobooks the new…books?”

The August article noted that audiobooks “have been riding a wave of popularity in the past three years, and it appears that the lockdown only intensified our engagement with the spoken word…Global sales have been growing at 25-30% per annum for the past three years and will hit $3.5 billion in 2020.”

Both Lacroix and author Wasowicz, 68, graduated from Walter Johnson High School in Bethesda, albeit at different times. They have never met.

But Wasowicz, who is also an Alexandria attorney, was looking for a woman to narrate his third Mo Katz novel and happened to be tuned into Classical WETA one day. There he heard the voice he wanted for the audiobook version.

He reached out to Lacroix, and the project took off. (By coincidence, Lacroix once lived near Slaters Lane in Old Town Alexandria, the title and setting of the book.)

Slaters Lane is set in very contemporary times. It is the year of the coronavirus. The constraints posed by COVID-19 force Mo Katz, the (fictitious) U.S. attorney for Virginia, and his staff to carry out a virtual investigation.

The team relies on technology to conduct a street search, online witness interviews, and teleconferences to solve the crime and untangle a tale of jealousy and deceit.

In Wasowicz’s previous novels, Daingerfield Island and Jones Point, Katz solves the mystery, but this time he does it while navigating an identity crisis.

Katz is half Black (mother) and half Jewish (father). As Wasowicz explained, “His parents never immersed him into either of their rich cultures. As a result, both cultures excluded him.”

Katz’s “identity crisis jumps to the front of the narrative. The coronavirus is the catalyst,” Wasowicz said. “[Katz] feels his life is spinning out of control and tries to anchor himself by reaching out to his parents.

“He learns that his Black mother is in the hospital, fighting COVID-19. The coronavirus reminds him how important family connections and cohesion are,” he added.

Lacroix said she has been listening to audiobooks for years, especially on her commute. Her favorite narrator is Jim Dale, who brings the Harry Potter books — and its many characters — to life. “How he imagined so many voices, I don’t know. Pure genius,” she said.

The seasoned radio host said that the voice she struggled most with wasn’t a person at all but a device.

“The hardest one to get in this book was an ‘Alexa,’ much as I detest the sound of her voice!” Lacroix said.