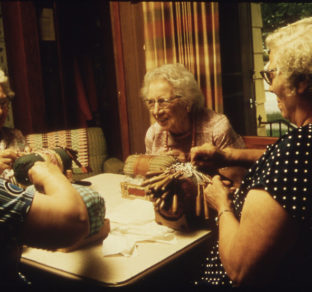 On a chilly fall morning, Esther Courtney sat at her kitchen table, staring out the window overlooking the farmlands of Lancaster County, Pennsylvania.

It was day four of her retirement, and she still wasn’t quite used to sleeping in past 5 a.m. and not dedicating eight hours of her day to doing other people’s laundry.

So instead, she was talking with a reporter about the high cost of senior housing and what it’s like to have three roommates at age 71.

Then one of the women she lives with, Ruth Dunlap, 74, stepped into the room. “Do you want something to drink?” Dunlap asked. “We have coffee or tea?”

“No,” Courtney said. “Not the way you make coffee.”

Once her roommate turned away, Courtney leaned in and added, “This is going to be a very long morning.”

As Dunlap sat down, a third roommate, Rose Marie Sheaffer, 78, made her way into the room, clutching a cane.

“You better behave,” Courtney said. “You don’t want to cross the lady with the cane.”

They could keep this back-and-forth, quick-witted banter going for hours — a connection that one would think took years to build. But a little over a year ago, these women were strangers.

Today, they call themselves the “Golden Pioneers,” part of a big co-living experiment to tackle issues of loneliness and access to affordable housing among older adults.

The three women live in the Thistledown Co-living House, a 4,000-square-foot home in New Holland, Pennsylvania operated by Garden Spot Village, a nonprofit retirement community just down the road.

Steve Lindsey, the CEO of Garden Spot Village, spent his whole adult life trying to foster environments for people to grow and learn from each other in any stage of their lives.

“As a society, we’ve really begun to lose touch with that — of what it means to be connected with your neighbors,” Lindsey said, “to know the people who live around you, to be involved in people’s lives and to share healthy relationships and supportive relationships.”

Of course, not everyone can afford those fees, and Lindsey fears people are being forced to live in isolation as a result — a thought that is very unsettling to him.

“As a society, we reserve living in isolation for our worst criminals. We put them in solitary confinement,” Lindsey said. “Yet there are so many older adults that, just through the course of normal life, become sequestered away in isolation.”

Lindsey wanted to create opportunities for people who couldn’t afford to live at Garden Spot Village. He considered alternative options, leading him to recall the popular television show, “The Golden Girls” — the late-80s sitcom about four “mature” women living together in a home in Miami.

From sitcom to reality

So, then he thought, what would it look like if Garden Spot Village owned a large house where people, for a reasonable price, could rent a bedroom, but share the kitchen and living room with others?

“So we started to ask ourselves, ‘could five unrelated people actually enjoy life together? Could you really build a model that allows people to live [affordably], without having government subsidy?

“And the answer to both those questions is absolutely yes,” Lindsey said.

The residents pay 30% of their income for rent: it’s a sliding-scale fee, which is the same used at government-sponsored or government-subsidized housing models. Utilities are included: Wi-Fi, cable, building and grounds maintenance — everything except food.

Lindsey said there is priority placed on lower-income applicants and applicants who already live in the area and want to stay close to their communities.

The Thistledown Co-living House won the award for best design from Senior Housing News in 2019, and architecture students from Kansas State University were recently given a grant to do a thorough review of the house.

Being part of any household — whether with a partner or spouse, family members or roommates — can ward off loneliness.

And a social worker from Garden Spot Village serves as a moderator to assist if residents ever run in to points of tension as they learn to live together.

“I’m 74 and I still have three roommates,” said Dunlap, who is divorced. “It’s out of economic necessity, but I also didn’t want to be alone anymore.”

Dunlap was a corporate trainer at Auntie Anne’s Soft Pretzels for 15 years and now is a receptionist at a restaurant. She’s witty, and you can immediately tell that she’s a natural leader.

She’s the one who reins the women in when it’s time for them to sit down for their game night — a new tradition they’ve started on Friday nights, complete with Scrabble and Bingo.

There are moments when the women are not feeling super-social, and just go to their room and shut the door. “But there’s something comforting about knowing that there’s someone possibly in the living room,” Dunlap said.

Sheaffer, 78, is “the lady with the cane.” She’s a lot of fun, has a great laugh, and likes to cook. She never lived in a house like this before, but said since moving to Thistledown, she would be afraid to live alone now — something about it just feels safe.

Courtney’s husband passed away in 2012, and she had been living alone since then.

“It got lonely,” Courtney said. “And I just didn’t want to do it anymore, so this seemed like a good idea. And it’s worked out.”