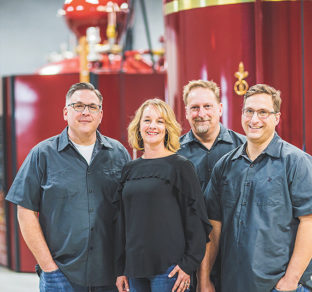 The Haneberg family (from left to right: Barton, Vicki, Brad and Barry Haneberg) opened Virago Spirits in the Diamond in 2014. They distill gin and rum “on a vintage, direct-fire, 2,500-liter Charentais-style alembic still — one of only a few operating in the United States.” During the pandemic, Virago Spirits offers curbside pickup, delivery and limited reservations in its tasting room. Photo by Nick Davis
PRINT

Two years ago, the three Haneberg brothers from Richmond decided they wanted to work together and also leave a legacy. Now they handcraft unique rums, gins and other spirits in a former warehouse, the Virago Spirits distillery.

“We wanted to put our own spin on rum,” Vicki said, so they age it in barrels (most rums are not aged, she explained). Their most popular product is a blend of six imported Caribbean rums.

The Hanebergs craft other rums from molasses, aging them three or more years in a direct-fire, 2,500-liter French still. They also produce flavored gin and a coffee liqueur.

Brad spent 27 years as a securities lawyer, noting that most of a lawyer’s work is forgotten over time.

His wife, Vicki, said, “My advice for someone who wants to find a new direction after 50 is to find something that feeds your soul.

“Make sure you are with people who make you a better person and do something that you believe in, that makes you proud and excited to come to work each day. It should not feel like work; it should feel like fun,” she said.

After many years working or raising children, a number of retirees like the Hanebergs are reinventing themselves as distillers and brewers.

The time is ripe. Artisanal craft brew and distilling businesses have popped up all over America as more people are seeking out custom-made, small-batch beer, spirits and hard cider.

The number of licensed distilleries in Virginia has soared from 10 in 2005 to 70 today. Cideries have had a similar trajectory in the state, exploding from two in 2010 to 50 in 2020.

During the early months of the coronavirus pandemic, when retail shelves began to empty of hand sanitizer, many distilleries stepped up to put their high-power ethanol — the intoxicating ingredient of beer, wine and hard liquor — to good use making hand sanitizer by the gallon.

They were well-positioned to make this pivot because they already had a license to use alcohol and plenty of stock on hand. (Besides, even though liquor stores remained open, few customers ventured out to take tours or visit tasting rooms with stay-at-home orders in place.)

Antiseptic sanitizers are also for sale at the Catoctin Creek Distillery in Purcellville, Virginia, housed in a former car dealership built in 1921 to sell Model-Ts.

Their flagship product is their premium rye whiskey, which is pot stilled just like in the 1800s, and has won gold medals across the globe.

Twenty years of government contracting headaches “taught me a great love of whiskey,” Harris joked. Feeling “burned out” when he retired, he and wife, a chemical engineer, opened their distillery in 2009.

Now, in their “second act,” the couple’s experience is similar to that of other Virginia families who have teamed up to create craft beverages.

Moonshine runs in the family

Two generations are behind the Belmont Farm Distillery in Culpeper, which now sells an array of sanitizers and offers curbside pickup.

During his 30 years as a commercial pilot, Chuck Miller spent his days off at his family’s 200-acre farm, where he grew corn and made small batches of moonshine — an unaged, corn-based whiskey with a high alcohol content.

Miller learned the ropes as a teenager from his grandfather, who made beverages of questionable legality and concealed the containers in brown paper bags.

Miller recalled that, when he was a child, his grandfather’s many milk jugs, and the steady stream of customers for their contents, puzzled him “because granddaddy only had one cow.”

When airline rules forced his retirement at age 60, Chuck said, making whiskey seemed like the “natural thing to do.” So, he and his wife, Jeanette, established Belmont Farm Distillery, where they grow their own corn and produce whiskey in a 3,000-gallon copper pot still. The still is the “secret of our whiskey,” he contends.

The Millers also make vodka, bourbon and gin, some flavored with cherries, butterscotch and peaches. But by far the most popular product is the moonshine: their 100-proof unflavored Virginia Lightning.

“We are preserving an American and family tradition. We keep the old pot still going,” Miller said.

Nothing but the apple

The Shelton family operates their own farm in North Garden, Virginia, 10 miles south of Charlottesville. The family patriarch planted the Rural Ridge Orchard, while two of his grown children started studying heirloom apples.

By 2009, the family hobby evolved into Albemarle CiderWorks, with Chuck Shelton, a former radiation control specialist for a nuclear power plant, as the cidermaker.

The Sheltons are now resurrecting the cider culture of old, making a pure, artisanal product.

“There’s nothing in the glass but the apple,” said Charlotte Shelton, Chuck’s sister and a former financial advisor who now oversees Albemarle CiderWorks’ workshops and events.

There are more than apples at the Mt. Defiance Cidery and Distillery in Middleburg. Lead distiller Peter Ahlf spent 25 years as an aeronautical engineer at NASA and a private firm, helping design the Space Shuttle and the International Space Station.

But it wasn’t until Ahlf retired that he started making a kind of rocket fuel. Today, he crafts an award-winning absinthe, a green, anise-flavored spirit.

Ahlf makes 400 bottles a month of the 140-proof brew from scratch. He grows the potent beverage’s key herbal ingredients — wormwood and hyssop — at Mt. Defiance, co-founded in 2014 by Ahlf and Marc Chretien of Arlington, Virginia.

For most of his life, Chretien practiced law, served in the New Hampshire legislature, was counsel to a Congressional committee, and advised four-star combatant commanders in Iraq and Afghanistan.

Chretien didn’t want to settle for “the classic retirement — go to Florida and play golf,” he said. “When you come out of a pressure-cooker environment, you need something to do. I’m not really geared to sit home.”

Chretien said he’s happy, but he warns retirees who want to open a distillery that it’s not a get-rich-quick scheme.

“Don’t plan on making a fortune,” he said. “You have to be prepared to work for free and have workers earn more than you in some years, if you have chosen something you like doing.”

For more information about Virginia’s distilleries and cideries, visit the websites of the companies mentioned above, or see virginiaspirits.org/spirits-trail, virginiacider.org/explore-cideries or AmericanWhiskeyTrail.com.