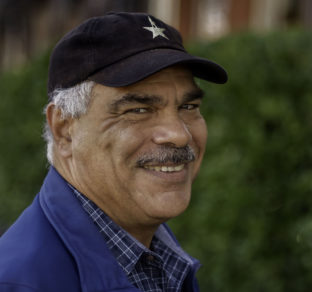 Rob Jones, executive director of Groundwork RVA, teaches students to plant and care for trees throughout the city. His organization is one of a dozen groups involved in the current Greening Southside Richmond project. Photo by Samia Minnicks
PRINT 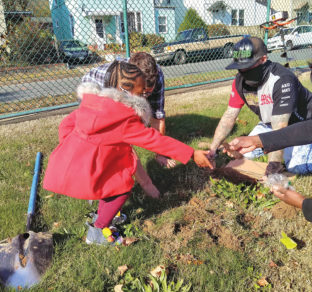 Students learn how to plant and care for trees with help from the nonprofit Groundwork RVA. Many local groups, from small churches to Dominion Energy, are dedicated to beautifying Richmond with plants. Photo by Dylan Jones, Groundwork RVA
By Glenda C. Booth Posted on April 12, 2021

Richmond is getting greener, thanks to Richmonders who are getting involved in a number of tree-planting projects around town.

One of them, led by the Chesapeake Bay Foundation, involves a coalition of 12 organizations in the Greening Southside Richmond Project, who are working to convert asphalt into green spaces.

Participants are planting 250 trees on municipal properties and giving away 400 trees in communities like Oak Grove, Bellemeade and Manchester.

Studies have found that in many cities, including Richmond, some neighborhoods with minimal tree canopy are five to 15 degrees hotter than tree-covered areas. That’s because these neighborhoods tend to have more paved surfaces, which absorb and radiate heat.

“Southside Richmond has been under-resourced for decades,” said Ann Jurczyk, director of outreach and advocacy for the Chesapeake Bay Foundation and coalition leader.

“The lack of investment in green spaces — and trees in particular — correlates to poorer air quality and ‘heat islands,’ which can lead to increased emergency room visits,” she said.

“We can’t make right decades of disinvestment, but we can improve water and air quality and hopefully the health of Richmond’s Southside residents today.”

Other partners in Greening Southside Richmond include the city, Southside ReLeaf, True Timber Arborists, Inc., Virginia Department of Forestry and VCU’s College of Humanities and Sciences Department of Biology.

One study found that 844 houses in Athens, Georgia, with an average of five trees in the front yard, sold for 3.5% to 4.5% more than comparable houses without trees, according to Tree City USA.

Trees even foster mental and physical health. A University of Illinois study found that hospital patients recovered from surgery more quickly when they could see trees outside their window.

The act of planting trees can be beneficial, too. In the process of greening the city’s brownfields, parks, streams and schoolyards, a group called Groundwork RVA helps youth transition to adulthood.

Rob Jones, executive director of Groundwork RVA and a Greening Southside partner, is galvanizing the next generation of urban conservationists, guiding youngsters toward a greener, more sustainable and more equitable city by transforming neglected spaces into public assets.

His group provides a hands-on “learning lab” for 45 to 60 youngsters a year who take pride in improving their communities and completing a project.

Working with Jones, the students plant trees and water them to ensure their survival. In past years, they have built planter boxes and distributed them to older adults.

This year, from May to September, they will also install green infrastructure, such as permeable pavers and rain gardens.

“I do this because I have a deep and abiding commitment to empowerment of young black and brown people, as well as a vision of equity in a city that has come to be my home and needs leadership to make it greener,” Jones said.

“I have faith that these young people will provide that leadership in years to come.”

One of his students, who is headed to Stanford University in the fall, has emerged as such a leader. She almost single-handedly created a community garden for the affordable apartment community Hillside Court. Her initiative landed Groundwork RVA a Virginia Outdoors Foundation grant to educate teens about managing an urban micro-farm.

This summer, as part of the Greening Southside Richmond project, congregants at Branch’s Baptist Church will convert half an acre of concrete and asphalt to a leafy habitat in hopes that the 10-acre church grounds can become a conservation model.

Second Baptist Church in Southside is one of 22 multi-denominational faith-based organizations that make up Richmonders Involved to Strengthen Our Communities (RISC), a group that is planting trees to reduce heat in the city. Half of RISC participants are over age 50.

“God gave us the environment not to abuse, but to manage because it benefits humankind. We don’t own it; we manage it,” Hodge said.

Since 2014, Hodge’s church members have tended a vegetable garden where people learn how to grow grapes, okra, strawberries, spinach, broccoli, peppers and corn.

Many over-50 Richmonders have found a cause with the Richmond Tree Stewards. Since 2008, Louise Seals has worked with the city’s Urban Forestry Division to lead the all-volunteer program.

In an effort to educate the public about the value of trees and tree care, the program trains volunteers in techniques such as pruning. Anyone who has completed the training course can get involved and do the required 15 hours of volunteer work a year.

In a normal year, Richmond Tree Stewards tend to about 5,000 trees. They sponsor tree giveaways in coordination with Enrichmond Foundation’s Tree Lab. They also help with the city’s Adopt-a-Tree program.

She is also a 2014 founding member of the James River Park Invasive Task Force. Team members are tackling 26 invasive plant species in Belle Isle Park — including tree-of-heaven, Amur honeysuckle and Johnson grass — that can threaten the health and longevity of trees.

“When there’s a big job to do, people show up and work hard,” she said.

More than 8,000 redbud tree saplings are going into the ground this year at schools, parks and cemeteries, thanks to Reforest Richmond, the Green City Commission’s Tree Committee. Reforest Richmond targets heat islands and “restoring the tree canopy with an equity lens,” said Daniel Klein, its vice chair.

Over time, thanks to these environmental advocates, Richmond will become a greener, cooler and better place to live.