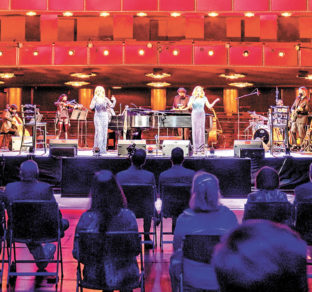 A small, socially distanced audience, seated on-stage, attended "An Evening with Renée Fleming and Vanessa Williams" at the Kennedy Center in September. But others can watch it on-demand through the end of the year at kennedy-center.org.
PRINT

“Gathering to hear a story is a basic human need,” said Edgar Dobie, Arena Stage’s executive producer and president. Amid challenging pandemic protocols, gathering has been a fleeting fantasy for most, but some area theaters are re-opening with limited and re-imagined programming.

“Creativity thrives under constraint,” Sueko added. “Problem solving is what we love to do.”

The mechanics of producing plays are evolving as everyone continues to learn about the disease with no vaccine and changing protocols.

Most are not selling food or beverages. All expect to continually modify conditions appropriate to the venue and program type.

Many theaters have moved to digital offerings. Studio Theatre is filming and streaming two productions in 2020. Ford’s Theatre’s classic, A Christmas Carol, will be a radio version. Ford’s dates for other plays are undetermined, as are those for Toby’s Dinner Theatre. Toby’s holiday production of ELF, The Musical, will be staged in July.

With its unions, Arena Stage developed a 64-page safety manual, approved by D.C. officials. Managers will make its three theaters and the walk to them safe, they stress, with comprehensive cleaning, upgraded air filtering, and restroom doorknobs replaced by automated latches.

Starting in January, Arena will stage plays in one of its three theaters at a time, with the audience at 40% to 50% capacity. The Kogod Cradle, which normally seats 210, will only have 94 people; the Kreeger, which normally holds 500, will allow 225; and the 683-seat Fichandler will host 315.

Seating “will be a science,” Sueko said, with the closest person two seats away. Except for families, “there will be no one in front, behind or beside you,” she said.

As for content, Arena’s fare will fit the times, Sueko said, with resilience permeating several plays. Life After is about a young woman who grapples with her father’s death but finds a life-affirming path.

A new musical, American Prophet, presents abolitionist-orator Frederick Douglass in his own words, with new songs like “A More Perfect Union.”

Toni Stone tells the story of the first woman to play professional baseball in a men’s league. “The pandemic this year is entwined with the virus of racism,” Sueko said, and “Toni Stone uses baseball to speak the truth about being Black in America.”

The arts are especially important during these uncertain times, Sueko believes.

“I hope that every individual has the opportunity to live a full and robust life, and that means with joy, laughter, companionship, community, art, exercise, the fullness of life. I want people to invest in themselves, and I hope that we are helping them have a full life.”

On September 26, the Kennedy Center staged “A Time to Sing,” its first performing arts event since the March 13 closure. Renée Fleming and Vanessa Williams sang before 42 people on a special stage built over the orchestra area, 30 feet from the audience. (A video of the performance may be watched online for $25.)

The performance was the first in a series of 70-minute concerts involving small groups of artists who stay six feet apart on the stage. For these performances, guests enter the Opera House through the wide loading doors on the front plaza, have their temperatures checked, and sit on the stage in physically distanced pairs facing the hall’s red interior. There are no intermissions.

The 42 guests represent just 2% of the theater’s capacity. Guests park outdoors and elevators are limited to three people at a time. The audience area’s ventilation system has four complete air changes per hour and the performance area has five.

Managers conduct daily COVID-19 tests for all artists, crew and staff members who work within six feet of another person or perform without a mask. All of them must self-certify they are symptom free before entering the building and get temperatures checked daily with a no-touch thermometer.

Kennedy Center personnel conduct contact tracing for staff, artists and contractors, and report any positive tests to the D.C. Department of Health for follow-up.

On select evenings, the Reach (its new performance area a short walk from the main building) has featured music, dance and an outdoor film screening. The Kennedy Center has also offered a range of online programs this fall; most are free.

“Safety for those on stage, behind the scenes and in the audience is our highest priority as we work to bring back the arts onto our stages.

“We do hope you join us in person at one or more of our live events. And if you don’t feel comfortable just yet to attend a live performance, we hope you take part in our digital offerings on our channels, showcasing artists from here in D.C. and from around the country.”

What does 2021 hold? Studio Theatre’s Managing Director Rebecca Ende Lichtenberg offers a look: “We have reimagined our programming through the summer of 2021 to maintain the immediate connection between artist and audience across new platforms and in new ways that allow us to create and share art safely,” she said.

“We don’t imagine a return to ‘normal’ producing until a vaccine has been distributed to the population.”

The Kennedy Center will have what President Deborah Rutter calls an “ambitious but limited season,” starting January 14. She emphasizes that “programming will remain flexible,” contingent on pandemic guidelines.

“We’re driven by ‘The show must go on,’” said Arena Stage’s Dobie. “And that will be the case until it’s not safe or healthy to do so.”