Smoky Louisiana sausage has its own trail 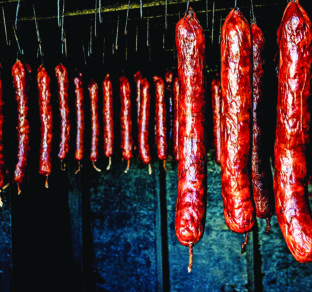 Louisiana’s Andouille Trail is an online map of more than 30 restaurants where patrons can buy, eat and even learn to make the spicy sausage. Photo by River Parishes Tourist Commission
PRINT

Now the River Parishes, which straddle the Mississippi River between New Orleans and Baton Rouge, have created an Andouille Trail, an online map showing where you can buy, eat and even learn to make andouille.

Germans came to this area, which used to be called the German Coast, in the early 18th century. Their sausage-making skills combined with the cooking acumen of French and Black residents created the Cajun andouille. Engulfed in smoke, andouille sausages cook in a traditional smokehouse.

“You can literally taste the flavor of the place and its history in a bite,” Boe said.

Launched in September, the Andouille Trail was inspired by similar maps to bourbon in Kentucky and ale in Asheville, North Carolina.

A legend on the website lets you know who sells the sausage, who ships it and who cooks with it. Any restaurant with an andouille dish on its menu can be part of the trail.

Five of the 34 stops currently on the trail are in Vacherie, including La Bon Boucon. The business, the name of which owner Lester Folse said translates to “The Good Smoke,” opened in April 2017 in what used to be a bakery.

La Bon Boucon offers smoked and fresh meats, jerky and sausage, including what Folse said is a local specialty, maudlin, which he described as andouille sausage, only larger, resembling a processed ham. Folse sells whole maudlins and also vacuum-packs it pre-sliced, for use as either a cold cut for sandwiches or a breakfast meat.

“I’ve sold about 400 of those this year,” he said. “The only place you’ll find it is in Vacherie. There were meat markets all along here who would only make it for the holidays, for the people who couldn’t afford hams. I make a chicken one as well.”

Other stops on the trail in Vacherie include Oak Alley Plantation, Spuddy’s Cajun Foods, DJ’s Grille and B&C Seafood Market and Restaurant.

The ZoraChristina cafe in LaPlace serves a hash with andouille, smoked pork belly, roasted potatoes, garlic and onions. Like most people in the River Parishes, owner Monique Duronslet is particular about her andouille, which each butcher makes with different spices and smokes with different woods.

She only uses andouille from Jacob’s, one of the three prominent smokehouses in LaPlace, which calls itself the “andouille capital of the world.”

The River Parishes, which include St. James, St. Charles and St. John the Baptist parishes, are often a day trip for visitors to New Orleans drawn by the swamps and plantation homes. The Andouille Trail takes tourists beyond the well-worn paths in the River Parishes.

As the head of tourism, Boe wants more area restaurants to add andouille dishes to their menus so they can join the trail and entice more food enthusiasts to visit the parishes.

He hopes visitors, after tasting andouille on a trip, will start shipping it back home. That will help the many small smokehouses, which have been making andouille for generations, keep going.

“It increases the chances of this tradition staying alive,” Boe said. “One of the things we have to do as stewards of the destination is make sure the authentic traditions stay alive and make sure it’s not the theme-park version of whatever we used to be.”