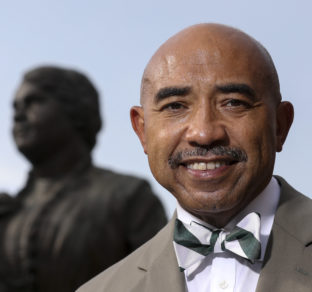 Gary Flowers hosts a live call-in radio show every weekday at 10 a.m. on 101.3 FM and 990 AM. He frequently has guests, ranging from activists to artists to Mayor Levar Stoney. Photo by The Gary Flowers Show
PRINT 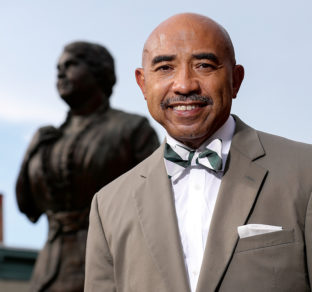 Strolling the streets of Richmond’s historic Jackson Ward with a bounce in his step and a snazzy bowtie, Gary Flowers greets almost everyone, waving at drivers and (pre-pandemic) giving bear hugs to bank employees leaving work for the day.

Flowers, who hosts a Richmond radio show, loves meeting people, which is partly why he leads “Walking the Ward” tours. “My purpose in life is to connect with people. I feel like an ambassador,” he said.

In its heyday, Jackson Ward, where Flowers grew up, had more than 100 black-owned businesses, including insurance companies, six banks, two hospitals, law offices, churches, the Hippodrome Theater, clubs and other businesses.

Over the years, however, the community changed due to black flight, indifference, systemic racism and lack of access to capital, Flowers maintains.

Flowers dreams of a revived, bustling Second Street in Jackson Ward — a return to its glory days as the epicenter of commerce and “Harlem of the South” in the early 20th century.

He envisions a thriving business corridor with a micro-business incubator, music clubs, soul food restaurants, insurance companies and even a tap-dancing institute in honor of legendary tap dancer Bill “Bojangles” Robinson, who was born in Jackson Ward.

Located less than a mile from the State Capitol, Jackson Ward was designated a National Historic Landmark District in 1978. Today, Flowers is urging the city and state to designate Second Street as a “Corridor of Culture and Commerce” to better recognize and formalize the preservation of Jackson Ward.

In his tours, radio and other work, Flowers wants to highlight overlooked Black Americans’ contributions, citing, for example, two inventors: Alice Parker, for the gas furnace, and Garrett Morgan, for a precursor to the gas mask. On his May 25 Memorial Day show, he said, “What we have to do is redefine what America is.”

“Because I care,” Flowers said. “I’m re-inserting some pages into history to include black contributions.”

Memorializing a fight for justice

At Adams and Broad Streets stands an imposing statue of Maggie Lena Walker, a symbol of African American entrepreneurship, empowerment and determination.

Walker, the first black female bank president in the country, was the daughter of a former slave, “born with a clothes basket on my head,” she once said.

After the Civil War to the 1930s, white businesses in the area refused to serve blacks, so she established a bank, department store, insurance company, Girl Scout troop and newspaper.

When the city settled on the statue’s site, a large oak tree loomed there. Flowers and others argued for the tree’s removal.

“We did not want her in the shade, in the shadows,” he said. Advocates crafted a slogan: “Do not lynch the legacy of Maggie Walker” and, as part of their campaign, they played “Strange Fruit,” the haunting, 1939 Billie Holiday song about the lynching of black Americans. The tree was removed to make way for the statue, which was dedicated in 2017.

One, a mural depicting legendary civil rights crusader and newspaper editor John Mitchell, overlooks the Walker statue. The two worked together, ran for office on a statewide ticket, and put the city’s racially segregated trolley system out of business.

On weekdays, Flowers hosts the two-hour, live call-in “Gary Flowers Show” on WREJ (101.3 FM) radio. He calls his listeners the “voices of the village.”

Callers ask questions, vent and expound on myriad topics, from current events to slavery, as Flowers gently prods them to think deeply and challenge the status quo. An announcer intersperses, “Gary may not agree with you, but he’s never disagreeable.”

Flowers ends each show with his motto: “Think deeply, speak gently, give freely, work hard, love much, laugh a lot and be kind. And when you do this, you’ll give flowers to the people.”

A career of advocacy

Flowers graduated from Richmond’s Thomas Jefferson High School and then the University of Virginia in 1985, with a major in anthropology and African American studies.

After college, Flowers’ professional path focused on advancing justice. After spending some time learning about law at Richmond’s Hill, Tucker and Marsh law firm, from 1990 to 1994, he was a special assistant to former Virginia Governor Douglas Wilder, the country’s first black governor.

Then, Flowers worked for the Lawyers Committee for Civil Rights Under Law in Washington, D.C., where he advocated for anti-discrimination policies, environmental justice legislation, and sanctions against apartheid South Africa.

Flowers monitored South Africa’s 1994 election, the first election in that country when citizens of all races could vote, which led to the election of Nelson Mandela as president. When he met Mandela, Flowers was awed by the man’s dignity. “It was like being in the presence of a pharaoh,” he said.

Next, he worked in Chicago as national field director and then vice president of Jesse Jackson’s Rainbow PUSH Coalition. Later, he moved back to D.C. to be chief executive officer of the Black Leadership Forum, an alliance of 51 organizations.

After 23 years away, in 2014 Flowers returned to his hometown to be closer to his now 96-year-old mother and 63-year-old sister, who is blind.

Flowers formed a consulting company, started his radio show, and took up the cause of elevating Jackson Ward and its rich history.

Much of the neighborhood suffered from neglect and lack of investment between 1970 and 2000. But Flowers said he’s seen a gradual resurgence of businesses and community spirit. Still, he fears that gentrification could destroy the historic fabric of the Ward.

On the trail of history

As the immediate past vice president of the Historic Jackson Ward Association, Flowers wants to keep alive his boyhood memories of the Jackson Ward he roamed, where he knew everyone, even famed civil rights attorney Oliver Hill, whom he called his “second grandfather.”

Hill, a prominent black attorney who fought against racial discrimination, helped win the landmark 1954 Brown v. Board of Education case, where the U.S. Supreme Court held that racially-segregated public schools are unconstitutional. Flowers recalls seeing Hill at Ebenezer Baptist Church when he was a child: “He would pat me on the head.”

Today, Flowers’ “Walking the Ward” tours highlight 20 spots, including the historic Sixth Mount Zion Baptist Church, founded in 1867 by a former slave; the renovated Hippodrome Theater, which opened in 1914 and hosted stars like Duke Ellington, Louis Armstrong and Ella Fitzgerald; the Maggie Walker emporium; and the Leigh Street Armory, now the Black History Museum and Cultural Center of Virginia.

Pointing to the six-lane Interstate 95 on the neighborhood’s north side, he lamented how it displaced families and physically divided Jackson Ward. In many cities, he said, interstates were deliberately built through minority neighborhoods.

Flowers’ tours often end with soul food at Mama J’s Kitchen on First Street in the heart of Jackson Ward, where everybody knows everybody, especially Flowers.

“My mama taught his mama,” he boasted, greeting the manager, Lester Johnson. He encouraged everyone to try the fried chicken, classic macaroni and cheese, and slow-cooked collard greens.

For Flowers, dining at Mama J’s is coming home to a community he cherishes, where the “ambassador” gives “flowers” to the people.

Listen to the Gary Flowers Show at rejoicerichmond.com and download descriptions of his Walking the Ward tours at walkingtheward.com.