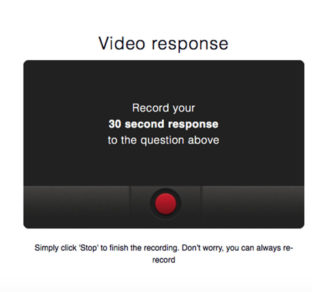 Allan Horlick enjoyed a whirlwind career as a television producer that had taken him from managing the NBC television station in Washington, D.C., to launching CNBC and NBC Asia from Hong Kong, and then serving as president of CNBC and NBC Europe, based in London.

When he turned 50, he decided to retire from all that, and return to America to golf his days away in Florida.

“I did that for about three months and I went crazy,” said Horlick, now 71. “I tried retirement and I completely screwed it up.”

Instead, he headed back to the Washington area to work as president and general manager at CBS.

Then he started his own consulting company — not his first or last startup. By his own admission, Horlick is “addicted to starting new businesses.”

In June, Horlick launched yet another new company, TalkBackTime, which allows survey respondents to submit short videos that flesh out their answers.

Instead of just checking a box, people can use their smartphone, tablet or computer to submit a 30-second video of themselves and elaborate on an answer.

The idea for TalkBackTime was born in a local Starbucks. Five years ago, Horlick met former colleague Bob Okun for coffee, and Okun mentioned an idea to capture voter feedback about the presidential campaign via video.

“That conversation morphed into a company we started,” VoteandVideo.com, Horlick said, which became “the first iteration of what we’re doing now..”

So the two started shopping their idea to potential investors. Last year, they received a significant financial investment that enabled them to launch TalkBackTime this past June.

The company offers software as a service (known as Saas), meaning companies who use it pay a monthly subscription fee.

Customer service surveys are very common today, Horlick pointed out. “Every time I buy a meal, I’m asked to take a survey.”

While simple check-off-your-answer surveys provide “quantitative data,” such as how many people bought a product, they don’t provide “qualitative data,” the kind of information you can gather from a focus group or a conversation.

Videos that can convey a customer’s body language, expression and tone of voice provide much more of the latter than a traditional written or telephone survey could ever capture.

“To be able to look into the face of someone who probably is really happy with you — or really mad at you — you’re going to get a real sense of how they feel,” Horlick said.

Attention Beacon readers: What are you most proud of in your life? Visit bit.ly/proudest and send us a quick video — it’s easy.