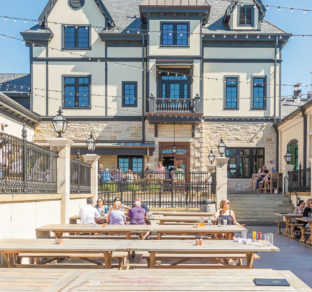 German influences such as biergartens and (pre-pandemic) Oktoberfests are ubiquitous in Fredericksburg, the heart of Texas Hill Country, settled in the mid-1800s by German immigrants. Photo by Pierce Ingram, Travel Texas
PRINT 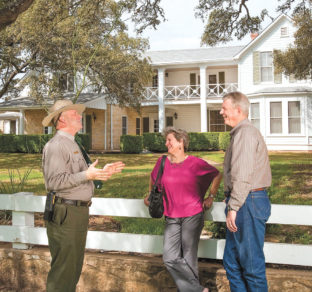 Visitors to the Lyndon B. Johnson National Historical Park can get a ranger-guided tour of the Texas White House, LBJ’s ranch in the Hill Country Photo by Steve Rawls
By: Glenda C. Booth Posted on: October 08, 2020

In the spring, a multi-hued mosaic of wildflowers brightens fields and highways. “One could travel hundreds of miles on a bed of flowers,” Texas ranger James Gillett wrote in the late 1800s.

Famous for its German heritage and dubbed the Polka Capital of Texas, Fredericksburg, in the heart of the 10,000-square- mile Hill Country, attracts around 1.2 million tourists a year. The press corps covering President Lyndon B. Johnson stayed in Fredericksburg, 20 miles from his ranch, and put it on the map.

Town leaders had to make this year’s famous Oktoberfest, their 40th, virtual on October 3 but are already planning a big one for October 1-3, 2021: three festive days of German food, beer, music and dancing.

In the mid-1800s, the Society for the Protection of German Immigrants sent 5,000 German settlers to Texas. They formed a peace treaty with the Comanches and laid out a town similar to a traditional Rhine River village, naming it after Prince Frederick of Prussia, a society member.

German settlers had farmsteads in the country as well as town cottages, called their “Sunday houses.” They would come to town on Saturday to sell their wares, go to church on Sunday, and then return to the farm. Many Sunday houses are still intact and available for tourist rentals.

You can nab a Stetson at Headquarters Hats along with Texas-size belt buckles and bolo ties. Dogologie is crammed with treats for canines, including Bowser Beer, dog “wine” and dog-themed socks.

The hometown boy who “made good,” World War II Fleet Admiral Chester W. Nimitz, is honored at the National Museum of the Pacific War. On display are a captured Nazi flag, a two-man midget submarine, and two torpedoes from Pearl Harbor.

Museum guides boast about the door from the USS Arizona, the Navy battleship that sank during the Japanese Pearl Harbor attack on December 7, 1941. “The New Orleans World War II museum only has a hinge,” one said.

Visitors also can examine a boat similar to the PT-109 that Lt. John F. Kennedy commanded. Kennedy is credited with saving 11 crew members when it sank in battle.

Videos relate the rescue of Lt. George H.W. Bush, who was forced to bail out of his bomber airplane and was the sole survivor from his squadron, a feat poignantly represented by a fragment of his yellow rescue raft on display.

Spring brings an explosion of bright blue, purple, yellow and orange wildflowers across the Hill Country, a region defined by rare plants found nowhere else on Earth.

The Hill Country has at least 400 species of wildflowers, almost half of the state’s wildflowers. Pre-ranching settlers reported a sea of Texas bluebonnets, orange Indian paintbrush and yellow Texas stars.

Expanded to 284 acres, the site, now part of the University of Texas at Austin, is also an education and resource center. It’s home to 1,800 insect species, 148 bird species, 15 mammal species and almost 900 species of native Texas plants.

“You can almost always find something in bloom,” said spokeswoman Amy McCullough.

“No president calls the White House home,” LBJ said in a 1966 NBC film tour in the visitor center of his “western White House” — an 1886 ranch house on the Pedernales River.

This ranch — located about 50 miles west of Austin, and where he recharged as president — is today the Lyndon B. Johnson National Historical Park. Here “the sun is a little brighter” and “people a little kinder…It gives me a serenity,” he said.

The eight-bedroom, nine-bathroom house is restored to how it was in Johnson’s presidential years. The always “wired” president had three televisions in the bedroom, three in the living room and telephones everywhere — so many that staffers quipped that the telephone was “an appendage.”

Here, without the cacophony and distractions of Washington, many decision-makers got the famous “Johnson treatment” — a mix of charm, persuasion and intimidation.

He also took gullible guests like Walter Cronkite and Gregory Peck for thrill rides “into” the Pedernales River, driving at high speeds across a submerged concrete bridge in his 1962 amphibious car, the Amphicar.

In the barn, tourists learn about his prize bulls, and visit descendants of LBJ’s beloved longhorns and Hereford cattle.

Visitor center exhibits detail Johnson’s childhood. He had an “angelic” disposition as a baby, walked four miles to school with his lunch bucket, and graduated from high school at age 15.

While the house is temporarily closed, today’s visitors can explore the visitor center, the 13-passenger JetStar airplane that flew the Johnsons to and from the ranch, nicknamed Air Force One-Half, and take a guided tour of the grounds.

He and Lady Bird are buried under the live oaks they loved in the ranch’s family cemetery.

Near downtown Fredericksburg are craft breweries, distilleries and more than 40 wineries. The area is an excellent grape-growing region for certain varieties that tolerate heat.

The nights cool down, and the winds reduce humidity, mildew and fungi. The Hill Country’s soil and climate are also ideal for produce like sweet, freestone and clingstone peaches.

Many outdoor types today are enthralled with Enchanted Rock, a gleaming, pink granite dome or batholith that looms large amid the scrubby oak, cedar, mesquite and Texas buckeye trees. It is a half-mile trek to the summit, where, at 1,825 feet, adventurers get a 360-degree vista of classic Texas grasslands and hills.

At Westcave Preserve in Dripping Springs, visitors can walk through an arid savanna and down into a 70-foot-tall canyon lush with plants to a 40-foot waterfall, grotto and cave.

Guides like Paul Vickery, education director, point out that the stalactites and stalagmites take 35 years to grow one inch. There are fossilized oysters in the walls, and, outside, lucky visitors might see bobcats, coyotes, ringtails, raccoons, gray foxes and cougars.

In springtime, colorful wildflowers spread across the preserve. The perfume of bluebonnets, as Vickery put it, is “the sweet smell of Texas.”

Fredericksburg is 70 miles west of Austin and 65 miles northwest of San Antonio. A nonstop round-trip flight from D.C. to Austin is currently $147 on United Airlines.

Average high winter temperatures are in the low 60s; in spring, weather is in the 70s and 80s. March and April are prime wildflower watching months, but wildflowers bloom all year. Visit wildflower.org/plants-main/whats-in-season and VisitFredericksburgTX.com or call (830) 997-6523.

Start your visit at Fredericksburg’s Visitor Center, 302 E. Austin Street, watch a 10-minute video about the town, and pick up a walking tour map and other brochures.

One of the more intriguing lodging options is the Hangar Hotel at the Gillespie County Airport, designed like a World War II hangar and decorated in a 1940s aviation theme. Next door is a vintage diner.

Fredericksburg is planning old-world holiday events in December with a 26-foot German pyramid and 30-foot Christmas tree. Most shops, restaurants and attractions are currently open, based on the Texas governor’s guidelines. The “Protect FBG” campaign encourages masks and social distancing.