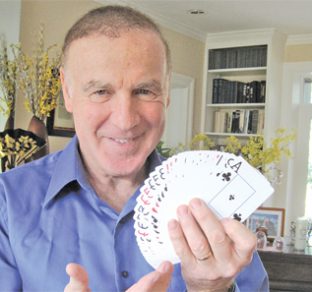 At age 7, Rich Bloch was hired to work as an apprentice in a New Jersey magic shop. Sixty years later, Bloch — a Washington labor arbitration attorney by day — continues to pursue the art of illusion with just as much enthusiasm as the little boy who stood transfixed watching the owner of the shop perform magic.

“There was a magic shop on the corner of the street, and there was a guy doing absolute miracles, and I was hooked,” Bloch recalled.

Bloch decided that he desperately wanted to work there and suggested to the owner of the store that he hire him. The man asked him what experience he had. Being 7, he had none, of course.

“So I lied to the man. I said, ‘Well, I don’t have any experience but my father’s a great magician.’ And he said, ‘Really?’ and I said, ‘Yes, his name is Ted Collins,’” using the name of a magician Bloch had heard of.

“The guy was very impressed and he said, ‘Wow, if your dad is Ted Collins, you can work here — come after school and on weekends and I’ll teach you.’”

Bloch said he was thrilled, but as he was leaving the store, he realized he didn’t know the man’s name. “I turned to him and I said, ‘What’s your name?’ and he said, ‘Ted Collins.’”

Bloch worked as an apprentice at the magic store for eight years. When he was 9, he was hired as an assistant by one of the shop’s regular customers, Dick Dubois, who starred as Bonomo the Magic Clown on local television.

His professional work as a magician continued while attending Dartmouth, where Bloch received a bachelor’s degree, and law school at the University of Michigan.

Bloch has worked hard to perfect his act, and 30 years ago he hired Davey Marlin Jones, a local director and drama critic, to help him become more comfortable on stage.

“I said to him, ‘I know everything I need to know about magic, but I don’t know anything about being on stage.’”

Bloch said the two became close friends and he credits being schooled in the “acting skills” by Jones with significant improvements in his stage performances.

In addition to performing magic, he owned for 18 years a manufacturing company that created props for magicians. Bloch is also the inventor of more than 80 magic effects.

Bloch has collaborated with well-known magicians, including David Copperfield and Siegfried & Roy. The legendary Orson Welles, who hired Bloch as a scriptwriter and consultant, once referred to Bloch as “an Edison of magic.”

Bloch said he is equally passionate about the two widely disparate aspects of his professional life.

“My [law] practice is being an arbitrator in labor disputes. It’s kind of like a private judge, and I absolutely love it. I really enjoy the people I work with,” he said.

“I mean, I don’t do card tricks for my law clients,” he joked, adding, “It’s very strictly separate. And it’s really because I want them to be my own worlds that I can enter or leave at will.

“And if I’m frustrated in one area, I don’t want to lose the excitement and the interest of the other.”

Bloch and his wife, Susan Low Bloch, a law professor at Georgetown University, live in northwest D.C. The couple met in high school and dated through college; they were married in 1966. They have two grown children, who are both attorneys.

“From the magic standpoint, aside from the terrific fun of entertaining, it’s been kind of a family affair,” Bloch said. His wife joins him onstage in the role of magic assistant, and their children joined them on many of his tours to perform all over Europe and Asia.

Max joined the family last December. He is a blue hyacinth macaw that assists Bloch in doing card tricks.

These days the couple is choosing to perform a bit closer to home. Last summer they opened Dickens Parlour Theater in Millville, Del., five minutes from their summer home in Bethany Beach.

And in December he will be performing his “Best Kept Secrets” show at the Woolly Mammoth Theatre in Washington.

He pointed to the heavy bags containing his magic equipment and said, “Traveling now is just very difficult with the strict airport security…and so increasingly I felt, wouldn’t it be great to have a place where people can come to us instead?”

The entertainment factor is all-important to Bloch, who describes himself as a parlor and stage magician. “I go for humor. If people are having a good time laughing, then that’s what I’m after,” he said.

“I regard the magic as props that will help me do that, rather than trying to present myself as a latter day Merlin.”

When asked to show me one of his tricks, he took a deck of cards and fanned them out, asking me to choose one and write my name on it. I observed the card closely as it went back in the deck.

Then Bloch picked up a box of Altoids that had been on a coffee table and opened it to reveal the card with my name on it, neatly folded up. He laughed at my amazed reaction when I exclaimed, “Wow! How in the world did you do that?”

But, of course, that’s just one of Bloch’s many secrets.