Tina Panetta, Mother on the Hill 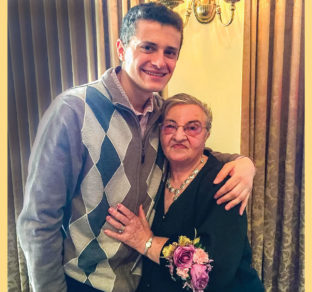 As a beloved waitress for more than 20 years in the U.S. Senate Dining Room, Italian immigrant Tina Panetta served and mothered senators and their celebrity guests. Her grandson, Gian, left, wants to honor Panetta, now 95, by hanging a portrait of her in the dining room where she worked. Photo courtesy of the Panetta family
PRINT

Years ago, though it’s hard to imagine today, Republican and Democratic senators used to sit at the same table to share a meal in the Senate Dining Room.

They would cross the aisle just to talk to beloved waitress Tina Panetta, an ebullient Italian mother and grandmother.

“We talked like family, like brother and sister,” Panetta, now 95, recalls of her 23-year career serving politicians and their guests — celebrities like Dick Clark, Joe DiMaggio, Don Rickles and Bob Newhart.

“For me, those people didn’t look like senators; they looked like a brother and sister,” she said. “I remember everybody. They were so kind; I got so much joy” from the job.

And she has been regarded as special by many politicians in turn. The late Vice President Hubert Humphrey once said, “If the Senate Dining Room is the heart of the Senate, Tina Panetta is what made it beat.” Senator Alan Simpson of Wyoming called her the “Queen of the United States Dining Room.”

Now her grandson, Gian Panetta, wants Panetta to be remembered as the “Mother on the Hill.” He launched a petition drive last fall to honor her and her coworkers with a plaque or portrait in the Senate dining room. The former congressional intern also wants President Biden to acknowledge his grandmother in a State of the Union address.

Gian Panetta has been working on this project for several years, ever since a memorable visit to his grandmother’s apartment in Silver Spring, Maryland.

“She was telling me her stories, and she started breaking down, crying, saying, ‘Please don’t forget about me when I’m gone.’

“I promised her. I said, ‘Nonna, I promise I won’t let the country forget about you.’”

By all accounts, Panetta hasn’t been forgotten. In fact, at Gian’s suggestion, on Jan. 8, 2020, U.S. Rep. Jamie Raskin recognized her in a speech on the House floor. Thanking his constituent for her decades of public service, Raskin recounted her journey from Italian immigrant to American citizen.

“At a time of polarization, Tina’s story reminds us of our common bonds, both in Congress and in the country,” Raskin said.

From poverty to politics

Panetta’s life followed the arc of the classic American dream. As Sen. Paul Simon of Illinois said on the Senate floor in 1990, the year she retired, “Her life story is the story of America.”

Panetta grew up in a poor village in central Italy called Ovindoli. Desperate for work, her husband emigrated to Venezuela, leaving her alone with their two children for five years. When he returned in 1955, the couple decided to join relatives in America.

The family settled in Washington, D.C., where Tina quickly found a job at Sholl’s Cafeteria. They became citizens five years later. In 1968, her brother landed her a position waiting tables at the Senate Dining Room, where he was head chef.

Although Panetta found it “humiliating” that she wasn’t fluent in English, she quickly became a favorite waitress, thanks to her affectionate manner. “You make everybody happy,” she remembers her manager telling her after a week on the job.

Senators would request her table and introduce her to their families, who often joined them for breakfast. Some brought her presents when they traveled abroad.

Sen. Phillip Hart of Michigan, for whom the Hart Senate Office Building is named, once presented her with a wrapped letterbox from Italy, she recalled.

“I kiss him, hug him, I open up the box, and I said, ‘Senator, you mean you went to Italy to buy an empty box?’ So he cracked up.”

With a smile and a kind word for everyone, Panetta soon became close to politicians and their families. She served honey every morning to Sen. Russell of Georgia, for whom the Russell Senate Office Building was named in 1972.

When Sen. Bob Dole of Kansas asked her for marriage advice, she suggested he marry Elizabeth — and was later invited to their wedding.

She babysat for the children of Sen. Ted Stevens of Alaska, whom she nicknamed “Blue Eyes.” When she broke her arm, almost all the senators signed her cast. Sen. Chuck Grassley of Iowa still sends her a Christmas card every year.

And Panetta remembers now-President Biden well. “I remember when his wife died, and he came in the dining room with his two boys in their little suits,” she said. “He’s a very nice guy. He talked very kind, very gentle.”

Panetta tended to senators under five presidents, her smile as reliable as the Senate bean soup she served every day.

She retired reluctantly in 1990, at her husband’s request, to spend more time with their grandchildren.

“When we left, they gave us a big huge party. I didn’t want to quit,” she said. “But that’s all done, and it broke my heart.”

Upon her retirement, many senators thanked Panetta — in public speeches and in personal letters — for being kind, helpful and friendly during her decades of public service. Her grandson, Gian, pointed out that kindness worked both ways.

“My family’s success can be traced back to the tangible actions the senators took to make sure my family was successful in America,” he said, citing internships, jobs, letters of recommendation and even economic support.

To preserve his grandmother’s life story, Gian Panetta has produced a two-minute video about Panetta and her memories. He scanned the faded photos and handwritten letters she had collected, preserving everything online. He was also interviewed for a podcast last year, describing his grandmother’s impact.

Gian Panetta hopes his efforts will catch the eye of Sen. Patrick Leahy of Vermont, chair of the Rules and Administration committee, who can approve the installation of a plaque to honor the working-class women of the Senate Dining Room.

In a letter to Tina Panetta, Leahy wrote, “You were a great asset to the Senate, and we miss you.”

Panetta brought people together, her grandson said, and that’s worth honoring. “She doesn’t understand the politics,” he said. “She just sees the people.”

To sign the petition for a marker to honor Panetta and other working-class women in the Senate Dining Room, visit bit.ly/TinaPanetta.