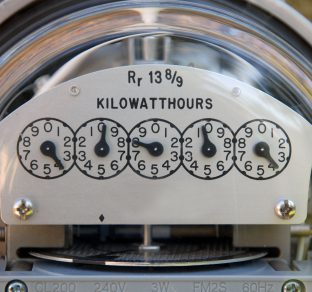 There’s plenty to like about utilities companies. Investors looking for stability will find their stock returns aren’t as choppy as the broader market, and they’re a source of reliable dividend income.

Those traits are an outgrowth of the typically stable demand for electricity and natural gas. Homeowners and businesses keep the lights on, and the heat or air-conditioning running, in good economic times and bad.

Government deregulation of utilities has shaken things up, but it’s still a stable industry compared with most. The relative predictability of utility profits means stocks tend to follow a steady path of modest returns, with few of the surprises that can make stocks in other industries zigzag.

In this year’s market decline, it’s utilities that have topped the charts for growth. Stock mutual funds that specialize in utilities are the top-performing stock mutual fund category, with an average 4.2 percent return, according to Morningstar.

Nearly all other fund categories are down, and the Standard & Poor’s 500 stock index has lost 3.4 percent, including dividends.

Investors have recently bid up utility stocks because they’re seen as a safe investment when the rest of the market is declining, Morningstar analyst David Kathman said.

Another plus? Their dividend yields look especially appealing now. The average dividend yield of the 33 utility stocks within the S&P 500 is 4.4 percent. That’s twice the average yield of the index. By comparison, the 10-year Treasury bond offers only around 2 percent.

“Lots of people are looking for yield, and they’re wary of bonds now, so utilities look attractive,” Kathman said.

The dividends for utilities have been rising since the market’s initial downturn in September 2008. Dividends paid by utilities rose nearly 21 percent versus a nearly 7 percent decline in dividends paid by S&P 500 stocks as a whole, according to Ned Davis Research.

But, in typical fashion, utility stocks haven’t participated in as much of the market’s rebound since March 2009. They’re up about 50 percent since the market bottomed out, yet that lags the 80 percent gain for the S&P 500 through the end of August.

Despite utility stocks’ recent strong performance, there’s reason to believe it may not last. That’s because Wall Street analysts are less optimistic about their earnings prospects than they are for other industries.

On average, analysts expect utility earnings to decline 2 percent next year compared with this year. Earnings across the S&P 500 are forecast to rise an average 14 percent.

Here are three things investors need to consider about utility stocks and the funds that invest in them:

1. How much should you invest? Utilities make up about 3.7 percent of the market value of the S&P 500 index. If you invest in a fund that tracks that index, you have a built-in stake in utilities. Many diversified funds also invest in utilities.

If you want to check your total exposure, Morningstar’s website offers a tool called Instant X-Ray to provide a snapshot of holdings across your portfolio. See www.morningstar.com.

A utilities investment a few percentage points above 3 or 4 percent of a stock portfolio may be appropriate if an investor is in or near retirement and wishes to emphasize stocks offering dividend income, and low volatility.

2. What are your investment options? Investors looking to invest in utilities can buy individual stocks or invest in nearly two dozen mutual funds that specialize in utilities. Some are low-cost index funds that passively track an index of utilities stocks.

One such offering is Vanguard’s Utilities Index Fund (VUIAX), which charges an expense ratio of just 0.24 percent. Others are actively managed and pricier, because they rely on the expertise of investment-picking pros. Morningstar’s current favorite is Franklin Utilities (FKUTX).

Some funds limit their investments to stocks of U.S. utilities, while others venture overseas, buying foreign utilities. Some add telecommunications stocks into the mix, such as BlackRock Utilities and Telecom (MDGUX).

More than a dozen exchange-traded funds (ETFs) specialize in utilities, and charge low expenses because they track indexes.

S&P’s fund research team currently gives top marks to Utilities Select Sector SPDR Fund (XLU) and WisdomTree Global Ex-US Utilities Fund (DBU). S&P’s ratings are based on factors such as a fund’s expenses as well as S&P’s analysis of the quality of the stocks in a fund’s portfolio.

3. Are there regulatory risks? Utilities remain one of the more heavily regulated industries, despite the deregulation trend of the past few decades. That means utilities stocks could depart from their generally stable trajectory if there are significant regulatory changes.

Many utilities are trying to meet government mandates to go green. They’re looking for ways to decrease reliance on non-renewable sources of energy such as coal and oil, and expand use of renewable sources such as solar and wind power.

Regulators also have imposed requirements that utilities improve the reliability of the electricity grid.

John Kohli, manager of Franklin Utilities Fund, said such requirements present growth opportunities for many utilities. Although the utilities must increase spending to meet the mandates, they typically can recover the higher costs through rate increases passed on to customers, he said.

However, regulators could become less inclined to approve such rate increases if the economy slips back into a recession, Kohli said. If that happens, regulators may want to protect consumers from rate hikes, given the other economic stresses.

But on the whole, Kohli sees opportunity for utilities to become more profitable, as they invest more to make their operations more environmentally sensitive, reliable and efficient.

“Fundamentally, the sector is in good shape,” he said, “and we expect decent growth for the next decade at least.”