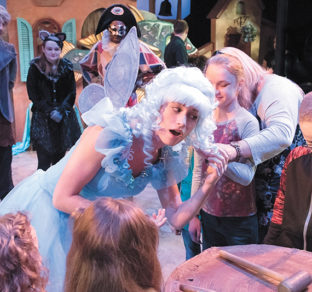 Before a live performance at Virginia Rep, blind audience members meet the actors and are given a tactile tour of the set. During the play, Virginia Voices volunteers narrate the action for them, transmitted through wireless headsets. Photo by Tom Topinka
PRINT

When Debra Hill was in her 50s, living an independent lifestyle and working on her doctorate in education, she had a heart attack, developed diabetic retinopathy and lost her eyesight.

“It made me really depressed; made me feel isolated,” Hill said. “I felt I was losing touch with the world.”

And then she found what she called a “lifesaver” — Virginia Voice, a Richmond nonprofit founded in 1978 that provides audio services to people who cannot independently read because of vision loss or other disabilities.

The 100 volunteers at Virginia Voice read and record publications, including newspapers, magazines, journals and articles, which are then broadcast around the clock, 365 days a year.

Hill is one of 6,000 listeners within a 40-mile radius of the city who receive a special, pre-tuned radio that receives only Virginia Voice’s broadcast via closed circuit.

“Virginia Voice really enhanced my life,” Hill said, “because I felt I was once again re-engaged with what I truly love — knowledge and information.”

Another loyal listener, Virginia Forster, 86, had a hemorrhagic stroke three years ago, which damaged an optic nerve and left her with a limited field of vision. Now legally blind, she can barely see four or five letters in print at a time.

Yet Forster keeps up with the news by listening to Virginia Voice volunteers reading the Richmond Times-Dispatch every morning in addition to programs like “People’s Pharmacy” and “The Book Hour.”

Virginia Voice’s services “make me feel human and help me do some of things I used to do.” Forster said. “Plus, I can be introduced to new things, including things I never would have thought of. You can’t ever stop learning.”

Hill and Forster are only two of the avid daily listeners of Virginia Voice. In a typical week, volunteers read more than 120 publications for 70 shows or programs.

At least 85% of the listeners are over 65, and most lost their vision as adults. “It can happen at any age,” Hill noted.

The services of Virginia Voice, including the closed-circuit radios, are free to anyone who is vision impaired, blind or has another disability that makes them unable to read, explained Scott Kocen, development and communications director. Even some sighted people, like people with Parkinson’s disease, may not be able to read because they cannot hold a paper still.

The most common circumstances that lead people to Virginia Voice, according to Kocen, are age-related macular degeneration, and vision loss due to diabetes or glaucoma.

Some of the listeners have aphasia, a communications disorder resulting from a stroke. “Their brains cannot decode symbols,” he explained. “Letters look like hieroglyphics.”

Virginia Voice provides a variety of programs 24 hours a day, including “What’s Cooking,” “World Traveler,” “Offbeat Humor” and articles from Cosmopolitan, Reader’s Digest, Popular Science and, of course, Fifty Plus. “We try to program something for everyone,” Kocen said.

A staple every morning is the Richmond Times-Dispatch. Two volunteers read the newspaper’s A and B sections live, including obituaries and editorials. On Mondays, they even read grocery store coupons.

Three-quarters of Virginia Voice’s volunteers are over age 50. Some volunteers have been reading for the organization for as long as 40 years. “They’re all saints,” Forster said.

Reading requires no professional training, but it does take 45 to 50 minutes to produce a 30-minute show. Staffer Alex Childress, studio manager and sound board operator, splices out errors, mangled words or jumbled enunciation.

Sallie Wanchisn has been reading once a week for 25 years. She usually reads the “Green Thumb,” a gardening program, as well as horoscopes, advice columns and television listings from the Times-Dispatch.

At one time she read “bodice rippers,” she said — romance novels “with heavy breathing and lots of swooning” which made one listener quip, “I felt like I was there.”

Wanchisn said she “loves the feeling of outreach. I get a lot more from it than I put into it.”

In normal times, pre-coronavirus, 75 volunteers would go every week to the headquarters at 395 Azalea Avenue in Northside to record articles. During the pandemic this spring, 15 volunteers recorded from their homes.

Virginia Voice is now raising money for technology that would enable more people to record from home. The organization is supported solely by donations from corporations, foundations, individuals and civic clubs.

Hill has been able to enjoy West Side Story and A Raisin in the Sun, for example, because volunteers like Catie Huennekens volunteer as live describers at several Richmond-area theaters.

Huennekens, who by day is an administrator at North Star Academy, has volunteered since 2016. Using a stenomask, which enables her to speak but not be heard by those around her, she and a partner give a “play by play” of the performance to the listener, who wears a wireless, single-ear headphone.

It’s not something one can do well off-the-cuff. Huennekens reads the script beforehand and absorbs the main plot points, characters and subtleties first. During the play, she describes what she is seeing as succinctly as possible.

“It’s a challenge,” Huennekens admitted, to single out what is pertinent to the plot. When describing a scene in The Gentleman’s Guide to Love and Murder, for instance, she described for the listener when two women silently grabbed hands in an act of solidarity.

Huennekens, who works at a school for disabled students, loves her volunteer job because she’s “passionate about the arts,” she said. “People with disabilities have been excluded, and I believe we must increase access to all. [Audio description] is a skill I never knew I had. I love doing it.”

Volunteers also do live audio description at the Children’s Theater at Willow Lawn, the Science Museum of Virginia, and the Richmond Ballet and Sparc, a youth performance organization. At a Science Museum exhibit on Pompeii, for example, volunteers assisted staff in explaining the exhibits’ objects.

Unfortunately, audio description — like most theater — has been suspended during the pandemic.

At the same time, the pandemic has led the organization to add more health programming, such as how to exercise at home and tips on staying healthy. They partnered with Dominion Energy on programs focused on reducing heating and air conditioning costs.

Listeners view Virginia Voice as a loyal friend, a connection to the world, and a reprieve from social isolation. Programming is focused on the practical.

Virginia Voice needs at least 100 readers to produce each week’s programming, and has ongoing needs for volunteers for other tasks. For information or to volunteer, call (804) 266-2477 or email pgmdir@virginiavoice.org.