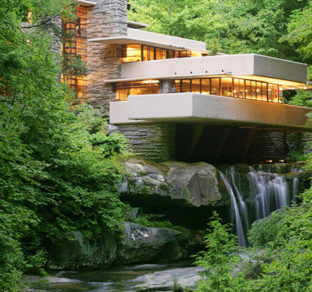 Fallingwater, perhaps the most famous home designed by Frank Lloyd Wright, draws many tourists to the Laurel Highlands region of southwestern Pennsylvania. Built in 1935, the home is open to the public for tours of various lengths. October is a peak tourist month, so advance reservations for tours are recommended. Photo courtesy of Laurel Highlands Visitors Bureau
PRINT 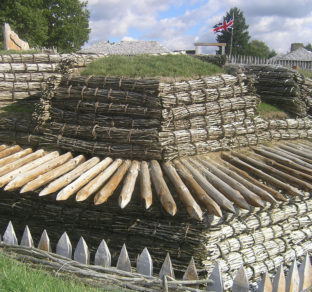 Fort Ligonier’s unusual construction, featuring bundles of sticks and basketwork to absorb shot from 18th century muskets, kept the supply depot impregnable during the French and Indian War. Every October there’s a reenactment of the 1758 Battle of Fort Ligonier. Photo courtesy of Laurel Highlands Visitors Bureau
By: Glenda C. Booth Posted on: September 03, 2019

There are many good finds in Pennsylvania’s Laurel Highlands, an undulating countryside 50 miles southeast of Pittsburgh.

The area gets its name from the flowering laurel shrubs that bloom each June. But since 2001, the area has been best known for what happened on 9/11, when hijacked United Flight 93 crashed in Shanksville, killing all aboard.

A more comforting association would be with the children’s television hero Mister Rogers, who died in 2003. Fans of Fred McFeely Rogers — the soft-spoken, fatherly host of “Mister Rogers’ Neighborhood,” which aired on television from 1968 to 2001 — can learn more about him at the Fred Rogers Center located in his hometown of Latrobe, Pennsylvania.

His popularity is currently on the rise. Last year, a successful HBO documentary about his life became the top-grossing biographical documentary in American history. In November, the movie A Beautiful Day in the Neighborhood, will hit theaters, starring Tom Hanks in a signature cardigan.

A road that’s an experience

The best way to see the Laurel Highlands is via the Lincoln Highway, the road that changed America. Built in 1913 (pre-Pennsylvania Turnpike, pre-interstate highways), it connected New York City and San Francisco, stretching 3,142 miles from coast to coast.

In its heyday between 1913 and 1940, it fostered car travel and roadside enterprises like gas stations, restaurants and motels.

The 200-mile central Pennsylvania section of the Lincoln Highway has gentle hills, long slopes and remnants of roadhouses situated on mountaintops so car radiators could cool down after the climb.

Order a driving guide ahead of time and you can explore the highways’ neon signs and funky architecture, like old Burma Shave signs and Bedford’s 18-foot coffeepot, built in 1927. It’s much more than a road; it’s an experience, promoters say.

The Lincoln Highway Experience museum, also in Latrobe, provides an education in the old days of auto travel in a former tavern and stagecoach stop. Here nostalgia seekers can see vintage gas pumps, a tourist cabin and a 1937 Packard.

The average car speed in 1924 in Pennsylvania was 12 to 15 miles per hour, and gasoline cost 24 cents a gallon in 1950, according to exhibits. With their $14 admission ticket, visitors get a Lincoln Highway driving guide and are invited to enjoy a piece of pie and coffee in a restored 1938 diner.

A stagecoach and fort

In nearby Laughlintown, the restored log-and-stone Compass Inn and Museum was a stagecoach stop from 1799 to 1862. President Zachary Taylor and Senator Henry Clay stayed at the inn and tolerated rules like “Beds must be shared,” “Do not expectorate on the floor,” “Remove boots before crawling into bed” and “All singing and boisterous talk must cease by 9 o’clock.”

Docents in period dress explain that the on-site stagecoach from the 1830s carried 12 to 15 people, and that horses went full gallop downhill to this stop, where drivers changed their steeds.

The site also has a beehive oven, a blacksmith’s shop, and an 1830s Conestoga wagon that was “powered” by a walking teamster and six horses. Admission is $9 (with a discount for those 65+).

Just up the road, Ligonier is a walkable, picture-postcard town with a made-for-Hollywood town green lined with boutique shops and restaurants. The town is most famous for its reconstructed Fort Ligonier, an active supply depot from 1758 to 1766 during the French and Indian War.

Every October, British, French and Native American re-enactors fill the town for Fort Ligonier Days (this year on October 11-13), commemorating the 1758 Battle of Fort Ligonier, a successful defense from a French attack.

Fort guides will expound on 18th-century military fort engineering. One explained its French style, stressing that the French were the military engineers of the day (and that the Brits “stole” their techniques). Admission is $12; $10 if 62 or over.

Half an hour away, the Westmoreland Museum of American Art in Greensburg displays art by Mary Cassatt, Winslow Homer and John Singer Sargent, in addition to a 1905 Tiffany window and bronze sculptures from late 19th century.

Many of the artists’ works depict southwest Pennsylvania scenes: glowing, steel mill smokestacks and workers arriving for the night shift. Admission is free.

A bucket-list favorite is Fallingwater, the famous Frank Lloyd Wright masterpiece built over Bear Run’s waterfall as a private home. Wright integrated the house into the natural landscape, reflecting his passion for Japanese architecture.

A National Historic Landmark, its famous cantilevered terraces harmonize with nearby rock formations, and the sound of water permeates the site. Basic tours are $30 per person; more in-depth tours, some including brunch, cost $150 per person or more.

One of the country’s newest and most powerful national memorials opened in the Laurel Highlands in 2015.

The pastoral countryside near Shanksville was anything but that on September 11, 2001. At 10:03 a.m., United Airlines Flight 93 crashed and caught fire in a farm field, killing 40 passengers and crew members and four al Qaeda hijackers. The terrorists’ presumed target was the U.S. Capitol, 18 minutes away. But passengers and crew overcame them, presumably leading to the downing of the plane in the field.

The somber Flight 93 Memorial looms on a windswept, grassy hill, honoring those killed. The site’s design by Paul Murdoch includes a black granite walkway that evokes the flight path, and a nearly mile-long walk to a wall of names and an overlook of the crash site.

At the 93-foot-tall Tower of Voices, 40 individually tuned steel chimes ring in perpetuity for the deceased.

Museum exhibits tell the story of that dark day, minute by minute. In perhaps the most moving exhibit, visitors can listen to actual telephone conversations of passengers who called loved ones and authorities (13 people made 37 calls).

One woman told her sister where to find her will. A wife assured her husband she was fine but warned that something strange was happening. And the recovered cockpit voice recorder captured the screams, struggles and breaking glass inside the airplane.

After contemplating Flight 93, a visit to the Fred Rogers Center in Latrobe, a 50-minute drive away, can be soothing.

The Fred Rogers Center for Early Learning and Children’s Media, located on the campus of Saint Vincent College, displays four of his signature cardigan sweaters, original puppets like Daniel Tiger and X the Owl, and the show’s anthropomorphic trolley. Admission is free.

A Presbyterian minister, Rogers took his preschool viewers on field trips to factories, explained how bulldozers work, and tenderly advised them on topics like mistakes, conflicts, fears, loneliness, illness and loss.

“When I was a boy and I would see scary things in the news,” Rogers once said, “my mother would say to me, ‘Look for the helpers. You will always find people who are helping.’”

The Laurel Highlands is situated 200 miles from Washington, D.C., and Fort Ligonier is 17 miles from the Pennsylvania Turnpike. Roundtrip flights to Pittsburgh on American Airlines in September start at around $260. For more information, visit laurelhighlands.org or lhhc.org.