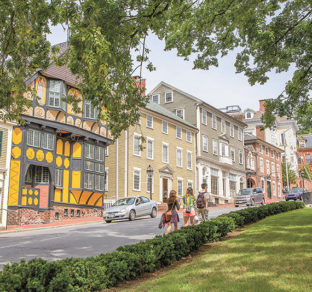 But travelers who seek out this tiny-but-mighty state are rewarded with quaint accommodations, uncrowded attractions and one-of-a-kind cuisine.

My partner and I set out from Baltimore on a blustery fall day last year, content in the cozy silence of an Amtrak Northeast Regional quiet car.

We pulled into Providence Station six hours later and caught an Uber to Bristol, an easy 20 miles and 200 years down the road.

Quaint, seaside towns are not difficult to find in Rhode Island. Narragansett and Newport are among the most popular, but we chose Bristol for its proximity to the capital city of Providence.

We wanted to explore historic houses, so we were excited to find one we could sleep in: the Bradford Dimond Norris House, a Federal-style mansion in the heart of downtown. This B&B is 228 years old but feels remarkably clean and modern.

Next door to the BDN House is the crown jewel of Bristol’s collection of historic houses. Linden Place’s spacious mansion, ballroom, sculpture garden, carriage house (complete with a carriage!) and outbuildings were built before the Revolutionary War. To get the full experience, call ahead to make sure a docent will be on hand to give you a tour.

From Linden Place it was an easy walk to the other two properties on our list. (Bristol is quite walkable as long as the weather cooperates.) Our second stop was Mt. Hope Farm, a 127-acre National Historic Site built on land once occupied by the Pokanoket tribe — the Native Americans who lived in the area in 1620, when the Mayflower arrived.

Last, we headed to Blithewold Mansion, yet another massive home by the sea. A late-19th-century estate, Blithewold has been meticulously maintained with period art and furniture, so walking through the home feels more like a stroll through a museum. If you want to live out your Downton Abbey fantasies, book a spot for the mansion’s popular tea service.

A couple days in the country left us eager to get back to the city, so we headed to Providence. Our room at the newly renovated Graduate Providence (formerly the Biltmore) was dark and moody, like the city itself.

The hometown of famous horror writer H. P. Lovecraft and site of much Revolutionary angst, Providence feels like a mystery waiting to be unraveled.

Plan to explore by foot; the city is compact and walkable. We began our time in PVD, as the locals call it, by visiting its most beloved institution (no offense to Brown University): the Rhode Island School of Design.

The RISD Museum has a permanent collection of 100,000 pieces, which it showcases alongside student work. Make sure to stop by the gift shop for the best souvenirs in the city.

Around the block we found the Athenaeum, a historic, picturesque library housed in a handsome 1938 Greek Revival building.

We enjoyed the self-guided tour, which takes visitors on a veritable treasure hunt of cool history. Just make sure you explore quietly — the Athenaeum is still a working library.

From the library, we took a stroll down Benefit Street, Providence’s main thoroughfare. The John Brown House, Stephen Hopkins House and the Old State House face these cobblestones and could keep any history buff entertained.

If you’re looking for evening plans, Trinity Repertory Company (the locals call it Trinity Rep) is one of the most highly regarded local theatres in the country.

Unsurprisingly, the Ocean State is all about seafood — specifically the quahog, a hard-shell clam that makes a memorable chowder.

We got ours at the Lobster Pot in Bristol along with fried calamari, the official state appetizer. Rhode Island-style calamari is topped with hot peppers, served with garlic butter — and worth a try.

Another Rhode Island classic is coffee milk. Made with sweet, coffee-flavored syrup, it’s like chocolate milk for grown-ups.

We fell in love with it at a diner called Olneyville N.Y. System, where you can also indulge in a hot wiener (insider tip: Do not call it a hot dog, and do not ask for ketchup) with salt-and-vinegar fries.

If meat is not your thing, Providence delivers with Plant City, the country’s first all-vegan food hall. Featuring four restaurants, a coffee bar, bakery and small grocery store, Plant City has something for everyone, even for skeptics.

If you try one meal in Providence, let it be the cacio e pepe at Double Zero. The thick noodles coated in cashew cream sauce will change your life — or at least your misconceptions about vegan cuisine.

Elsewhere, we were impressed with the service and French toast at Nick’s on Westminster, and the opulent dining room at the Dorrance. If you’re hungry in Rhode Island, you’re doing it wrong.

We did it right, I can happily report, and were stuffed for the duration of the train ride home. At the end of our journey, we were full of seafood and stories, and ready to let everyone in on the East Coast’s best-kept secret.