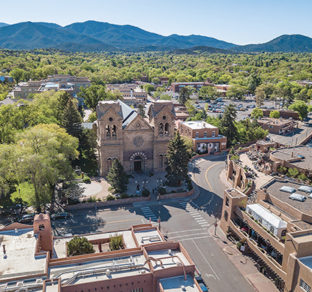 The 1886 Cathedral Basilica of St. Francis of Assisi is the centerpiece of historic downtown Santa Fe. The church, established 400 years ago, has been rebuilt several times on the same site. Photo by New Mexico True
PRINT

A first-time visitor to Santa Fe may initially view the city as Taos on steroids. That observation does tell part of the story — but only part.

New Mexico’s capital city and its neighbor share many attributes, but also have their differences. Therein lies the appeal of seeing both places in a single visit; Santa Fe is about an hour and a half south of Taos.

Santa Fe is known largely as a “big, little city” with multicultural roots and a focus on visual arts. More than 200 galleries represent artists whose works range from funky to fine, pre-Columbian to post-modern, European to Native American.

Like Taos, the heart of Santa Fe is its plaza, as it has been since 1610. The square is dotted with pushcarts from which vendors peddle snacks and various wares.

Native American artisans gather beside the Palace of the Governors selling jewelry and crafts. That adobe structure, which dates to 1610, is the oldest continuously occupied government building in the United States.

Churches also tell part of Santa Fe’s story. The San Miguel Chapel was built between 1610 and 1626, and is regarded as the oldest known church in the United States. It is still open to the public (though probably not during the pandemic).

A short walk away is the Loretto Chapel. When it was completed in 1878, its builders couldn’t figure out how to construct access to the choir loft, according to legend. Nuns prayed to St. Joseph, patron saint of carpenters, for a solution. Shortly thereafter a man with a tool box appeared, built the elegant stairway that graces the church today, and disappeared without payment or thanks.

The staircase makes two 360-degree turns and has no visible means of support. It has been the subject of television programs and movies, including one titled “Unsolved Mysteries,” a Lifetime series with 16 seasons.

Other historical and cultural tidbits come to light at Santa Fe’s museums. The Museum of International Folk Art houses the world’s largest collection of that artistic style. Among its unusual exhibits are early 19th-century European toy theaters and Ukrainian straw dolls.

A short drive away is the home and studio where the legendary artist Georgia O’Keeffe lived and worked for nearly 40 years. Sections of the single-story adobe structure are believed to date to the 1730s. The house itself and the cottonwood trees outside are depicted in a number of O’Keeffe’s paintings.

Relegating O’Keeffe’s place to new-kid-on-the-block status is the aptly named “Oldest House.” Its structure rests on the foundation of an Indian pueblo which stood at the site around 1200 A.D. Roof beams have been dated to about 1646, and the building briefly served as home to a Spanish territorial governor.

Two other places that I visited became personal favorites.

The Santa Fe Botanical Garden displays both native and foreign plants and flowers that thrive in the arid New Mexican climate. Sections are devoted to roses and perennials with a meadow environment. Fruit trees that were selected for their ability to withstand dry conditions adorn the garden.

Not far away is the National Park Service’s Santa Fe National Historic Trail. In 1821, traders, who were followed by pioneers and settlers, established a route between Missouri and Santa Fe. Riders on mule- and ox-drawn wagons, stagecoaches and Pony Express made the challenging journey, traveling some 900 miles across the Great Plains. Arrival of the railroad at the trail’s terminus in 1880 ended its usefulness.

A massive bronze sculpture, “Journey’s End,” captures what may have been a common scene from the period when the trail was used: Six tired mules strain to pull a heavy wagon up a hill as a puebloan woman looks on. The trail boss points toward the end of the route, and a boy running away from the town with his dog  waves a greeting to welcome the caravan.

To me, Santa Fe lacks some of the small-town charm and laid-back ambience of Taos. Outside of the historic districts, it has a more citified, commercial facade. It also has more traffic, though it doesn’t rival the Greater Washington area.

But Santa Fe’s excellent places to stay and eat can enhance a visit. At the El Rey Court boutique hotel, adobe-style architecture on a five-acre landscaped campus echo the desert surroundings. Constructed in 1930 along the original Route 66, its recently renovated rooms are decorated with original works by local artists. Rates begin at $140. For more information, call (505) 982-1931 or visit elreycourt.com.

Santa Fe residents seeking a special dining experience often head to Rancho de Chimayo, a destination restaurant located about a half-hour drive away in the town of Chimayo.

Housed in a century-old adobe hacienda, it serves traditional New Mexican cuisine like tortilla beef wrap ($14.50) and chicken fajita salad ($13). A selection of comidas nativas (native meals) is priced from $12 to $17.75. For more information, call (505) 351-4444 or check ranchodechimayo.com.