Whales and wonder in icy Antarctica 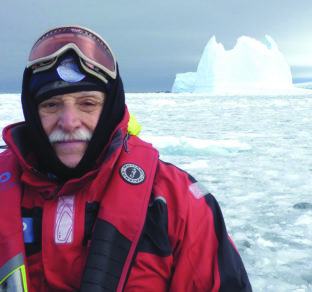 On his third trip to Antarctica, author Don Mankin is shown whale watching on an inflatable Zodiac boat. It’s the type of peak experience that has drawn him repeatedly to this land at the far reaches of the earth. Photo courtesy of Don Mankin
PRINT

One after the other, humpback whales arched their backs and slid into the frigid waters of Antarctica. As they flicked their tails in the air, rivulets dripped from the edges before they disappeared below the surface.

I stood up in the Zodiac, a small inflatable boat with an outboard motor, my camera poised for the next opportunity for a once-in-a-lifetime shot. I didn’t have to wait long. Wherever I turned, I saw whales — from spouts in the distance to nearby humps and tails glistening in the sun.

It wasn’t just the sheer number of whales in Antarctica (more than 100 or so) that boggled my mind. The marine mammals’ performance was framed by the icy splendor of mountains and glaciers in the background, along with icebergs and “bergy bits” (smaller chunks of ice) in the foreground.

Sculpted blocks of floating ice created a wonderland of blue shapes and textures, a polar landscape more beautiful to me than any other place I have ever seen.

This was my third trip to Antarctica in 17 years. I am drawn by its remoteness, beauty, otherworldliness and the sense of adventure. My first visit involved a flight into the interior and sleeping in a tent for a week. The second was an adventure cruise much like this one but without the whales.

One Ocean Expeditions, my host, dubbed the one-week trip “Marine Mammals of Antarctica.” The excursion runs in February and March, near the end of the short Antarctic summer but at the height of migration for the humpback and minke whales of the Southern Hemisphere.

We also saw the usual year-long residents, such as seals and penguins, putting on fat to carry them through the long winter months ahead, and a huge variety of polar sea birds.

Crossing the Drake Passage, the area where the Atlantic and Pacific Oceans meet, was different this time. On my last trip in 2013, I spent the entire voyage braced against the constant swaying as our boat rocked from side to side. I ended up with sore muscles, bruises from bouncing off the walls, and cuts on my face after an ill-advised attempt to shave.

This time we experienced the polar opposite (pun intended). The weather was clear and sunny, and the seas were relatively calm. Our ship was a Russian research vessel, an austere, workmanlike vessel that was nonetheless quite comfortable and attractive.

Cabins were well appointed, there was plenty of outside deck space for chilly observation, and the boat had an attractive lounge with a fully stocked bar, which included a surprisingly wide selection of single malt whiskeys.

The tour also included some expert presentations on Antarctic mammals, birds and history, as well as ice, krill and whale poop. There were several scientists on board who were studying the impact of plastic trash on marine life. How better to assess that than by analyzing whale poop? Talk about a career choice.

Once we reached the Antarctic Peninsula, the scenery was spectacular. On one of the first days, we went on an easy hike up to a viewpoint that looked out over one of the most stunning views I had ever seen.

A vast, open bay stretched in front of me. The mountains and glaciers ringing the bay were reflected in the steel gray waters. A huge iceberg with a bright blue arch that tunneled through to the other side drifted slowly in the water.

In the afternoon, we climbed into the Zodiacs to cruise around and look for seals lounging on the ice floes. We maneuvered our way around blocks of ice as large as houses, city blocks, even shopping centers. There was no noise except for the sounds of calving glaciers and the soft putt-putt of the boat’s motor.

I never grew tired of the views, which changed dramatically with the sun and clouds. On clear days, everything sparkled. On partly cloudy days, the view was more textured, creating a moody landscape of black, white and grey with occasional streaks of sunlight that turned peaks and glaciers stark white and the water bright blue.

When it was completely overcast it was spooky, hushed and otherworldly, like a landscape from a sci-fi movie set on a stark, distant planet. Often a whale’s tale injected an additional element and some perspective into the vast tableau.

On the last day before heading back across the Drake Passage, we cruised into Deception Bay, a volcanic caldera created by an eruption in 1969.

The Zodiacs dropped us off on an island that is one of the few remnants from the eruption. We hiked through the moonlike, volcanic landscape up a slope covered with pumice and rocks to the rim of a crater, essentially a crater within the crater.

With heavy clothes and gear, the climate was reasonably comfortable — warmer than the Northeast in the middle of winter. The only time I was cold was after sitting in the Zodiac surrounded by ice after a couple of hours of cruising around.

While others hiked further, I just hung around the rim of the crater, marveling at the power that created it. I was a mere protozoan in comparison.

Others took the polar plunge after the hike, running and diving into the water, then trying to get out as quickly as possible. Mindful of the many ways my aging body would protest, I took a pass. I don’t see any reason to tempt the fates, or at least my calcified arteries.

In the afternoon, we landed the Zodiacs on a small island with a penguin colony, fur seals and at least one elephant seal. I took my time, ending the visit with several minutes of contemplation as I stared at the penguins and the wall of ice across the bay, soaking it all in.

I realized that this would probably be my last time in Antarctica and I wanted to burn the view and the feeling of peace forever into my memory.

One Ocean Expedition’s Marine Mammals 11-day tour starts at $11,295. Other tours to Antarctica start at about $6,000, not including airfare to Argentina, where most tours begin. For more information and photos, see the author’s website, adventuretransformations.com.