Without tech, some ‘phone it in’ to the doc 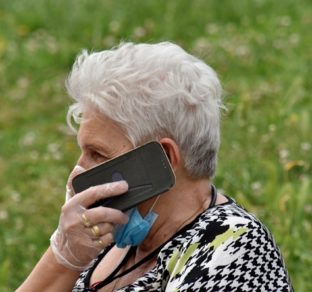 The 84-year-old diabetic and cancer survivor has no computer or cellphone. Instead, he relies on a form of communication older than himself — the telephone — to talk to doctors as he stays hunkered down in his home in Somerset, Virginia.

“We don’t even have people come out to the house because I have underlying conditions,” Egner said. “If this bug ever passed my way, I’m a dead man, and I’m going to try to be as careful as possible.”

But a portion of the U.S. population continues to rely on audio-only telephone calls for care, even as doctors’ offices begin to reopen.

Doctors say they are performing more care than ever by phone, and higher reimbursements for these appointments makes it feasible for them to do so.

But physicians also see phone calls as a last resort, and some nonprofits are trying to get more video-capable smartphones or tablets in the hands of patients who need them.

“Telephone-only visits are better than no visit,” said Egner’s physician, Dr. William Fox. “But a lot of helpful information can be gleaned from eyeballing the patient, even if it is via computer monitor.”

Smartphones, tablets or computers paired with a fast internet hookup are essential for a good video connection with a physician. Researchers and doctors say older and poorer patients often lack this technology, though it’s hard to pin down exact numbers.

The Federal Communications Commission estimates that about 21 million people do not have broadband access to the internet, but experts have said that figure is most likely an undercount.

The Pew Research Center found last year that about eight out of 10 American adults own a smartphone. But the figure drops to about five out of 10 for those over age 65.

Such statistics worry advocates who fear people may miss crucial care because they don’t have the equipment or the connectivity.

After the new coronavirus started spreading earlier this year, the federal government’s Medicare program raised the payment for audio-only visits with doctors to be on par with in-person visits. That pushed the reimbursement range from about $14 to $41 per visit up to $46 to $110.

These phone calls can last 20 or 25 minutes, said Dr. Robert McLean, a Connecticut-based internal medicine specialist and former president of American College of Physicians. While he can’t examine patients visually, he can ask how they are doing emotionally, how they are getting food, and whether they wear a mask when they go out.

Egner has started to track vitals like his temperature, blood sugar and heart rate twice a day, so he has information to give doctors over the phone. He said a recent telephone checkup with Fox went well, partially because he’s known him for at least a decade.

But he worries that a doctor can’t see him and possibly spot a health problem that Egner didn’t know about.

Some entities are trying to fill the technology gap.

CareOregon, a nonprofit insurer that runs Medicaid and Medicare coverage for about 375,000 people, has started offering smartphones to help customers connect with doctors.

A group of high school and college students has formed a nonprofit, TeleHealth Access for Seniors, to do the same thing. Yale University student Hannah Verma said she and her brother, Arjun, decided to help after hearing from their parents, both doctors, that many older patients couldn’t do video chats.

They started in March by giving some old iPhones they had at home to their parents. Then they asked friends and family for unused devices and kept expanding their push.

Their nonprofit has now gathered 775 devices to distribute to patients through doctor’s offices and clinics, including 16 Veterans Affairs hospitals. They clean the devices and then pass them along with instructions, which they offer in five languages.

They also provide pointers on finding free internet connections. One tip: Park in the doctor’s office lot to use their WiFi for a video chat.

“We’re definitely trying to do this in the long term because right now, and for the next probably year, there’s going to be a medical need for telemedicine,” Hannah Verma said.

The practice provides a deeper level of care than an audio-only call. It also makes it easier for people to keep appointments by eliminating the need to take time off work or pay for a ride to the doctor’s office.

South Dakota-based Avera Health expanded telemedicine during the pandemic at a clinic it operates on a Native American reservation in the Great Plains. Traditionally, nearly half of the clinic’s behavioral health appointments are no-shows, but that dropped to 26% once patients could check in remotely.

“I did a virtual visit with a patient of mine the other day, and when I connected with him, he was fishing on the Missouri River in between two reservations in South Dakota,” said Dr. Jason Knutson, a family medicine specialist with Avera.