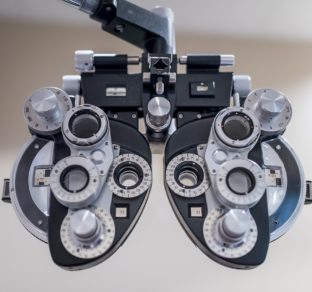 Imagine looking at the center of a clock with hands and seeing the peripheral numbers, but not the central hands. That’s the effect of severe age-related macular degeneration (AMD): loss of central vision, but retained peripheral vision.

AMD is a disease of the macula, which is the central area of the retina. The retina lines the back of the eye like wallpaper.

In developed countries, AMD is the primary cause of legal and irreversible blindness among individuals age 65 and older. Worldwide it affects 30 to 50 million people, including 3.28 million Americans.

There are two types of AMD: dry and wet. In dry AMD (the more common type, affecting 80% of patients with AMD), the macula thins, and small clumps of fat combined with protein develop under the retina (so-called “drusen”).

In wet AMD, abnormal blood vessels grow beneath the retina (termed “choroidal neovascularization,” abbreviated “CNV”). The vessels may leak blood and other fluids, causing scarring and faster loss of vision than dry AMD.

There is no cure for either type, though treatment may slow progression of the disease.

What boosts risk of AMD?

The exact cause of AMD is not known, but the following factors increase risk of developing the disease:

—Light-colored irises (maybe because they provide less protection from light)

—Factors reducing blood flow and thus oxygen delivery to the retina, which consumes oxygen at a high rate, including smoking, high blood pressure, inactivity and obesity.

—Diets low in antioxidants and green, leafy vegetables and high in fat and high-glycemic-index foods (i.e., foods that rapidly raise blood sugar, such as starches, like rice, potatoes, bread, pasta, and cereals, and sweet foods and drinks, including juices).

The good news is that you can control some of these risk factors, including diet. Your diet determines what microbes inhabit your gut, and some gut microbes may play a significant role in promoting wet AMD.

And in mice, diets high in fat, glucose or fructose have been shown to significantly reduce gut Bacteroides and increase CNV development.

The human study was too small to make generalizations, but it suggests that modulation of the human gut microbiome might moderate AMD progression. The mouse studies suggest such modulation can be accomplished through diet.

In light of this research, individuals with AMD or a family history of AMD (the primary risk factor for the disease), should try to avoid high intakes of fat, glucose and fructose, thereby promoting optimal proportions of gut bacteria and possibly reducing the likelihood of vision loss from CNV.

Dr. Alice Gasch is an ophthalmology specialist in Washington, D.C., with more than 28 years of experience.