New insights about brain from epilepsy 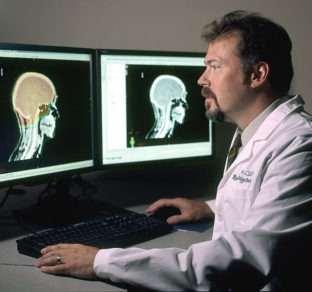 Although Genette Hofmann is still using her brain, last month she donated a bit of it to science.

Hofmann needed the surgery — her Seattle surgeon was looking deep into her brain, where he found the trigger for the epileptic seizures that had disrupted her life for 30 years.

But to get there, he teased out a bit of healthy tissue the size of a lima bean and, with her blessing, quickly sent it to some researchers, who were eager to study live brain cells.

Hofmann joined other epilepsy patients who’ve helped scientists reveal basic secrets of the brain — knowledge that could lead to new treatments for a variety of diseases.

Research volunteers such as Ruth Nall made a different kind of contribution in a California hospital room, reading sentences aloud as a network of surgically implanted sensors kept close track of how her brain worked.

Since she was going to have electrodes implanted anyway, she reasoned, why not help out?

Most people with epilepsy don’t need surgery and can control seizures with medications. But when surgery is necessary, research scientists can ask to piggyback on the procedures for a rare chance to study the brain directly.

For decades, studies of epilepsy patients have revealed secrets of the brain, like how the two halves operate differently.

The disease has a long history of revealing the importance of the brain to memory, emotion and everything we call “the self,” said Christof Koch, chief scientist at the Allen Institute in Seattle, where Hofmann’s cells were analyzed.

“Seizures have taught us more about brain and the mind, and the relationship between the two, than any other disease,” he said.

The Allen Institute is building an online atlas that makes information on hundreds of human brain cells freely available for study. The institute hopes that will provide a new avenue, beyond brain scans and animal studies, for tackling conditions such as Alzheimer’s disease and autism.

For Hofmann, 57, the decision to contribute to the study was simple, even beyond her own epilepsy. She spent years caring for a grandmother with dementia.

“This will be my chance to make a difference,” she said.

Nall, the California woman, underwent surgery, too. But before that, doctors had to discover the spot that was triggering her seizures.

To do that, surgeons often implant sensors on and within a patient’s brain to eavesdrop on its activity and catch the trigger in the act of causing a seizure.

Patients being monitored in this way may spend a week or more in a hospital room as doctors wait for seizures to happen.

“It is rare that you have the opportunity to study the brain in such a detailed way in awake people,” said Dr. Joshua Rosenow of Northwestern University.

The monitoring of Nall’s brain provided data for several papers published in the past couple years. Nall said she’d encourage others to take the same step.

“It is something you feel good about later,” she said. “Let your life be defined by the lives that you change.”

Two weeks after Hofmann’s surgery, she was optimistic. “So far, so good,” she said. “No seizures.”

Part of her brain is gone, but she doesn’t feel anything’s missing. In fact, happy memories have surfaced, “things I haven’t thought of since I was a girl.”

Contributing brain cells to science “makes me so proud and so satisfied,” she said. “It makes me feel more connected to the human race.”