Preparing to part with a dying loved one 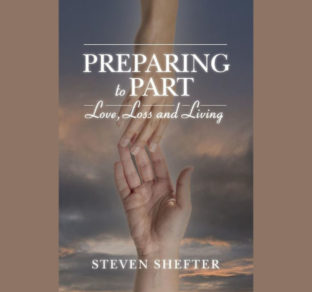 The following is an excerpt from the book Preparing to Part: Love, Loss and Living, written by Steven Shefter after his wife, Susan, died of a terminal illness. The book both describes his family’s particular experience and draws general lessons that might be helpful to others facing a similar situation.

As time was drawing to an end for Susan, she said to me, “Steve, I’m afraid I will be forgotten. I’m afraid the family won’t remember me and there will be no way for our grandchildren now, and any future ones, to know about me.”

I told her, “Susan my love, you will be spoken of every day by me and our children. And your memory will be conveyed to our family.”

But I knew she was not satisfied with that answer. Neither was I.

I wanted Susan to know her life would be remembered for generations to come. She made a 75-minute video for our children, but that wasn’t enough. So, I came up with an idea.

Throughout her illness, Susan received many cards from friends, family and coworkers expressing prayers, love and appreciation. I compiled all the notes and letters, and asked her coworkers and others to request additional notes for Susan. In two weeks, we had more than 50 letters. A week later we had 85.

On a cold winter evening, the house was quiet. Susan was tired and she was finding it harder to express emotion.

I said, “Susan, I want you to know about a project the children and I are working on. We have compiled 85 letters written to you from friends and family — letters of love, caring and devotion sharing what you mean to them, what you’ve done for them, and how your memory will carry on — that your soul will forever remain in their hearts. The book is called “What Susan Means to Me.”

I gave her the first 35 letters and told her I wanted her to see for herself [the book that] our children, grandchildren and great-grandchildren will have in their homes. In a quiet voice, she said, “This is a dream come true.” We hugged as if we never wanted to let go.

Later, when I was calm, I wrote the cover page to the book — a love note, my last to her.

Our oldest daughter jumped into frantic task mode; she got photographs, layout and spiral binding for the book done in record time.

A few weeks later, my children and I presented Susan with the final version of “What Susan Means to Me.” We were in our bedroom. Susan had a beautiful pale but weary smile and a look of contentment. She got to see the book.

Not everyone will want to compile letters and notes into a book. After all, other priorities may get in the way, or perhaps many of your friends and loved ones are already gone and thus unable to participate.

There are other ways to memorialize a loved one. The person who is ill can videotape messages to kids and grandchildren like Susan did. She even sang “Puff the Magic Dragon” for the amusement of our grandchildren.

Our son did a video interview of questions he wanted to ask his mom. The questions were about the family history and her personal history.

After Susan passed, my children and I each picked out a favorite piece of clothing and had a teddy bear made [of it] for each of us and each of the grandchildren.

We also did a clothing drive in Susan’s memory, collecting dozens of bags of clothing for a homeless shelter.

Letters can be written by the person who is ill too — letters to be opened later, perhaps on a birthday, graduation or wedding day.

If you want your ill spouse to feel good, or a surviving spouse to have something special, framing a special photo or memento — like concert tickets or a menu from a favorite restaurant — can be done by anyone who wants to help.

If your loved one was active in a cause, donating money for a plaque somewhere important in that person’s name is something that lasts a long time.

In retrospect, there are things I wish I had done, but I was too busy in the whirlwind. I wish we sat down with an iPad or iPhone and just recorded us talking to each other, for instance.

However, life gets in the way, especially when you’re in crisis mode. And some may not want to admit their time with a loved one is coming to an end. But maybe you’ll have more time than you think — doctors don’t always get it right. And recording yourselves might prove to be fun.

Find a way of creating additional memories if you can. That is the greatest gift you can give one another.

Whatever you do, don’t be hard on yourself if you don’t get to do any of these things. That’s not the point. The point is to make things easier now and going forward. These are merely suggestions.

Every relationship is different.