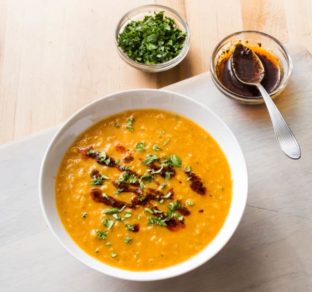 Red lentils are an ideal legume. For one thing, they’re quick to prepare, cooking up in less than 20 minutes, with no presoaking or brining required.

But the best thing about cooking red lentils is that, unlike other beans and legumes, you don’t need to worry about getting the interiors of the beans to soften before the skins rupture. With no skins to contain them, red lentils disintegrate as they cook.

In countries like Egypt and Morocco, cooks embrace this inevitability by turning their red lentils into soup. They add them to sauteed aromatics, stir in some warm spices, and then simmer the mix in broth or water. Less than half an hour later, they have a satisfying soup.

To develop our own recipe, we started by sauteing onions in butter and then used the warm mixture to bloom fragrant spices, like coriander, cumin, ginger and a pinch of cayenne, found in North African versions of this soup.

We used tomato paste and garlic to complete the base before adding the lentils, which we cooked in a mix of chicken broth and water to give the soup a full, rounded character.

After only 15 minutes of cooking, the lentils were soft enough to be pureed, but hauling out the blender or food processor seemed like overkill for such a simple soup.

Instead, we swapped the wooden spoon we’d been using for a whisk. Thirty seconds of whisking did the trick: We had a coarse puree that was homogenous from top to bottom.

Following the lead of North African cooks, we added 2 tablespoons of lemon juice to the pureed soup. The effect was like adjusting the focus on a manual camera: All the flavors were instantly more vibrant and defined.

A drizzle of spice-infused butter and a sprinkling of cilantro were all we needed to complete the transformation of commonplace ingredients into an exciting yet comforting soup.

For 25 years, confident cooks in the know have relied on America’s Test Kitchen for rigorously tested recipes developed by professional test cooks and vetted by 60,000 at-home recipe testers. See more at americastestkitchen.com/TCA.