Why women’s hair thins and what helps 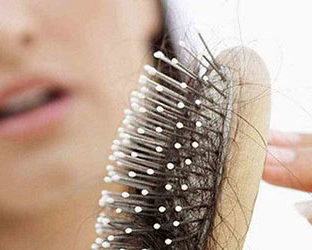 Though many people think of hair loss as a male problem, it affects at least a third of women. But unlike men, women typically experience thinning hair without going bald, and there can be a number of different underlying causes for the problem.

“Some are associated with inflammation in the body. Some are female-pattern hair loss,” said Dr. Deborah Scott, assistant professor of dermatology at Harvard Medical School and co-director of the Hair Loss Clinic at Brigham and Women’s Hospital.

But the good news is that in many cases hair loss can be stabilized with treatment, and it may be reversible. When it’s not, there are some new cosmetic approaches that can help.

The first step in dealing with thinning hair is determining what’s happening inside your body that is causing those extra strands to cling to your shoulders and your brush.

Some hair loss is normal. Everyone loses hair as part of the hair’s natural growth cycle, which occurs in three stages:

The anagen stage refers to when a hair strand is actively growing. This stage can last anywhere from two to eight years.

The catagen stage is a short transition phase that lasts up to three weeks. At this point the hair has stopped growing and is preparing to shed.

The telogen stage is the part of the hair cycle when the hair is expelled from the follicle (the structure that produces and holds the hair). After the hair sheds, the follicle then stays dormant, typically for around three months, before a new hair starts to sprout.

Normal hair loss is highly individual. Most people have a sense of how much hair is normal for them to lose. If you suddenly notice more hair than usual falling out, you’re shedding clumps of hair, or your hair seems to be visibly thinning, it may be a sign that something is amiss, said Scott.

Numerous problems can trigger female hair loss. Some are external, such as taking certain medications, frequently wearing hairstyles that pull the hair too tight, or even a stressful event such as surgery.

In other cases, thinning hair is triggered by something going on inside the body — for instance, a thyroid problem, a shift in hormones, a recent pregnancy or an inflammatory condition.

Hair loss may also be genetic. The most common genetic condition is known as female-pattern hair loss, or androgenic alopecia. Women with this condition might notice a widening of the part at the top of the head, often beginning when a woman is in her 40s or 50s.

You might experience this if you inherit certain genes from one or both parents. Hormonal shifts that occur during menopause may also spur it.

Another trigger for hair loss in women is an inflammatory condition affecting the scalp. That might be eczema, psoriasis, or a condition called frontal fibrosing alopecia, which typically causes scarring and hair loss — sometimes permanent — at the front of the scalp above the forehead.

Other common causes of hair loss include overuse of damaging hair products or tools such as dryers and other devices that heat the hair. Underlying illness, autoimmune conditions such as lupus, nutritional deficiencies, or hormonal imbalances may also cause hair to shed.

Treatment depends on the underlying cause, Scott said. Sometimes simply addressing a medical condition prompting hair loss will be enough for the hair to regrow.

In other instances, a woman might consider a medication like minoxidil (Rogaine), which helps with certain types of hair loss, or another treatment to replace or regrow lost hair.

A newer option being used to treat hair loss is platelet-rich plasma (PRP) injections. For this treatment, the doctor draws your blood, divides it into its separate components, recombines the blood fluid (plasma) with a high concentration of platelets (structures in the blood that help with clotting, among other functions), and introduces the resulting preparation back into the scalp.

“The science on this isn’t totally worked out. We still don’t completely understand the mechanism behind PRP, but growth factors contained in platelets can stimulate regeneration of hair follicles and other tissues as well,” Scott said.

In addition, low-level LED laser lights have been found to be helpful in regrowing hair in some cases. It’s likely that even more treatments will be developed in the near future.

When medical treatments fall short, women can also consider cosmetic options to make up for lost hair, such as a wig.

At the other end of the spectrum is hair transplantation, a surgical procedure that moves active follicles from the back of the scalp to areas where the hair is thinning. Once transplanted, the hair grows normally.

Hair transplantation is typically performed as an outpatient surgical procedure. In appropriate patients, it can be extremely successful, but it won’t work for everyone, Scott said.

One drawback is the expense: it can cost thousands of dollars and is not covered by insurance. The procedure also requires recovery time.

And it may not be appropriate for women who have diffuse thinning across the whole scalp. It’s more effective in treating smaller, more defined areas of balding.