A spy reveals her life in disguise 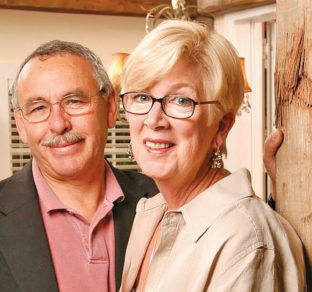 Jonna Mendez and her late husband, Antonio (Tony) Mendez, served at different times as chief of disguise at the CIA, and spent time together spying in Moscow during the Cold War. The couple wrote four books, including Argo, which became an Academy Award-winning film, and their last joint title, The Moscow Rules. This year Jonna is writing her memoir. Photo courtesy of Public Affairs
PRINT

“Don’t look back” — someone is definitely following you. “Use your gut” to choose your next move.

Are you being bugged with microphones and cameras in the walls of your office or apartment? “Assume that you are.”

As you drive to a crucial meeting with an asset, if you realize you’ll be boxed-in by other vehicles, scoot away. Then, before you duck out of the car, activate the “Jack-in-the-Box,” which will spring up from a suitcase as an inflatable body double with a facial-mask likeness of you.

That was some of the advice for U.S. government officials and CIA operatives during the Cold War years in Moscow. They are outlined — with dozens of other ways to keep the KGB at bay — in The Moscow Rules: The Secret CIA Tactics That Helped America Win the Cold War, the latest of four books written by former master CIA agents Jonna and Tony Mendez.

Among the books Jonna Mendez collaborated on with her late husband, Tony, was the best-selling Argo, which was turned into a movie that won the Academy Award for Best Picture in 2013. In the film, Ben Affleck played Tony, who had devised a real-life scheme to free six U.S. embassy officials during the Iranian hostage crisis of 1978 to 1980.

Since Tony passed away in January 2019, Jonna, now 75, appears at book events alone. She discussed The Moscow Rules in December in a virtual presentation at the Cold War Museum in Warrenton, Virginia.

The former chief of disguise at the CIA, where she spent 27 years before retiring in 1993, Mendez is currently working on a memoir from her home in Reston, Virginia.

The book will describe what it was like to be one of the few high-echelon women in the CIA at the time, as well as giving “a more personal view” of her working trips to other countries.

Being a CIA officer in Moscow “was no cakewalk,” Mendez said in a recent interview with the Beacon.

“It was the most difficult, dangerous place” for CIA agents, which was why more than 40 rules were developed for them to follow in the capital of the then-Soviet Union.

Mendez and her husband worked in Moscow on CIA business “several times” during the late 1970s, the coldest of the Cold War years, she said.

The KGB “breathed down the neck” of anyone seen going in or hanging around the U.S. embassy, she recalled. If its agents found out about a clandestine meeting between spies, the Russian “turncoat” would be “arrested and probably executed,” she added.

Jonna Mendez, who was born in Kentucky on VE Day (May 8, 1945) and went to high school and college in Wichita, Kansas, said she “married into” the CIA: She learned three days before the wedding to her first husband that he worked for the agency. They met in Frankfurt, Germany, where she worked at Chase Manhattan Bank.

She joined the agency in 1966, then spent the next several years spying in Europe, Southeast Asia and the Far East.

In Washington, she worked in the Office of Technical Service, where she was involved in “clandestine photography” — such as putting cameras in lipstick holders and fountain pens, and other James Bond-like spy technology.

“We were like ‘Mission Impossible,’” she said. “If you wanted to bug someone, if you needed counterfeit documents, if you needed a disguise…you would come in and see us.”

She devised disguises with Tony Mendez, who at the time was the agency’s chief of disguise, and who would later become her second husband. Among the disguises they produced were the Jack-in-the-Box body double and many lifelike masks.

Tony, who had connections in Hollywood, reached out to John Chambers, the make-up artist for Planet of the Apes, to help create the facial disguises.

“Tony used to say you can put the best disguise on someone who’s really nervous and scared, and it will not work,” Mendez said. “But you can hand someone else just a cane and a book, and they can become an entirely different person; they inhabit this idea.”

In 1991, Mendez visited the White House to brief then-President George H.W. Bush on recent disguises. She wore one of the masks she had created of a female colleague. Her straight blond hair was hidden by a curly black wig.

Just before she took off the mask, she told the president she was in disguise. Bush, a former CIA director, was intrigued with the new facemask technology, Mendez noted.

When asked about the future of spy technology, and whether robots will one day replace human intelligence-gatherers, she had this to say:

“At the end of the day, you have to rely on human intelligence,” Mendez said. “The one thing that will remain true is that it can’t all be technology.

“There have to be human elements to it; there have to be relationships between the case officer and a foreign asset who’s going to work for us. It has to be personal. It won’t work otherwise.”

She added: “The people working with us, especially the Russians, gave information because of [their] deeply felt anti-Soviet ideology. Others have given information mostly for money.

“But you’ve got to have that human piece in it. Robots can’t offer the future plans, intentions of our enemies. [They can’t tell us] what’s North Korea, what’s Putin, going to do next?”

Jack Downing, former CIA chief of station in Moscow, as well as the agency’s onetime deputy director for operations, called The Moscow Rules “a gripping read,” noting that the Mendezes “were two of the stars from the Office of Technical Service” and were “key to so many of the agency’s successes — and nowhere more so than in Moscow during the Cold War.”

Still, the CIA and its operations in countries where it was not invited have attracted controversy and criticism over the years. In a review of The Moscow Rules in The New York Journal of Books, Walter Clemens, professor emeritus of political science at Boston University, wrote, “The U.S.-Soviet competition profited no one except the makers of military hardware.”

In response to that criticism, Jonna Mendez replied, “The whole point of carrying out the Cold War was that it was not a shooting war. We were not putting soldiers on the field of battle to shoot and kill one another.…The Cold War destroyed the U.S.S.R.”

Mendez also helped design the International Spy Museum in Washington, D.C., and is featured in a permanent exhibit there on The Moscow Rules.

With a legacy preserved in books, museums and film, Mendez proudly recalls her three decades in the CIA.

“You realized you were a small piece in a chain of people who were able to make a real difference,” she said. “You did something that actually mattered. It was almost a calling, a form of giving back.”