A titanic, yet intimate triumph at Signature 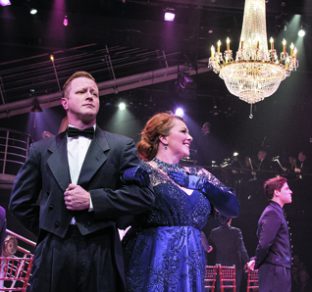 Stephen Gregory Smith and Katie McManus portray passengers on the ill-fated Titanic in Signature Theatre’s performance of the Broadway musical. The show, featuring a large cast and orchestra, is on stage through Jan. 29. Photo by Colin Hovde
PRINT

Signature Theatre has packed a big experience into a small space with their stunning production of Titanic, in performance at their 330-seat MAX Theatre through Jan. 29. The effect is to concentrate the impact of the familiar encounter with historic tragedy, to make it richer and dazzlingly vibrant.

The focus here is on the human dimension of this tale of hubris, hope and heartbreak. The technical spectacle of the original Broadway version greatly helped to make the production a rousing success. But its requirements make mounting this musical too daunting, and too expensive, for most theater companies to even consider.

Of course, they don’t have Eric Schaeffer. Signature’s founding mentor and artistic director took on the challenge of presenting a show about a sinking ship…without a ship. Forget the iceberg; there’s not even an ice cube to be seen. But you know what? You don’t even miss them.

Schaeffer and company use the relatively intimate space in the MAX to let you feel this experience, not just witness it. It’s a challenge not to become involved emotionally when you are so close to the characters, and you know what they do not.

And yes, there is enough theater magic here to give you a sense of what it’s like to be on a sinking ocean liner. And what you may not see with your own eyes, you certainly see through the eyes of the wide slice of humanity packed onto this iron behemoth.

Titanic’s thrilling, cinematic score is performed by a larger-than-usual orchestra. The sizable cast has been meticulously chosen, each member marvelously talented and seemingly perfect for each role.

Mix in evocative lighting, tight and fluid movement, and dynamic pacing that allows a mix of empathy and foreboding to co-mingle, and you have a show that grabs and holds your full attention for the entire two-hours-and-20-minute run time.

Schaeffer has configured the MAX black box as theater-in-the-round (square, actually) for the first time. You’re never more than four or five rows away from the stage.

The spell is cast as soon as the story opens and we meet the boarding passengers. I don’t know exactly where the work between choreographer Matthew Gardiner and director Schaeffer overlaps, but the graceful parade of passengers has an elegiac element that makes us see ghosts. And it’s both chilling and exhilarating.

The advantage Signature has is that we bring to the theater with us a pretty complete set of mental images. We know Titanic’s look and its feel and its sounds already. That allows our imaginations to fill in a fairly detailed picture as we experience those things vicariously through the passengers and crew members.

It is a gamble, and it really pays off. Credit Amanda Zieve’s meticulously imaginative lighting and Ryan Hickey’s lively sound design for a lot of that, too.

This is not the Leonardo DiCaprio-Kate Winslet Titanic adventure. We don’t meet those fictional characters. We do meet a mélange of people, historic and fictional, who each have their own stories in this place and time.

The long opening song-cycle is an invigorating paean to the human spirit, combining ingenuity and arrogant pride. There’s optimism and relief, for some, that a new and better life is about to begin in America.

Many in the cast are Signature and regional favorites, their faces full of humanity, their voices both powerful and sublime. There’s the great Bobby Smith, redoubtable Erin Driscoll, reliable Christopher Bloch, Sam Ludwig, powerhouse Tracy Lynn Olivera, Christopher Mueller, Stephen Gregory Smith, versatile Lawrence Redmond, and on and on.

All are flawless. I write that with full awareness that it seems a trite generalization. But it is, in fact, quite true.

One of my favorite scenes takes place in the telegraph cabin. It’s a romanticized experience with the still-new technology. The starry night on the sea is alive with voices, communicating by dits and dots, a marriage proposal carried by a spark. Nick Lehan’s gentle baritone is achingly tender in “The Proposal,” as telegraph operator Frederick Barrett.

In “Lady’s Maid,” Katie McManus, Jamie Eacker and Erin Driscoll project the unwavering certainty that life in America will be better for three Irish gals, blending hope and reality seamlessly. The trio makes it both poignant and affirming, and makes one hope we are still the country these immigrants are seeking.

Act One glides to an end on the icy cold, calm night, the mighty ship knifing through the Atlantic’s still, deep waters. The idyll is in its final moments. No moon. No wind. Tension begins to worm its way into your psyche. The strident bell. The seat-rattling rumble of a crash. Black.

The lights come up on a shaken audience, each member aware of the harrowing experience still to come in Act Two.

There’s not space enough to describe all the stirring songs and all the exceptional performances. Or to describe how it is to watch your fellow human beings try to cope with the knowledge they will soon have nothing solid left beneath them to anchor them to this world.

Moments, though, come to mind. Never has a modest lurch of a chandelier seemed so shockingly ominous. There’s the painful, yet hauntingly beautiful, scene of passengers bathed in icy blue light, moving in slow motion, their faces etched with shock and horror, frozen in time.

Titanic is a triumph.

Tickets range from $40 to $114. Rush tickets are available for $30 at the box office an hour prior to the show, subject to availability.

Tickets may be purchased online at www.signature-theatre.org, by calling Ticketmaster at 703-573-SEAT, or by visiting the Box Office during business hours, weekdays 10 a.m. to 6 p.m. and weekends from noon to 6 p.m.

The theater is accessible for people with disabilities, and it is recommended that special seating needs be mentioned when tickets are purchased. Free listening devices are available. Free parking is available in nearby public garages.