An antidote to pandemic’s stress 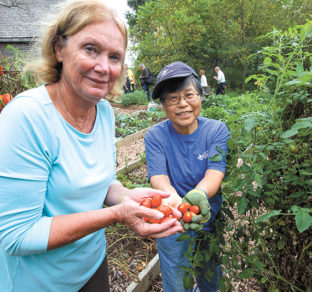 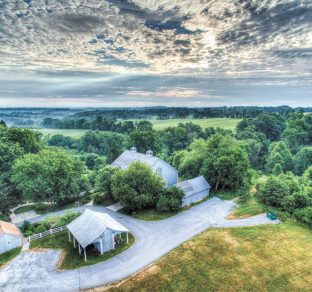 Be it a world steeped in pandemic drama or a frayed social order, the show must go on for devotees of the Howard County Conservancy at Mount Pleasant in Woodstock.

Nestled on a gentle, 232-acre rise, the land was originally owned by a family who farmed it for three centuries. They set aside the property for students and adults in order to enrich their environmental consciousness, said Meg Boyd, the conservancy’s executive director.

“They left the property for land preservation and education. They didn’t specify the Conservancy, but they did specify how they wanted it to be used.”

Global reordering notwithstanding, eager planters — many of them retired seniors — flock to the facility’s community garden to monitor the care and feeding of the tomatoes, peppers and lettuce.

Birders continue to train their binoculars, on the alert for Carolina chickadees, Golden-crowned kinglets or some of the other 142 species of birds in the county.

Meanwhile, persevering hikers vanquish any notion of kicking to the curb their love of putting one foot in front of the other.

On a recent morning, like most days during the growing season, Glenelg resident Diane Ference, 67, who grew weary of the daily commute to her job at the Navy Yard in Washington, could be found on her knees, in the midst of a forest of trellises and bags of organic humus. The scene around her was dense with wheelbarrows and watering cans.

“We get about 15, 20 new gardeners a year. We have a lot of retirees,” Ference said. “If you’re into being outdoors, it’s a commitment.” She said along with the sowing and the harvest, you must keep pace with the weeding.

Ference, who’s won medals for her heirloom cherry and Roma tomatoes, said she’s volunteered at the Conservancy for 20 years, leading school groups on hikes to nearby spots like the Davis branch of the Patapsco River, under Route 99.

Another seedsman, busy raising radishes, looked up from the soil long enough to paraphrase renowned chef Julia Child. “She said, ‘Go to the market and pick it out yourself,’” he said. Pausing to scan the well-watered beds on all sides, he added: “So, this is, like, better than that!”

Boyd said she is impressed by the growing number of gardeners, some with international roots. “We were so pleasantly surprised to see nine different nationalities. It’s a sense of community. It’s sharing ideas about growing.”

Many gardeners, who pay a yearly rental fee for space, help the conservancy maintain two 20-by-25-foot plots whose bounty is donated weekly to a local charity — the Howard County Food Bank. Gardeners also donate food from their individual plots.

“Last year, it [totaled] 5,000 pounds of produce,” Boyd said. “Last week alone, we donated 250 pounds, so we are on track to beat that this year. They’ve really stepped up to help their neighbors.”

There’s also a hand-hewn oak and chestnut English wheat barn, which the Conservancy saved from demolition in 2003.

Open to the public, some of the eight historic buildings are available to rent for events, and others are utilized in the Conservancy’s education programs or for storage.

The Conservancy has had a partnership with the Howard County School System since 2003, welcoming more than 25,000 annual visitors through its school field trips, public programs, summer camps and other educational events held throughout the year. Ann Strozyk, who teaches environmental education at county schools, maintains an office at the Conservancy.

As a result, the center is the leading provider of environmental education programs in Howard County. Students on field trips get a front-row seat into the riddle of bees, Y-shaped branches and animal footprints along the banks of the nearby Patapsco River and its tributaries.

Other groups partnering with the Conservancy include the county’s Bird Club, Master Gardeners and Beekeepers Club, all of which are based there.

“We have a very active core of volunteers who are seniors,” Boyd said. “They work as tour guides and help with setting up events and check-ins. Of course, they come with a lifetime of skills.”

During the pandemic, when the Conservancy’s administrative offices and gift shop were closed, Boyd and her staff swung into action to fill the void, presenting garden tours and other programs for all ages on Facebook Live.

Since programs at the Howard County Conservancy began streaming on Facebook, viewers have joined from places like Pennsylvania and New York. While that news excites Boyd, “nothing really replaces the in-person” connection, she said.

The Conservancy, a 501(c)(3) nonprofit, relies mostly on private donations from individuals, corporations and foundations to stay afloat. “Wine in the Garden, Beer in the Barn,” its biggest fundraising event, had to be canceled this year because of the pandemic, making donations all the more important.

Contributors receive the Conservancy newsletter and invitations to special events.

A place to find peace, safety

Visitors can sit on a bench and spend part of their day listening to the rhythmic rush of two waterfalls. Inspiring signs dot a landscape brimming with twisting brick paths.

One is inscribed with a quote from naturalist John Muir: “Everybody needs beauty as well as bread.” And from spiritualist Eckhart Tolle: “Nature can bring you to stillness. That is its gift to you.”

On a cool May day, as the lunch hour beckoned, visitors Kevin Heffernan, 67, and his wife Karen, 68, strolled back to their car after a morning spent searching for a juniper hairstreak butterfly.

“They’re hard to see,” said Kevin, packing a Canon camera and binoculars. There are 80 butterfly species in Howard County, he said, and the Conservancy is “just a great place for hiking.”

During the quarantine, the Conservancy has offered a chance to get some fresh air, exercise and serenity.

“With everything going on, the mental health benefit is huge,” Boyd said. “Not only from nature, but from all the events going on. You can see people are really just seeking some peace.”

The trails and grounds are open from dawn to dusk daily. A portable toilet with hand sanitizer is located in the parking area, as the nature center and its restrooms are currently closed to the public. Visitors are asked to follow CDC distancing guidelines while at the Conservancy.