Appreciating the Garden Club of Virginia 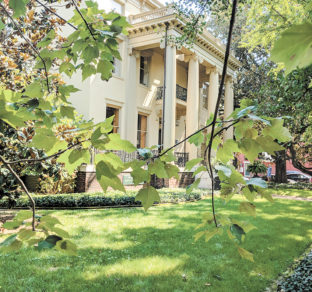 Virginia’s diverse natural geography ranges from the Atlantic Ocean to the Blue Ridge Mountains to the Piedmont in between.

One group has worked for a century to preserve those natural resources: The Garden Club of Virginia (GCV). The club was the first conservation organization in Virginia, advocating for the state parks system, monitoring state roadways cluttered by signage, and preserving many native plant habitats.

“The Garden Club of Virginia was instrumental in the founding of the Virginia State Park system in the 1920s,” noted Lynn McCashin, its executive director.

Around the turn of the last century, many American women formed garden clubs, focusing primarily on their home gardens. However, as women became franchised, they increasingly saw themselves as harbingers of political, environmental and social change.

In 1920, seven Virginia clubs joined to establish GCV. The group’s mission was to conserve Virginia’s natural beauty and to encourage others to join its preservation efforts.

Last month, the Virginia Museum of History & Culture on Arthur Ashe Boulevard recognized the importance of GCV by unveiling a new special exhibit, “A Landscape Saved: The Garden Club of Virginia at 100.”

Visually appealing, the presentation showcases the good work of GCV, from remedying the blight of billboards and mining, to restoring gardens of 40 historic houses, including Mt. Vernon. The exhibit shows the location of these preserved places, many of which are open to the public, as well as landscape plans for private locations.

Perhaps most surprising is the extent of the organization’s environmental lobbying. The garden club brought litigation to save Goshen Pass from a proposed dam and to preserve 79,000 acres of wilderness to create Shenandoah National Park, the first large national park in the East.

Over the decades, club members have educated the public on efforts to conserve our state flower and tree, the dogwood, in addition to other native plants.

Since 1947, the GCV has held an Annual Conservation Forum to tackle timely topics such as pollution, waterway protection and climate change.

In order to fund their projects, GCV established Historic Garden Week in 1929. The beloved annual tour of private gardens has been cancelled only twice: once during the first year of the United States’ involvement in World War II and again this year, due to COVID.

Running in the background of the exhibit is a promotional video of Virginia during Historic Garden Week sponsored by Standard Oil Company in the late 1950s, which publicized Virginia tourism as well as Esso gasoline.

Today, with approximately 3,400 members in 48 clubs across the state, the Garden Club is still committed to conservation. GCV ’s newest contribution to Virginia is its five-year Centennial Project, which will give out $500,000 in grants for projects that benefit Virginia’s state parks.

At the end of the exhibit, visitors are challenged to support several Virginia preservation organizations to extend the service of GCV.

The exhibit is open for in-person visits daily, now through Sunday,    Nov. 1. In consideration of social distancing, there is a prescribed path marked on the floor through the Virginia Museum of History & Culture. A brief tour of the museum takes about an hour.

As part of the national program, Museums for All, guests who present their SNAP or WIC EBT card (or show the EBT app on their phone) will receive free admission to the Virginia Museum of History & Culture.

COVID-19 guidelines require advance purchase of timed-entry tickets. Timed tickets are available every half hour starting at 10:00 a.m., with the last entry time at 4:30 p.m. To reserve tickets, go to VirginiaHistory.org/tickets.