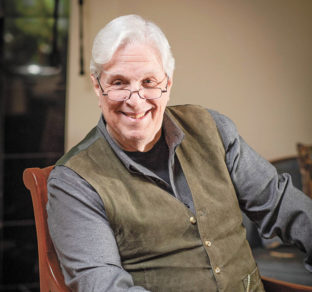 Pikesville resident Neil Noble self-published his first book of poems in 2018 and reprinted it this year. Artwork accompanies each poem in the book, titled Moods of a Lake. Photo by Stefanie Viktoria Photography
PRINT

“My poems are my autobiography in rhyme,” said Baltimore County resident Neil Noble, 73, whose first book of poetry was published recently.

Each of his poems “conveys its own story, as well as a slice of my life,” Noble said in a recent interview. As he puts it in the book’s introduction, “My relief valve has been my writing. I win a battle when I can imprison ‘the demons,’ in black and white, on paper.”

Noble has been silencing his so-called demons for the last half century, the retired construction industry employee said. During that time, he has written “five or six poems a year, between 200 and 300 in all.”

Noble said his poems were written “as a hobby, for my own pleasure,” and he did not intend them to be published.

But he has now gone public with Moods of a Lake and Other Selected Poems, a self-published book of 45 of his best poems. The book was published in 2018 and reprinted again in 2020, he said, to fulfill a promise to his father.

“I never realized that my father was collecting my poems,” he said. “Three years ago, he finally got around to asking me [to publish them]. Unfortunately, he passed a month later, at the age of 95. I never would have had the book published if my father hadn’t asked.”

Noble was born in the D.C. area but has been a Baltimore-area resident for 53 years. He now resides in Pikesville with his wife, Betty, and Bandit, their schnauzer-mix.

He describes himself as a self-made poet. Although he’s “not oblivious to other poets,” he said, he seldom, if ever, reads their works.

“I’m not one to copy other people in writing or styles,” Noble said. “I want every one of my poems to be based on my own emotions, experiences, something that happened to me, something I have seen, thought of,” without being influenced by other writers, he said.

One influence he will admit to, perhaps not in his poetry but certainly in his life, is Martin Luther King Jr., who he saw speak on the National Mall in 1965, when Noble was a teenager. That speech inspired his poem “A Better Man,” written in 1966, when Noble was 18 years old. It’s the first poem in his book.

King’s words, Noble said, also helped solidify his own beliefs and gave him impetus to work in what he called “the ongoing fight for equal civil and human rights of all oppressed people — women, people of color, American Indians, Latinos.”

Noble, a University of Baltimore graduate with a degree in psychology, wound up doing various jobs in the construction industry. (His father and grandfather were architects.)

His career included everything from hard-hat site work on concrete high-rises, to sales and advising on building materials, to mentoring women in the industry.

He also taught construction-related courses both at the Community College of Baltimore County (CCBC) and at various area lumber yards where he was employed.

However, Noble said he no longer teaches because, he found, “Young people aren’t interested in experience. They want to reinvent the wheel even though there is only one way to build it.”

Now retired, Noble enjoys playing guitar, composing songs and sculpting wood. In his free time, he designed a website to teach others how to build a deck. And, of course, he writes poems.

“Writing poetry and composing music gives me a focal point and structure upon which to concentrate my thoughts,” he said. He used to write a poem every other month, but now, he said, “My poetry and music are coming at an even quicker pace.”

Noble noted that he is working on a second book of poetry, as well as a book of short stories.

In “Moods of a Lake,” the book’s title poem, a motorist mistakes a misty veil around a lake at dawn for a crowd looking at the water. The driver hopes to feel what the crowd will feel at the soon-to-be sunrise, as well as their deepest feelings about surviving what he sees as an increasingly hostile world.

The last couplet of the poem reads, “I pass a pond beside the road, never is it seen the same twice / Dawn reveals many misty veils, by dusk memory must suffice.”

While Noble’s poems battle with those invading “demons,” there are also works in Moods of a Lake that seem triggered by other emotions and experiences — such as love lost and love found, the beauty of nature, warm memories, even puppies and mischievous cats.

In one poem entitled “Like a Flower,” for instance, Noble compares “the softness of the violet” to “your velvet skin.”

As far as his thoughts on art and the goals of his poetry, Noble put it this way in the book: “A good artist sees what others see, then creates a unique picture.

“A great artist sees what others see, then creates a unique picture of his own vision — and invites everyone else into that vision, so they can see from a different perspective.”

Moods of a Lake is available at Amazon, Barnes and Noble, and other online book sellers, as well as at neilnoble.net, where it sells for $10 a copy.