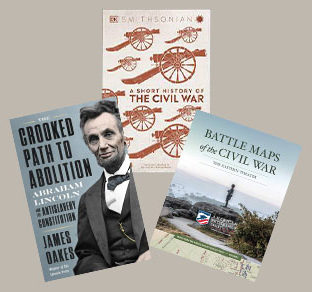 The Civil War began on April 12, 1861, 160 years ago at Fort Sumter, in the harbor of Charleston, South Carolina. One week later the first fatalities occurred in Baltimore, Maryland. We are still reeling from its causes and aftereffects these many generations hence.

These recent books focus our attention on the war and Lincoln’s fight against slavery.

With the vast archival material housed at the Smithsonian Institution at our fingertips, history buffs and neophytes will enjoy combing the breadth and depth of the Civil War through this book.

Chapters are short and pithy. They include eyewitness accounts of battles and photographs of military and civilian leaders. Learn about military ordnance deployed in that era. Read sophisticated analyses of underlying local, national and international political forces.

Editorial consultant historian James G. Barber is a retired curator at the Smithsonian National Portrait Gallery. Four consultants from the National Museum of American History and seven other historians contributed to this prodigious work of scholarship.

Adding to the appeal of this volume for local residents is an extensive listing of Civil War sites by state, including websites and short descriptions. Twenty-two are in nearby D.C., Maryland, Virginia, West Virginia and Delaware. Check online before visiting during the pandemic.

These two large-format books of maps were ingeniously prepared by Steven Stanley. Diagrams of 31 battles in the Eastern sector appear in more than 60 color maps, and 28 battles of the Western theatre are illustrated in more than 70 color maps.

The positions of troops on opposing sides and the maneuvers employed by battlefield commanders are shown in the pages of Battle Maps as an overlay on modern road maps. A one-page narrative accompanying each battle helps readers understand the conduct of the Civil War from a military perspective.

Many of the battlefields in the Eastern theatre are easily accessible to those of us residing in the greater D.C. area. Studying the maps and taking them along will surely enrich the experience.

The books are three-hole-punched at the margin and perforated, so individual maps can be removed. Purchase these books and a three-ringed binder on the American Battlefield Trust online store: shop.battlefields.org. Proceeds help support the Trust’s work to save America’s battlefields.

Civil War historian James Oakes provides a lucid account of the antislavery beliefs and actions of Abraham Lincoln as a lawyer, congressman, Whig politician, one of the founders of the Republican Party, candidate for the presidency and commander-in-chief during the Civil War.

The Crooked Path to Abolition focuses on Lincoln’s deft reading of the law while serving as president, sworn to uphold the Constitution.

Lincoln’s policy called for enlistment of free African Americans in the Union Army. He created legal obstacles to the rendition of fugitive slaves by insisting on the due process rights of the accused fugitives. (As president, he was sworn to uphold the Fugitive Slave Act of 1850.)  When states seceded, he held that he could legally free slaves under rebellion.

Lincoln believed he could not abolish slavery by fiat within the Union but could incentivize states to do so before the adoption of the 13th Amendment to the Constitution, which abolished slavery.

Many policy decisions and executive orders by Lincoln as a wartime president are not as widely remembered as the Emancipation Proclamation and passage of the 13th Amendment. The Crooked Path brings forward Lincoln’s abolitionist leanings and the political opportunities he seized to free enslaved people.