Books about World War II in the Pacific 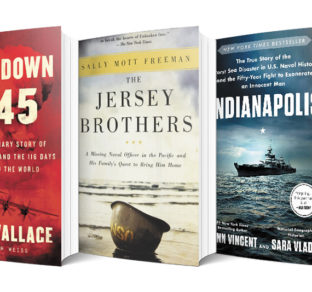 September 2 marks the 75th anniversary of the end of the Second World War. These books cover with clarity and intensity the conflict in the Pacific theater.

Countdown 1945: The Extraordinary Story of the Atomic Bomb and the 116 Days That Changed the World, by Chris Wallace and Mitch Weiss, 320 pages, Avid Reader Press/Simon & Schuster hardcover, 2020

Two events that shook the world — the death of President Franklin D. Roosevelt and the detonation of the atomic bomb over Hiroshima — occurred between April 12 and August 6, 1945.

Between these historic dates, other momentous events unfolded: Harry S. Truman’s unexpected first inauguration after his relative obscurity as vice president, the surrender of Nazi Germany, the Potsdam Conference, the electoral defeat of Winston Churchill, the culmination of the Manhattan Project with the successful testing of the atomic bomb, and the final stages of planning its deployment by a specially trained crew in a modified B-29.

Countdown 1945 delves into those historic times with an imaginative format. The narrative proceeds by date and is presented as a countdown to the fateful August 6.

Period photos of people and places add depth and dimension to this fast-moving account. An epilogue completes the life stories of crew members, military brass, atomic scientists, a Hiroshima survivor who emigrated to the United States and other participants.

Septuagenarian Chris Wallace is a resident of Washington, D.C., where he anchors the weekly Fox News Sunday; co-author investigative journalist Mitch Weiss is in his 60s.

Indianapolis: The True Story of the Worst Sea Disaster in U.S. Naval History and the Fifty-Year Fight to Exonerate an Innocent Man, by Lynn Vincent and Sara Vladic, Simon & Schuster paperback, 2019

The sinking of USS Indianapolis and the subsequent court-martial of Captain Charles McVay III provide a riveting account that highlights the issues of the pursuit of truth, justice and accountability in our armed forces.

The cruiser-destroyer was torpedoed by an enemy submarine as she was en route, without escort, to training exercises. The harrowing story of the survivors left adrift for five nights and four days in shark-infested waters without the urgent commencement of search operations called for a vigorous accounting and punishment of those responsible.

The toll of more than 800 fatalities represents the greatest loss of life at sea from a single U.S. Navy ship. The military trial took place in the Navy Yard in Washington, D.C., in November 1945.

The charges brought, the judgment rendered, the flawed reasoning, the faulty defense, the sentence meted out, as well as the use of testimony by the Japanese submarine commander Mochitsura Hashimoto added to the controversy, which took decades to resolve — beyond the lifespans of most of the participants.

Journalist and Navy veteran Lynn Vincent and documentary historian Sara Vladic tell the gripping story with maps and illustrations that make the saga easy to follow. With warmth and candor, they describe in depth the personal stories of those impacted by the tragedy, adding to the human dimension.

The Jersey Brothers: A Missing Officer in the Pacific and His Family’s Quest to Bring Him Home, by Sally Mott Freeman, 608 pages, Simon & Schuster paperback, 2018

Bethesda resident Sally Mott Freeman has lovingly reconstructed the story of her uncle Barton Cross, a POW in the Pacific during World War II. His half-brothers also served during the conflict, and Freeman brings their wartime experiences to life with descriptions of battles on land and sea, military strategy, service rivalries and ego-driven generals.

In The Jersey Brothers, Freeman deftly weaves historical details into a finely crafted tale filled with emotion, intensity and suspense.

Readers will develop a strong attachment to the individuals vividly described by this talented writer. Her mesmerizing book helps honor the memory of those who sacrificed.

It should serve to remind us of the eternal gratitude we owe the fallen, the lost and the returning veterans. It tells an engrossing story that will keep your mind’s attention and touch your heart.