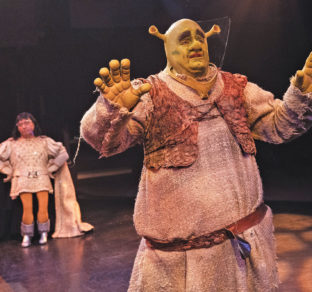 Shrek: The Musical, based on the popular 2001 movie and its sequels, is center stage at Toby’s Dinner Theatre through June 13 — with face shields for the actors and other safety precautions. Above, Russell Sunday, playing the misanthropist ogre Shrek, protects Marykate Brouillet as Princess Fiona from Jeffrey Shankle, the villain Lord Farquaad. Photo by Jeri Tidwell Photography
PRINT

Last March, as the pandemic spread locally and nationally, actors at Toby’s Dinner Theatre realized that their rehearsals for an upcoming musical were all for naught. Like other businesses, Toby’s had to shut down.

“When we were closed down last year, nobody knew how long this would last,” said Mark Minnick, executive director of Toby’s in Columbia.

“We were one week away from opening Shrek. Life changed every day. The world was in chaos every day.”

Last month, however, Toby’s Dinner Theatre picked up where it left off — with performances of Shrek: The Musical. Based on the 2001 animated film, the Broadway musical’s opening night was March 23.

It felt “amazing” to be back on stage, said Minnick, a choreographer and director at the 40-year-old theater.

“We have mounted a visually stunning and smart production of Shrek, and our customers are thrilled we are open,” he said.

Toby’s officially reopened in November 2020 with an original production, Home for the Holidays, which had eight actors.

“Live theater is vital and so important,” Minnick said. “We are open and bringing people a little escape, a chance to be able to get away with family in a safe environment.”

In reopening, Toby’s Dinner Theatre is abiding by all state and local guidelines. But they’ve increased some precautions, too.

First of all, although the state allows 50% capacity in theaters, Toby’s is only accommodating about a third of its normal audience.

Next, rather than the all-you-can-eat buffet Toby’s is known for, which is allowed under state law, Toby’s has been serving pre-plated dinners to each guest. Its traditional buffet will return later, but so far, Minnick said, “The [pre-plated] choices are wonderful. Customers are loving it.”

Parties are seated at tables that are six feet apart. After the meal ends, guests are asked to don face masks during the performance.

Although the actors don’t wear masks, they wear transparent face shields so they can convey emotions. Also, most actors have been fully vaccinated, according to Minnick. They stay six feet apart on stage, and they rehearsed the musical wearing masks.

Does all this dampen the actors’ enthusiasm? “The actors are thrilled to be back at work,” he said.

Behind the scenes, Toby’s installed new ultraviolet “germicidal lighting” to its heating, ventilation and air conditioning systems. Most UV sanitization systems can eliminate up to 99.9% of bacteria and viruses. Workers also thoroughly cleaned the building.

Even with all those precautions, Minnick understands if people don’t want to flock to theaters just yet.

“Right now, everyone might not be ready” to return to the theater, Minnick said. “For those that are, we’re open and we’re ready for you.”

After Shrek’s last performance on June 13, Toby’s will present Elf: The Musical, a Broadway musical based on the 2003 film starring Will Ferrell, Ed Asner and James Caan.

Elf was initially scheduled to run last year. When Minnick and his team sat down to plan this year’s lineup, “We said, ‘You know what? People didn’t really get to get out and celebrate last year,’” he said. “So, we decided we’re going to have Christmas in July — well, June.”

Elf will run June 18 to August 13, to be followed by Godspell from August 27 through October 31. Irving Berlin’s White Christmas: The Musical will be the holiday offering, running November 5 this year through January 9, 2022.

For people over 65, a special rate of $55.25 is available for Tuesday and Wednesday evenings and for the Wednesday matinee. To buy tickets, visit tobysdinnertheatre.com or call the box office at (410) 730-8311.