Doctor composes symphony on the side 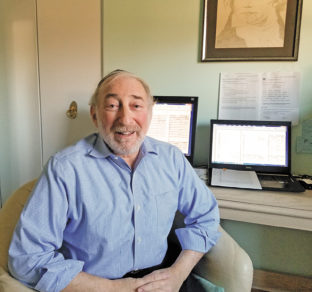 When he’s not seeing patients, Dr. Arnold Kirshenbaum, an allergist and immunologist, composes music at a computer. He is nearly finished with a symphony that will reflect the arc of the pandemic.
PRINT

The stern portrait of Ludwig van Beethoven glares down from the wall over the computer screens set up in Dr. Arnold Kirshenbaum’s guest bedroom.

Kirshenbaum was a promising musician in his school days, but he did “the responsible thing” and went to medical school after college.

But that was then. Now, at the age of 66, he is making up for lost time even as he maintains his busy allergy practice in Glenn Dale, Maryland.

In between making and taking calls about current patients, Kirshenbaum works contentedly under Beethoven’s stern gaze, writing his own chamber, orchestral and choral works using computer software designed for the purpose.

“I didn’t want it to be said that I waited to retire before getting back to music,” Kirshenbaum said. “I never really left it. I put it on the back burner, but I wanted to return to where I left off.

“I would be way behind if I waited until I retired,” he added. “There’s so much to learn! Besides, to do medicine and at the same time get the emotional and spiritual satisfaction [of composing] — to wait for that due to age? That’s counterintuitive,” he said.

Kirshenbaum grew up in Cranston, Rhode Island. His father was a musician who played in a dance band in his free time.

Kirshenbaum played flute and oboe in the school orchestra and marching band, performed with the youth philharmonic, and played keyboard in a dance band.

As he was considering colleges, and thinking about a pre-med course of study, the philharmonic conductor told him, “You’re going to have to choose between music and medicine.” There wouldn’t be time to do both well.

Kirshenbaum managed to keep up with some music in college, but medical school proved too demanding. And since he went to med school on a Navy scholarship, he had to spend four years in the service after graduating.

The Navy assigned him to the base in Quantico, Virginia, an hour’s drive from the home in Silver Spring, Maryland, where he and his wife were raising their children. But the commute turned out to be a blessing.

“While on the long drive, something [musical] would pop into my head. Today, when that happens, I can easily record it on my cell phone. But in those days, I would have to pull over and jot down some notation on sheet music I kept in my car.”

When he returned home at night, he would go to the piano and try to develop the musical thought.

As much as he didn’t want to retire before starting to compose seriously, he also knew that, while raising five children, he’d be “lucky to have 10 minutes a day” to compose.

Now that they’re all grown, he has been able for the past three years to devote nights and weekends to music.

“I spend, maybe, 10 hours a week” at it, he thinks. That includes time to study composition with Joshua Fishbein, an award-winning composer, conductor and teacher on the faculty of the Peabody Institute of Johns Hopkins University, in Baltimore.

With Fishbein, Kirshenbaum learns “college level” theory and composing. It’s serious stuff, with reading and composing assignments and even exams. He also works on developing the music themes he jotted down years ago on his commutes.

Fishbein said that “many people may have original music going on in their minds, but it takes skill to translate that to notes on paper. Arnie has made it his mission to learn to write for all the different families of instruments in the orchestra.”

Kirshenbaum said “I feel like I’ve accomplished a lot” with Fishbein. “I am writing music that has a message, feeling and emotional depth. It brings me a lot of pleasure. Without Josh, I couldn’t do this.”

The roar of the crowd

In the late 1980s, Kirshenbaum had a fellowship in allergy and immunology at the National Institutes of Health in Bethesda. His website proudly notes that he worked under the direction of Dr. Anthony Fauci.

He has continued over the years to volunteer in the same lab, continuing to assist with basic research on mast cells, which play a role in allergies and inflammation.

That work has led to 78 research publications on which he shares credit. “Research requires so much detail,” Kirshenbaum said. “You need solitude, quiet, time to think — as with composing.”

The two activities “share much in common. Including the pride of seeing something [you worked on] published or played,” he said.

This pride is at the core of what drives Kirshenbaum. “What I really want is to hear my music played,” he said, choking up, “and for people to like it.”

When he’s composing at his computer, he can hear what the music will sound like thanks to the synthesizer function of the software. But it’s a far cry from hearing it performed on real instruments.

It was three years ago that he first heard one of his orchestral pieces performed by musicians. It was his March Sousa, recorded in a studio by the Mighty Sound of Maryland Marching Band at the University of Maryland, College Park.

The next year, his Hanukah Medley was performed by the Susquehanna Symphony Orchestra before an audience at Bel Air High School as part of their “festival of lights.”

The experience was a powerful one for him. Not only did hearing his music brought to life bring him “peace of mind,” but he got a standing ovation.

For the past three years, Kirshenbaum has been working primarily on a four-movement piece for orchestra he calls Millennial Symphony. He chose the title because the work is dedicated to the younger generations “as they aspire to make their future and think big.”

He had hoped that a performance or recording of some movements by a local orchestra might be in the cards this summer, but the pandemic put a stop to that.

On the other hand, COVID-19 has given new meaning to the work, in Kirshenbaum’s eyes. He now labels the first movement, written last fall, “Pre-COVID 19,” as it is built on “themes reflecting love, strength and happiness.”

Much like the progression of the coronavirus, the next two movements turn progressively darker, as the extent of the devastation becomes more apparent.

The final movement, nearly complete, “will reflect our hopes and aspirations for the future, as we come out of the pandemic and rebuild.”

The first three movements can now be heard (played by synthesizer, not full orchestra) on Kirshenbaum’s website, thejewishcomposer.com.

Most recently, he has started collaborating with Robert Nath, a “retiring lawyer,” on an operetta. Both are writing music and lyrics for different songs “and we’re having a great time,” Kirshenbaum said.

While Kirshenbaum said the extensive effort involved in composing has brought him deep pleasure, he also admitted, “standing ovations help.”