Ever-changing artwork, powered by the sun 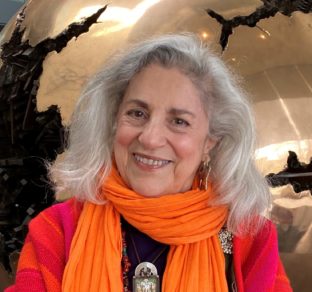 Richmond artist Janet Saad-Cook is known internationally for her "sun drawings," really art installations using objects that refract sunlight to reveal different colors of the rainbow at different times of the day and seasons of the year. Photo by Diane York
PRINT 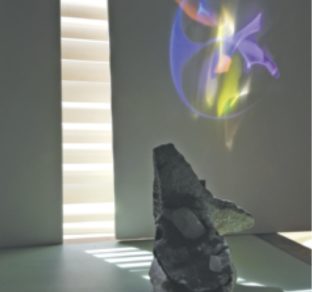 This image is from Janet Saad-Cook’s sun drawing, “The Hidden Emerald.” The art that produces the image is a private commission installed in Danbury, Connecticut. Her works will be displayed in London this April. “Together with the ancients and all future generations,” she said in a TED Talk, “we touch the sky as one human race.” Photo by Janet Saad-Cook
By Diane York Posted on March 11, 2020

A friend of mine recently sent me a TED Talks video filmed in Vienna. It displayed gorgeous light studies in vivid shades of green, blue, red and yellow — very fluid, alive and ephemeral.

I was amazed to learn they were created from sunlight and that they changed throughout the day following the movement of the earth. I was also surprised to find out that the internationally known artist who created these has lived here in Richmond since 2003.

Born in Ohio, Janet Saad-Cook, 79, spent much of her life in the Washington, D.C. area. Originally trained as a concert pianist, she took up painting and sculpture in her early 20s.

About a decade into her career, she happened to pass through a department store and was intrigued by the iridescent film in a display. As the sunlight hit it, she saw brilliant patterns of light. Excited, she rushed back to her studio and began to experiment with sunlight as an art form.

Today, nearly four decades later, Saad-Cook continues to create art in her Forest Hill home. Her now-famous sunlight-based installations have been exhibited in galleries and museums throughout the world. This April, her work will be exhibited at the Royal College of Art, Kensington Gallery, London.

There goes the sun

She first created several “Sun Drawings,” as she calls them, in the early 1980s. She soon learned that natural light is a mercurial medium, constantly changing as the earth orbits the sun.

At one point she left her studio for a month, only to find on her return, with the changing seasons, that the light through the windows no longer illuminated her art.

Saad-Cook was determined to make artworks that would continue to be visible throughout the year. She also wanted to be able to separate pure, individual colors from the spectrum of sunlight and to display them in her “drawings.”

Saad-Cook sought out scientists and engineers to help her understand how this could be achieved. Based on her work and plans, she won the position of artist-in-residence at the Physics Department of Catholic University in Washington, D.C.

She spent a year in that position and then studied at its Glass Research Center. There, she learned the sciences of optics and metallurgy.

She explored ways to bend and coat glass, and learned how to change refraction with various metals and coatings to affect light passing through.

Following the sun out West

Hoping to learn more about the sun and paths of the planets, which was critical to developing sun drawings that would be beautiful throughout the year, she contacted the American Astronomical Society, where she met astronomer Peter Boyce.

Boyce visited her studio and suggested she travel to some sites in the American Southwest where Native American cultures marked the Solstices by tracking sunlight.

And so began her study of archaeoastronomy — the interdisciplinary study of how ancient cultures “have understood the phenomena in the sky…and what role the sky played in their civilizations,” such as for marking time and the changing seasons, Saad-Cook said.

With Boyce’s encouragement, she studied the cultures at sun sites such as Chaco Canyon, New Mexico; Chimney Rock Colorado; Hovenweep Castle in Utah and the pyramids of Mexico, including Teotihuacan near Mexico City.

She has become so knowledgeable on the topic of the sun and how cultures viewed it in the past that she has been asked to deliver papers on the subject to the General Assembly of the International Astronomers Union at Johns Hopkins University and astronomers at the Massachusetts Institute of Technology’s Haystack Observatory.

Saad-Cook now believes her sun drawings, which she patented in 1989, connect human culture from the most primitive times to the present. As she puts it, “My work occurs at the intersection of time, space and light.”

Her art is now known throughout the world. In addition to the London exhibit in April, her works have been exhibited in the Gladbeck Museum in Germany as well as galleries in Italy, France and Monaco.

Her European exhibitions brought Saad-Cook to the attention of TED Talks Vienna, which contacted her and asked her to come to that city and deliver a presentation on her work.

Here in the United States, one of her most impressive installations is located in the Photonics Center at Boston University, where her 20-by-10-foot sun drawing, titled “Athanor,” has been situated on the curved atrium wall since 1997.

Viewers are mesmerized as the sunlight moves across its mirrored metals and coated glass. As the day progresses, the light breaks into different, pure colors and ghost-like images that “walk” across the wall. Workers there so love this magical artwork that they have volunteered to pay to upgrade the heliostat, the device that operates the sun drawing, so it can be visible for more hours of the day.

Saad-Cook has also conducted numerous collaborative projects with scientists, architects and engineers, along with independent research in the field of archaeoastronomy.

Now she lectures extensively in the U.S. and abroad, and has presented papers about her work at scientific institutions such as The Royal Institution of Great Britain, the National Radio Astronomy Observatory, the Santa Fe Institute, and the International Astronomical Union, among others.

It is a credit to the complexity of her work that so many science-related institutions include her sun drawings as permanent exhibits in their facilities. Some of these include the National Radio Astronomy Observatory in Socorro, New Mexico, and the American Association for the Advancement of Science and the Smithsonian Institution, both in Washington D.C.

As a breakthrough woman in the field of art, Saad-Cook is included in the most recent edition of Originals: American Women Artists by Eleanor Munro. Her works, Munro writes, “link the three orders of nature: humanity, earth and sun into a techno-esthetic continuum to outlast any single day or lifetime.”

One of Saad-Cook’s dreams is a building that would house multiple sun drawings so that the moving pictures of sunlight could be seen year-round by visitors. She obtained approval for this project from the National Science Foundation and located a site in New Mexico. A Sun Foundation was begun, but funding has never reached the necessary goal.

She also hopes to create a trail of sun installations around the earth that would track the sun’s light, creating a global chain of images following the movement of the earth around the sun.

“Despite our fractured world, we connect with each other in ways that are beyond all barriers of time or space or race or spiritual beliefs,” she said in her TED Talk in December 2019. “We touch the sky as one human race.”

As Munro states, Saad-Cook’s art starts at the beginning of time, transcends the present, and can continue into the future for as long as the sun shines. It is eternal and classic.