Guests can stay inside an Edward Hopper painting 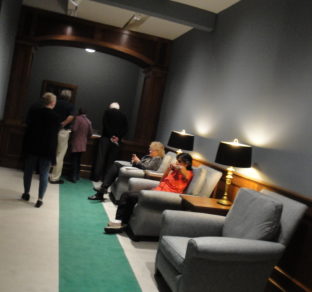 When Alex Nyerges, director and CEO of the Virginia Museum of Fine Arts, heard curator Leo Mazow’s idea that the museum should build an actual hotel room to mimic one of Edward Hopper’s paintings he said, “I thought he was crazy!”

But Mazow’s idea evolved and was accepted — and now, Nyerges said, “I’m so glad we did it.”

In an innovative move, the museum allows visitors into Hopper’s world by recreating, in three dimensional models, several of the scenes he painted.

The museum has created a real motel room mimicking the painting “Western Motel.”

In the painting, a lone woman, seated on the edge of a bed, looks toward the viewer. The colors around her are muted. The window behind her casts harsh sunlight across the room. Behind her, a bleak, hilly landscape extends beyond our viewpoint. We can see part of a vintage automobile and the open road beyond it.

The mood is transient in “Western Motel.” There is no comfort or hominess here; the room is meant as temporary, basic shelter.

In the museum re-creation, the room contains a bed with the identical red bedspread and chair. The room’s window shows the rolling hills and beckoning road. Golden light establishes sharp angles in the room. Only the woman is not present, perhaps having moved on to other adventures.

In a sense, guests will be occupying the place of Hopper’s wife, Josephine, his travel companion and model. Jo was an artist in her own right and was uniquely involved in Hopper’s work. She was his model in “Western Motel,” “Hotel Room,” “Morning in a City” and “Hotel Lobby” as well as many other works.

The museum offered the chance to “rent” this make-believe motel room for a night for $150 to $500, depending on which special package guests chose. “The Hopper Hotel Experience” includes dinner in the museum’s premier restaurant, Amuse, a guided tour led by a curator, an exhibition catalog and brunch and miniature golf at the Hotel Greene. Check-in is permitted after museum hours at 9 p.m. and check-out is at 8 a.m.

The experience is sold out through February, though, and some people with reservations may have to lower their expectations. Guest Margot Boyer-Dry wrote in The New York Times, “Ultimately, it reminded me of every other hotel room I’ve ever stayed in.”

Step into a Hopper lobby

Hopper’s renditions of hotels, boarding houses and diners are minimalistic, giving the viewer the feeling he has intruded upon a private, intimate and yet lonely scene.

The VMFA’s second three-dimensional replication is that of the 1943 painting “Hotel Lobby.”

In the work, three people sit in a hotel lounge near a mahogany concierge desk. They are each enveloped in their own world, waiting. While they may be together or are complete strangers, they convey isolation.

An actual lounge area, which visitors can sit in, has been recreated in the museum with furnishings that match those in “Hotel Lobby.” From the gray armchairs to the white and green rug, the painting’s details are captured in three dimensions.

The VMFA’s Hopper exhibition presents America in the 1920s, when he was making commercial art for travel and hospitality industries, through the 1950s, during his development as a fine artist.

While Hopper’s early commercial works celebrated the joy of travel, his later works become more about the alienation of people on the road. What better way to experience that ethos than a night in an empty museum?

“Edward Hopper and the American Hotel” is on exhibition at the VMFA until Feb. 23, 2020. Rooms are sold out through February 2020. For more information, visit vmfa.museum/exhibitions.