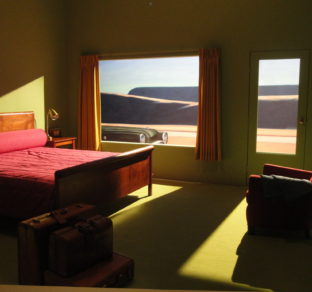 The Virginia Museum of Fine Arts recreated the motel room depicted in Edward Hopper's 1957 painting "Western Motel" to give visitors a three-dimensional feel for his work. In an innovative move, the museum even rented out the room for a limited number of nights. Photo by Diane York
PRINT 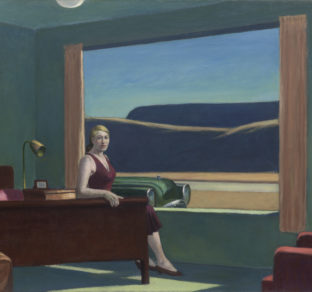 The acclaimed painter Edward Hopper first visited the state of Virginia in 1939, when the Virginia Museum of Fine Arts (VMFA) invited him to chair the jury for the museum’s first biennial exhibition. Hopper returned in 1953 as a juror for that year’s biennial exhibition, too.

On the latter visit, the VMFA purchased Hopper’s 1935 painting “House at Dusk” for its permanent collection. That painting, along with more than 60 others, is now on view in its current exhibition, “Edward Hopper and the American Hotel,” open through February 23, 2020.

Curated by Leo G. Mazow, the curator and head of VMFA’s department of American art, the exhibition includes paintings from world-class art museums and private lenders. It presents America in the 1920s, when Hopper was making commercial art for travel and hospitality industries, through the 1950s, during his development as a fine artist.

While Hopper’s early commercial works celebrated the joy of travel, his later works become more about the alienation of people on the road.

From prosaic to poetic

“Hopper took the less heroic and monumentalized it,” VMFA director Alex Nyerges said at the exhibition’s media preview. “He saw value in the vernacular.”

As travelers, we are all familiar with the hours spent watchfully waiting by windows, in hotel rooms and lobbies, or at train stations, restaurants and diners.

Beyond those dull, introspective moments, though, travel has what Mazow calls “the promise and complications of American mobility in general, as well as the slippage between prosaic and poetic themes.”

Hopper’s renditions of hotels, boarding houses and diners are minimalistic, giving viewers the feeling they are intruding upon private, intimate and yet lonely scenes.

Take, for instance, the superficially ordinary scenes of a woman reading in her lingerie in “Hotel Room” (1931) or sitting fully attired, ready to go, by a hotel window with a car waiting outside (“Western Motel,” 1957); a comfortable parlor with a piano evoking the silence and disengagement of urban hotels (“Room in New York,” 1932); a man sitting with cheerless expression next to an open book on a hotel bed with a woman asleep behind him (“Excursion into Philosophy,” 1959); or a couple in a dimly lit room, separately occupied by his newspaper reading and her playing the piano (“Hotel by a Railroad,” 1952).

Hopper’s work in these travel-related paintings and sketches is a reflection of American tourism as both impersonal and intimate. After all, a traveler’s transient home on the road sometimes includes moments of connection or memories.

Hopper’s paintings will resonate with anyone who has been disenchanted by wanderlust.

It’s interesting to note that by the 1930s the American hotel had itself become a work of art — with intricate wallpaper, carpets, murals, French doors, and, as shown in “Hotel Lobby” (1945), mahogany wainscoting and Ionic fluted columns of the lobby desk.

In an innovative move, the museum brings visitors into Hopper’s hotel world by recreating, in three dimensional models, several of the scenes he painted.

The museum has even created a “motel room” mimicking the painting “Western Motel,” and offering overnight stays for guests. Within a day of going on sale, most of the 140 overnight packages had been sold.

In a sense, guests will be occupying the place of Hopper’s wife, Josephine, his travel companion and model. Jo was an artist in her own right and was uniquely involved in Hopper’s work. She was his model for “Western Motel,” “Hotel Room,” “Morning in a City” and “Hotel Lobby” as well as many other works.

Ellen Chapman, a Richmond resident who spent a night in the guest room, told The New York Times, “I’ve always had that childhood fantasy of spending the night in a museum. The remarkable part for me was waking up, drinking my coffee and looking at this amazing exhibit right next to me.”

Just as art critics dismissed Norman Rockwell during his lifetime (and for decades thereafter) for being a commercial artist and illustrator, Hopper was often passed over as a painter of fine art because of his past as an illustrator.

This exhibit, which includes his covers from Travel Management and Tavern Tips magazines, proves not only that art can have commercial purposes, but that commercial drawings can themselves constitute art.