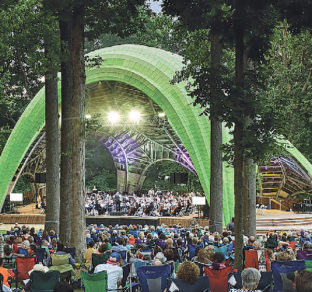 If you live in Howard County, there’s no need to drive to Baltimore or Washington, D.C. to hear top-quality classical music or see a play that ran on Broadway. For more than four decades, Howard County has been building a robust arts scene that rivals big-city venues.

One mark of its progress will be the county’s new cultural arts center, whose construction is set to begin in the spring. It will combine performance space, a children’s theater, dance classes and art studios, as well as the new home of Toby’s Dinner Theatre.

“There will be artists doing all kinds of artwork. Hopefully, it’ll be buzzing with activity,” said Toby Orenstein, owner of the dinner theatre. “It’s a dream which we hope to see come true.”

Toby’s is celebrating its 40th anniversary this year, as are several other Columbia-based musical groups.

Frances Dawson, who founded the choral group Columbia Pro Cantare in 1977, urges Howard County residents to take time out to hear a concert or see a play.

“Music is something that really helps people in periods of strife,” Dawson said. “There’s something in it that reaches beyond anything else that can hopefully open your mind.”

Here are some of Howard County’s most popular art venues:

Founded in 1972, the Candlelight Concert Society performs chamber music, most often in the Smith Center at the Horowitz Center (see separate listing below). This season’s lineup includes international stars, including a Chinese accordionist, British and Uzbek pianists and a German a cappella group. In May, “Hayden to Hollywood” will feature popular music by John Williams.

“Our audience doesn’t have to fight the traffic or pay parking garage fees; It’s all basically in their back yard,” said Irina Kaplan Lande, Artistic Director of the Candlelight Concert Society. “It’s very exciting to have this incredible quality in Columbia and Howard County.”

There’s free parking and a free shuttle to the venue, which has “generally accessible” seating, according to its website. Much Ado About Nothing is scheduled for next July.

Among the unique aspects of a Columbia Orchestra concert are the free pre-concert lectures that delve into the composers and their back stories. These sessions are a great way to get more out of the performances.

This season’s concert highlights go beyond Mozart and Gershwin to include the family-friendly Symphonic Pops concert in April — songs from South Pacific, The Sound of Music, E.T. and other classic films. Wheelchair accessible.

The choral group Columbia Pro Cantare is celebrating 42 years in Howard County. Its audiences are “very sophisticated,” Dawson said, and “quality is one of the things they mention” in surveys. This season, the group will perform Mozart’s Requiem and Handel’s Messiah. Senior tickets are $20.

Led Zeppelin, Jimi Hendrix, Janis Joplin, the Grateful Dead, The Who, Santana and Paul Simon have graced this famous outdoor stage in Columbia. Designed by architect Frank Gehry in 1967, the outdoor pavilion collapsed in January 2018 during a $55 million renovation but has been rebuilt in the same style.

This year the amphitheater added not only corporate sky boxes but elevated, standing-room-only greenspace on both sides of the pavilion, dubbed the “sky lawn.” The green Chrysalis amphitheater opened in 2017.

Merriweather closes for the season every September but will be back in the spring with a full lineup of every type of music under the sun.

For 25 years, Howard Community College’s Rep Stage has taken on edgy, thought-provoking plays such as this season’s E2, a remake of Christopher Marlowe’s play Edward II.

“All four productions in the season also examine power in its many forms, whether it is the power of positive thinking, the abuse of power or the power of pure entertainment,” Rep Stage Producing Artistic Director Joseph W. Ritsch said in a statement.

Toby’s Dinner Theatre productions have won many Helen Hayes Awards. This season, prepare to laugh at A Christmas Story, Kinky Boots, Shrekand Spamalot, which will feature Broadway costumes, according to Orenstein.

Since the theater’s first show was Godspell, she said, they will perform that play again next year. “So there’s new and there’s old,” she said.

Toby’s Dinner Theatre has ample free parking and is open on holidays such as Thanksgiving and Easter. Orenstein also founded the Columbia Center for Theatrical Arts, a theater school, in 1972, which has daytime classes and performances throughout the year.

Established 35 years ago as the Burtonsville Players, Inc., since 2003 the Laurel Mill Playhouse has been located in a quaint 100-year-old house on Main Street in Laurel. Thanks to the intimate setting, the audience is able to meet the actors. Free parking is available in a nearby city lot.

The community theater’s next season includes a play about the Salem witch trials and the classic Miracle on 34th Street.