Kojo Nnamdi takes a step back 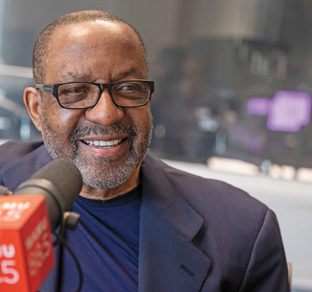 The final episode of “The Kojo Nnamdi Show” aired in April, but Kojo Nnamdi will still host “The Politics Hour” on WAMU on Fridays. During what he calls his “semi-retirement,” the longtime D.C. resident plans to write a memoir and travel. Photo by Tyrone Turner/WAMU
PRINT

He may be semi-retired, but radio personality Kojo Nnamdi is still on the go — hosting “The Politics Hour” Fridays on Washington’s NPR station WAMU, getting set to write a memoir of his 76 years, and planning trips to South Africa, India, Nepal, the Himalayas, and other not-yet-visited parts of the world.

“You could say that I’m semi-retired, since I no longer have my daily show. But I’ll still be on WAMU weekly, talking politics, and will be hosting a series of live events on the station,” Nnamdi said in a recent interview with the Beacon. “And I now have more time to write and to travel.”

Nnamdi said it was his decision to end his daily show, which was last broadcast on April 1, after 23 years. Loyal listeners and media critics agree that the program offered intelligent, reasonable, rational discussions of what was going on in the D.C. region — politically, culturally and in other ways — while highlighting how people live, prosper and sometimes struggle to survive in the area.

From South America to D.C.

The well-known D.C. journalist-commentator known simply as “Kojo” was born Rex Orville Montagne Paul in what was once called British Guiana, now the country of Guyana. He spent the first 22 years of his life in that South American country on the Caribbean coast.

“Radio is something that has been very specific for me. Growing up in Guyana, I only had the radio. I didn’t see TV until I came to the States.

“As a kid, when I came home from school for lunch, my mother was listening to her stories on the radio. There was the local news, and at 4:30 in the afternoon came the BBC broadcast. It was radio that set the agenda [for the household].”

Radio had an impact on him for its “unique ability to connect with people,” he said. “Most people listen to the radio by themselves, at home or driving in their cars. A relationship, intensely personal, develops between the listener and the broadcaster.”

Nnamdi changed his name in 1971, taking his new surname from Nigeria’s first president, Nnamdi Azikiwe, and replacing his first name with “Kojo” — a name from Ghana given to boys born on a Monday. The name change, he has noted, “was reflective of a change in me.”

(His birthplace also underwent a name change in 1966, when it shook off British colonial rule and became the independent nation of Guyana.)

Nnamdi has lived in the United States for 54 years, minus a short stay in Montreal as a student at McGill University.

“I lived in Brooklyn, [where] I became a member of the Black Panthers for a few months. I came to Washington in 1969. I’m a U.S. citizen, proud of my Caribbean roots, and I identify myself as an African-American,” he said.

Among other D.C. gigs and experiences, Nnamdi was a student in 1969 at Federal City College; worked at The Drum and Spear, a D.C. bookstore that attracted Black activists; was news director of Howard University’s WHUR-FM station; and then, from 1985 to 2011, hosted Howard’s public affairs TV program, Evening Exchange.

In 1998, he replaced Derek McGinty as the WAMU host of Public Interest, a two-hour show, with one hour distributed nationally that covered national and international topics. In 2002, that became The Kojo Nnamdi Show, which focused exclusively on local matters.

The show has been praised through the years by listeners, other broadcasters and media professionals.

“Kojo Nnamdi is one of the finest broadcasters I’ve ever known,” said Diane Rehm, who now hosts the WAMU/NPR podcast On My Mind.

“Long before he came to WAMU, he invited me onto his television program at Howard University and, in turn, I had him on The Diane Rehm Show [on WAMU]. I saw how diligent his preparation was, both on his own program and when he appeared on mine,” she said.

“I also learned what a fine listener he is, paying close attention to what his guests were saying rather than concentrating on what he might say next.

“As a native Washingtonian, I can tell you that I’ve learned more from him about our region than from any other source. He is literally a font of knowledge,” Rehm said.

Silvio Waisbord, director of George Washington University’s School of Media and Public Affairs, said: “Kojo has done a terrific job over the years, bringing reason, dialogue and diversity to important conversations about the D.C.-Maryland-Virginia area and national issues.

“He tapped into experts and community voices to understand a range of public issues, with curiosity and openness. His gentle yet incisive questions to policymakers stand as a model of journalistic interviewing.”

So, as a member of the talk-radio generation, does Nnamdi consider himself a journalist, a commentator or an opinion maker?

“I suppose you could say all of the above,” he said. “One of the things we were taught in journalism was to leave your opinions at the door. I still think that’s true. But you can’t expect an observer to leave his or her humanity at the door.”

During his career, one of Nnamdi’s principal on-air goals has been to try to bridge the racial gap in D.C. neighborhoods.

He has often spotlighted race in his programs: In a recent discussion, in the wake of the George Floyd killing in Minneapolis, one of his segments focused on how to improve policing in Black communities in the D.C. area.

Have race relations changed in the 52 years he has been living in the nation’s capital?

“I think that fundamentally they have not,” Nnamdi replied. “But I do see significant change on the horizon. On one hand, the Black Lives Matter movement is attracting White residents.”

More changes, he said, will come from the gentrification movement, which has attracted Whites to originally Black neighborhoods. White residents, he said, have been “reaching out” to new Black friends, and he’s hopeful.

“Efforts are being made to improve housing, education and the quality of life in challenged Black communities. Both races are trying to respect one another in these communities. This has never happened before.”

And, as Nnamdi has been saying for years on the air, all of the D.C. region and its people will undergo better living when Washington becomes a state.

“If D.C. were a state, it could move to pass laws that could substantially increase economic activity here,” among other things, he said.

He allows, however, that statehood for the district’s 700,000 American citizens will be difficult to come by in today’s political situation. For D.C. residents to get statehood, he said, the Senate likely would have to get rid of the filibuster.

When Nnamdi writes his memoir, which he said he hopes to get around to fairly soon, what could he say he has learned while growing up that could be passed on to young Black readers?

“I would tell the kid that you can’t let your circumstances define you, even if you come from another country. If you are from D.C., you cannot let your neighborhood define you,” Nnamdi said. “It cannot change your right to shape your own image and where you live.”