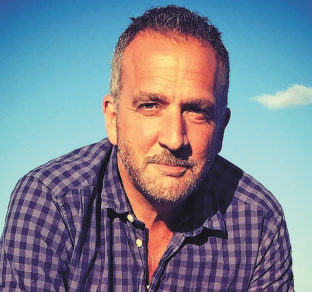 Born and raised in the D.C. area, George Pelecanos is author of more than 20 crime novels, most set in the local area. He has also worked as a writer, editor and producer of television series such as “The Wire,” and is now working on a new HBO series. Although he writes about crime, Pelecanos said, “I’m interested in…the social conditions and inequalities that push people to make choices that others, frankly, never have to consider.” Photo by Rosa Pelecanos courtesy of Little, Brown and Co.
PRINT

George Pelecanos is the award-winning writer of 21 novels set in and around Washington, D.C. — all researched, he said, “in the street rather than the library.”

Pelecanos, 63, prides himself on prowling mean inner-city streets to get the most accurate descriptions for his crime novels. Lately, though, the resident of Silver Spring, Maryland, has been relegated to the woods of Rock Creek Park.

“I drive my car to the park and hike two or three miles, then I’m home, pitching and having meetings over the phone,” Pelecanos told the Beacon in a recent interview.

The bestselling novelist has become a homebody, like the rest of us, because of the COVID-19 pandemic.

“It’s such a tremendous event in the nation’s history,” he said. “We don’t even know how it is going to play out. This will certainly impact the people I write about. The most negative effects will be felt by the working class, the people at the bottom.”

Pelecanos is also a writer and producer, along with David Simon, of several highly lauded TV series. Among the most notable was “The Wire,” which was set and filmed in Baltimore. His other TV work with Simon includes “Treme,” shot in New Orleans, and “The Deuce,” set on the seamy side of New York.

Readers will find detectives, cops, crooks and law-abiding citizens of the D.C. area interacting in dramatic and exciting books such as The Night Gardener, Drama City, Hard Revolution, Soul Circus, Hell to Pay, Right as Rain, The Sweet Forever and King Suckerman.

You won’t find in Pelecanos’ novels the wheeling and dealing of national politicos who make D.C. their temporary home. But you will certainly read about the effects of their decisions on the working- and middle-class denizens of the city.

As a result, the label of crime fiction doesn’t quite fit his work, he said, which he classifies as “social realism” rather than hardboiled fiction.

“I am a crime writer, but crime is the way I get into what I’m most interested in, which are social issues,” Pelecanos said.

Literary critics, as well as higher learning institutes, are now looking more seriously at novelists, like Pelecanos, who write about the crime scene.

Students at U.S. universities study and write thesis papers on such 20th-century crime writers as Dashiell Hammett and Raymond Chandler. A master’s degree in “crime and thriller writing” is currently offered at the prestigious University of Cambridge.

“I think of myself as a novelist first and foremost,” Pelecanos said. “I see myself as more of a spiritual descendant of [John] Steinbeck than of Agatha Christie.”

Shaped by childhood in D.C.

Pelecanos, who was born and raised in the D.C. area, said he took a crime fiction class in his senior year at the University of Maryland. The class included the works of Hammett, Chandler, John D. MacDonald, Ross MacDonald, Mickey Spillane, John le Carré and Elmore Leonard, Pelecanos’ all-time favorite crime novelist.

His interest in the lives of everyday people in and around D.C. began when he worked as a delivery boy at his Greek-born father’s diner in downtown D.C.: the Jefferson Coffee Shop at 19th Street and Jefferson Place NW.

“I was 11 years old in 1968, two months after the riots. I took a bus every day down Georgia Avenue to my father’s lunch counter,” he recalled. “The D.C. transit passed through parts of town that had been completely destroyed. Some of the people on the bus had lost entire neighborhoods.

“But clearly they had won something, too. I could see it in their posture, style of dress and attitude. It registered with me on a gut [level] rather than an intellectual level.

“Since then, I have always wanted to find out what happened. Writing a novel set during the riots (Hard Revolution) offered me the opportunity. Know the past, and soon the present starts to make sense, right?”

When Pelecanos started writing novels, he felt a duty to create characters who represented the people he observed when he was a child.

“I didn’t feel that Washington, D.C., had been fully represented in literature — the real, living, working-class side of the city,” he said.

“The cliché is that Washington is a transient town of people who blow in and out every four years with the new administration. But the reality is that people have lived in Washington for generations, and their lives are worth examining.”

At the moment, Pelecanos is involved in writing and producing a mini-series for HBO about a squad of corrupt police in Baltimore. His most recent novel, The Man Who Came Uptown, was published in 2018.

Whether he’s writing a book or screenplay, though, Pelecanos said his work has the same goal.

“I’m attempting to give humanity and dignity to the kinds of people who are often ignored or misrepresented in American literature.

“I’m interested in the societal aspect of crime, the social conditions and inequalities that push people to make choices that others, frankly, never have to consider,” Pelecanos said.

“Crime is the narrative engine in my books, but really I’m interested in the people and their lives.