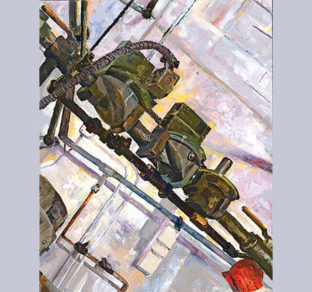 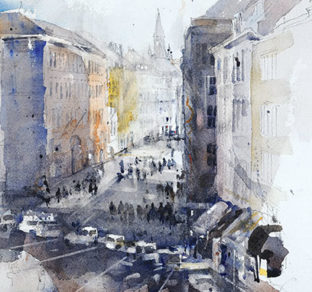 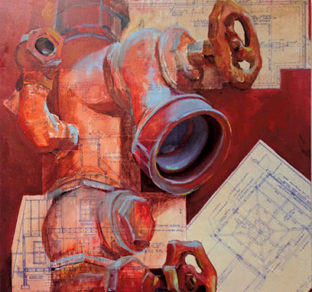 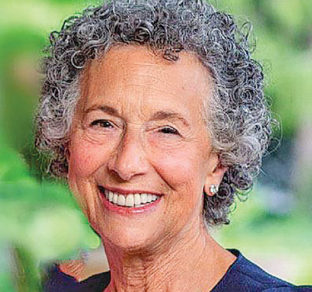 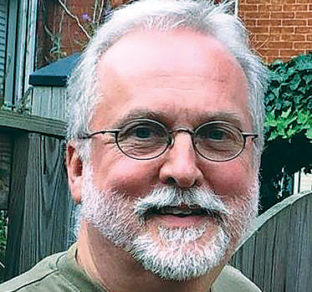 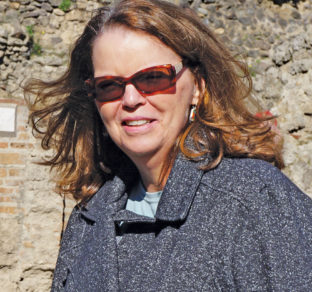 The painting category of the Celebration of the Arts has the potential to elicit dramatic, unusual works, and this year was no exception. Rather than traditional landscapes or still lifes, two of the winning paintings depict industrial scenes, and the third is a busy European cityscape.

At her 75th birthday celebration, Ellen Yahuda saw a photo of herself at age nine and realized she still has a lot in common with her childhood self.

“When I was younger, my parents sent me to ballet classes and art classes,” she said. Today, she’s still dancing and painting.

Yahuda grew up in Philadelphia and lived in Cambridge, England, for 35 years, working as a criminal attorney. When she returned to the United States in 2003, she began taking art classes at American University’s Osher Learning Institute.

She started with a collage class, but found “It wasn’t enough,” she said. She went on to study with Rockville teacher Glen Kessler, completing his three-year Master Artist Program in 2019, she said, “and I never stopped.”

The painting’s gritty atmosphere is a nod to her work as a criminal lawyer. “The factory machinery really speaks to the seediness and down-to-earth [life]. I see the beauty in it, I see the shininess next to the rust and the abstract design on the ceiling.”

Now, in the middle of a pandemic, Yahuda is undergoing cancer treatment. Yet she still paints three or four hours every day. When she’s not painting, she is cooking, she said.

Zoom makes it easier to keep up with art classes at home, Yahuda said, and she refuses to slow down. “I have better things to do than think about cancer.”

Ray Goodrow worked as a commercial architect in D.C. for decades. After he retired five years ago, he picked up a paintbrush for the first time since he was a child.

First, he took several art classes at the Torpedo Factory in Alexandra, Virginia. “That’s a good way to get involved in the art scene in our area,” Goodrow said. “The more you do it, the better you get.”

Goodrow has had a successful year. One of his cityscapes won a “best in show” award at a Torpedo Factory competition in June. He has sold 15 paintings in 2020.

He’s also president of the McLean Art Society, a local group that meets once a month to watch artist demonstrations.

With a background in historic preservation, Goodrow started out painting buildings and cityscapes. Lately, the artist has moved on to living subjects.

“Now, I’ve really gotten to where I like doing people, different scenes with people. I also do cows,” he said, noting that he grew up in Texas. “I don’t paint just one thing.”

Goodrow’s winning watercolor, “Munich,” is based on a photograph he took on a trip to that city more than 20 years ago.

“I delve back into my photo archive that goes way back because now I have time to paint,” Goodrow said. “Sometimes the buildings are demolished. Sometimes the scenes don’t exist anymore, so it’s kind of fun.”

When Gillian Collins goes on vacation, she tends to snap photos not of prominent landmarks but of pipes, antique fixtures or valves. Her painting “Italian Valve” was inspired by a photograph she took in Florence, Italy.

“I like those geometric patterns. It’s a functioning thing, and I’m making beauty out of it. I’m divorcing the function from the form.”

Born in England, Collins, 64, has been painting for 35 years, although not full-time. In her day job, she does the accounting for the plumbing company and HVAC company she co-owns.

In December 2019, she received her Master of Fine Arts from Towson State University. It was there that she found her “voice” as a painter and her industrial subject matter.

Collins started as a plein air painter, focusing on outdoor landscapes, but became bored, she said. Her professors encouraged her to delve deeper.

“My professors kept telling me I needed to have a concept. I would joke with them, ‘I don’t understand the concept of a concept!’”

One day, she retreated to her basement to paint the boiler. Then, she painted some pipes at a Metro station downtown. She added or enhanced colors to reflect the mood of the painting, she said, and a concept was born.

“I thought, ‘I really like this, it’s very enjoyable to me,’” Collins said. “I feel very fortunate that I found a passion like that.”

Collins said that between art and accounting, her brain is always occupied.

“[Painting uses] a very different part of my brain than doing the accounting for my companies. It gives me a way to look at things outside the box.”