Photographers get creative with images 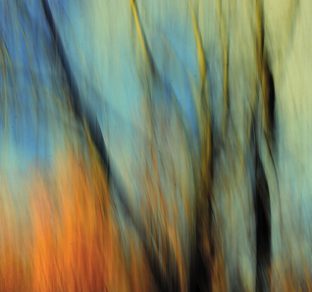 This computer-manipulated photo, by photographer and landscape architect Charles Bowers, is called “Color in Motion.” It will be displayed, together with works by other members of the Creative Imaging Workshop, at the Bernice Kish Gallery at Slayton House in Columbia starting Jan. 5. Photo by Charles Bowers
PRINT

“Photography is more than a medium for factual communication of ideas. It is a creative art.”

Those words of the great American photographer seem to be the motivating force behind the exhibition of some 40 photographs by the Creative Imaging Workshop, a group of eight local photo-artists, which opens Jan. 5 at the Bernice Kish Gallery at Slayton House in Columbia.

The photographers in the show believe that clicking the camera’s shutter button is just the first step towards the finished work of art they aim for.

After capturing the image, the photographers process their digital photos on computers, where they can alter the original pictures through enhanced color, shape, light and shadow. In this way, they say, they can transfer their inner vision of the photo, or of a collage of photos, to the finished work.

While the great film photographers of not all that long ago used darkroom techniques to enhance their photos, “there is even more scope for adjustment” via digital computer-enhanced imagery, said Richard Eskin whose “photo composites made from separate images” will be in the exhibit.

Eskin, 64, a retired ecologist for the Maryland Department of the Environment, said he has been an active photographer since high school. Over the last 10 years, his interest developed in computer-enhanced photography, and he has sold several of his works.

While noting that “a good photo is a good photo” no matter how it has (or hasn’t) been Photoshopped, he also said that photography is now classified as “a fine art.” He believes that photographers who produce more abstract works can be compared to the Impressionists among painters.

Another member of the Creative Imagining Workshop whose “abstract” works will be shown is Columbia resident Sarah Herman, 70, a retired high-tech consultant who didn’t seriously take up photography until four years ago.

She attends monthly sessions at the Ellicott City studio of Charles Bowers — a landscape architect and a very experienced computer-enhancing photographer — who has had several shows in the area and whose works are also in the exhibit.

Herman is well aware, as were the other interviewees for this story, of the famous quote by Henri Cartier-Bresson, one of the great “humanist” photographers of the mid-20th century. He said that photography was all about capturing the “decisive moment” — when the photographer realizes through the lens, in a fraction of a second, the significance of an event and its precise composition.

“We still would like to get that a-ha! moment — the expression on a child’s face, the special light on an ordinary object,” Herman said. But she also believes that the changes produced by computer techniques help “to adjust the picture as it was seen in the photographer’s mind. Ansel Adams did wonderful things in the dark room” as he was developing his photos, she pointed out.

Thomas Fretz, 74, another member of the group, has been taking photographs since he was 13. A retired University of Maryland administrator and a trained horticulturist, he has been an avid underwater, as well as landscape, photographer.

Fretz said that he doesn’t like taking portraits. “I don’t find it comfortable putting a camera before a person,” he said.

Many of Fretz’s photos have been converted through “post-processing techniques” into abstract works, he said. Photography, for Fretz, does not necessarily mean that you’re trying to catch a factual truth. “For all of us in this show, I believe it means that we are trying to catch an artistic truth,” he said.

The local exhibit will feature photos taken by Fretz of the now-deserted immigrant hospital on Ellis Island. From 1892 to 1954, 12 million immigrants passed through the complex of 22 buildings in New York Bay.

“I try to show the decay, the patina inside those buildings that once held thousands of immigrants, many of whom didn’t get through because of illness. I find the imagery there, along with the memories of the site, interesting,” he said.

The other photographers in the Creative Imaging Workshop whose works will be exhibited are Jon Meyer, Sukumar Balachandran, Karen Dillon and James Lubitz.

The show, which is called “Diversity” because of the different styles and subjects of the works, runs through Feb. 11. A reception will be held Sunday, Jan. 8, from 3 to 5 p.m. The public is invited.

Free admission tickets to the exhibit can be obtained online at www.wildelake.org. For more information, call (410) 730-3987. The gallery is located at 10400 Cross Fox Lane in the Wilde Lake Village of Columbia.