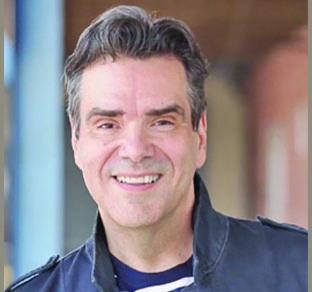 Dr. Mallard leads his guests at the mental hospital to a cell, where a patient relates his sad story: “Once upon a midnight dreary, while I pondered weak and weary, over many a quaint and curious volume of forgotten lore; while I nodded, nearly napping, suddenly there came a tapping, as of someone gently rapping, rapping at my chamber door.”

In the next 21 minutes, listeners hear the fellow say that he had been visited by a raven, who kept saying just one word: “Nevermore.” This, along with memories of his lost love, Lenore, sent him around the bend and to his insane asylum cell.

Those words were the beginning of the script for the recent radio recreation of “The Raven,” the classic poem by Edgar Allan Poe, who spent several of his writing years in Baltimore, where he died in 1849 and is buried.

A dramatization of the writer’s short stories is broadcast on the radio each month, part of a series known as “National Edgar Allan Poe Theatre on the Air.” The program debuted on Baltimore WYPR-FM in August 2019, and is now streaming on NPR’s website, accessible at any time of day or night.

The scripts were created by Alex Zavistovich (who also acts in them) and Richard Hand, a professor at the University of East Anglia in Norwich, England.

Zavistovich, 59, founder and artistic director of the National Edgar Allan Poe Theatre, said the programs belong to “the theater of the mind, which uses actors, music and sound effects to conjure up vivid stories in the listener’s imagination.”

The Library of Congress recently announced that it will archive the “Poe Theatre on the Air” episodes as part of its new Podcast Preservation Program. The library said it considered the programs to be “an important part of the cultural and historical record.”

Mark Dreisonstok, critic for Maryland Theater Guide, wrote: “We recommend these dramatizations of Poe’s tales, which will appeal to admirers of Poe as one of the masters of American literature…but also will find interested listeners in fans of horror series like ‘Tales from the Crypt.’ We hope these audio productions continue far into the future.”

‘A visual landscape for your ears’

During the pandemic, more theater companies are turning to audio productions, including Ford’s Theater in D.C., which will release A Christmas Carol: The Radio Play in December.

“We’re creating a visual landscape for your ears,” Zavistovich said of his performers. “As you listen, the brain fills in the absence of the visual component.”

Zavistovich was producer for the Molotov Theater Group in D.C., which presented live stage performances. One of them, Molotov’s 2014 production of Nightfall with Edgar Allan Poe, was extremely popular, giving Zavistovich the idea to create a radio series of the writer’s works.

He also credits such local veteran theater technicians as audio-engineer-producer Ty Ford for the success of the broadcasts.

Besides the psycho-terror stories set for next year, “Poe on the Air” will present dramatizations of the author’s three short stories featuring amateur sleuth Auguste Dupin — “The Murders in the Rue Morgue,” “The Mystery of Marie Roget” and “The Purloined Letter.”

Zavistovich noted that critics consider these tales to be the first great crime fiction stories. Arthur Conan Doyle pointed to the stories as a strong influence for creating his own fictional detective, Sherlock Holmes.

Critics have also noted Poe’s influence on the psychological probing of characters in Dostoyevsky’s novels, and pointed to Poe’s one novel — The Narrative of Arthur Gordon Pym, a story of the sea — as a major influence for Herman Melville’s Moby Dick.

So, 171 years after his death in a Baltimore tavern, what, besides the thrills and chills of his writing, does Poe offer us today?

“Poe’s stories deal with timeless themes of love and loss, and metaphysical questions about the meaning of life. That will never go out of fashion,” Zavistovich said.

“Also, look no further than the story ‘The Masque of the Red Death’ for an example of how Poe is relevant in today’s pandemic crisis,” said the producer-director-actor-writer who was born in D.C. and now lives in Baltimore.

Poe’s pandemic story features an arrogant prince who believes he has escaped a plague known as the Red Death by retreating to his abbey, where he decides to host a masked ball for his fellow nobles. A good time was being had by all, until a stranger disguised as a Red Death victim shows up, causing the prince and all his guests to die.

“Poe’s stories are every bit as strong — possibly even stronger — today,” Zavistovich said. “It’s almost as if we are experiencing those stories in real time.”