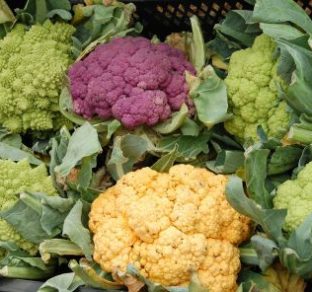 You may be in the midst of harvesting your zucchini, tomatoes and basil. However, August is also the ideal time to prepare your garden for its transition to cool-season plants like cole crops.

Brassicas, or cole crops, are members of the cabbage family. “Cole” derives from the Latin meaning stem.

Cole crops are part of the large genus Brassica, which come from herbs of the Old World mustard family. They include broccoli, cabbage, Brussels sprouts, cauliflower, kale and kohlrabi.

When to plant what

Begin by making an inventory of vegetables you can harvest now. Then determine how much space you will have available, so you can prioritize your fall plantings.

You can anticipate how long it will take for each crop to reach harvestable size by learning its approximate lifespan, noted by “days to maturity” on the seed packet or plant tag. (The Virginia Cooperative Extension publication “Cole Crops or Brassicas” lists this information as well.)

Many broccoli and cabbage heirloom varieties can range anywhere from 70 to 95 days, so plan and plant accordingly for the variety you wish to grow.

You’re a “brocc”-star if you plant in order for the crops to reach maturity before the first frost. The first frost day (with a 50% probability) in the metro Richmond area is mid-October.

To give your crops time to mature before autumn’s shorter days and frosty nights, plant in the heat of August. While some fast-growing fall crops such as lettuce and radishes can be planted into late September, cole crops, including broccoli, need more time. When in doubt, plant your fall crops a little early.

In August, you should plant cole crops from seedlings, not seeds. Seeds should have been started in June or July. Place your transplants 18 to 24 inches apart in rows 24 inches apart.

All cole crops prefer a location with full sun. Although a wide range of soils is acceptable, fertile and well-drained loams are considered best.

Cole crops grow better in heavier soils than do warm season crops. Typically, a soil pH of 6.0 to 6.8 is best for the cole family of vegetables.

The Virginia Cooperative Extension always recommends a soil test to determine deficiencies of major plant nutrients and suggest ways to correct them. Because cole crops can easily become deficient in minor elements, composted manure or composted vegetable matter ensures a supply of these nutrients.

Cauliflower has the most demanding soil and fertility requirements in the cole family.

The most significant way to reduce insect pests and diseases of cole crops is to rotate crops. To get ahead of any problems, do not plant any cole crop in a spot occupied the previous year by another cole family member. Two- or three-year rotations are preferred.

One advantage of “cole-d” weather planting is that there are typically fewer insects in the fall. Additionally, there are fewer problems with bolting (the production of a flowering stem before the crop is harvested), which is common in spring-planted cole plants.

An effective way to control weeds is to mulch with straw. In addition to reducing weeds, straw aids in moisture retention.

Consider how each crop grows and which part of the plant is eaten. For example, the edible parts of broccoli and cauliflower are the flower heads; these are more sensitive to cold and nutritional deficiencies.

Both cabbage and Brussels sprouts produce leafy heads, which can withstand greater fluctuations in weather and nutrition.

Mature cole crops can withstand several frosts in the fall; therefore, they can be stored in the garden after they reach maturity into October or November; even later for the hardiest varieties of kale and Brussels sprouts.

You should harvest cabbage when the head is very firm.

Pick broccoli while the head is still compact and before the small flower buds show any yellow. The head diameter will range from four to eight inches. After the center head is harvested, you might be lucky enough to pick the side shoots when they reach two to three inches in diameter.

As the sprouts of Brussels sprouts enlarge, remove the large leaves between the sprouts. Pinch out the growing tip of the plants in early September to hasten maturity. Harvest the sprouts when they are firm and before they open up. Surprisingly, a light frost or two improves their flavor.