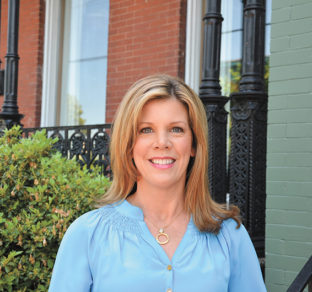 For now, Kathleen Reid’s book tour will have to wait. In the meantime, the local writer is writing her next book and reading those of others. Photo courtesy of Kathleen Reid
PRINT

For many of us, the restrictions associated with the COVID-19 pandemic have afforded more time to enjoy quieter pastimes like reading. Social distancing has provided extra hours and space to discover new authors, reread old favorites and escape to another time and place.

Local author Kathleen Reid, who wrote A Page Out of Life, Paris Match and, more recently, Sunrise in Florence, has enjoyed the opportunity to read more during the pandemic.

“I love to read,” Reid said, “and I love to be transported by another author’s work.”

Although the pandemic has led to economic mayhem for many industries, book sales have remained relatively consistent. Not surprisingly, online book sales surged this spring, when most of us were at home.

If not for the virus, Reid would be out and about promoting her recent release at book clubs, the VMFA and other venues. Instead, she has engaged in virtual events through online meeting service Zoom, an experience she finds a bit strange.

“I’m thankful for the opportunity to engage in these events, but I’m a people person,” Reid said. “I really miss the connections I get to make with the audience before and after a talk.”

The quarantine has a silver lining for her, though. Because Reid is spending less time promoting her book, she has started working on the sequel much sooner than she had expected.

“I’ve started researching the next book,” Reid said. She gave a hint about its focus: “[I] am enjoying reading about Leonardo da Vinci and Michelangelo’s feud in preparation for writing.”

Another local author, historian Jon Kukla, has also been dedicating his solitary days to working on his next book. Kukla, who writes scholarly nonfiction for the general reader, previously published three books to great acclaim — Patrick Henry: Champion of Liberty, Mr. Jefferson’s Women, and A Wilderness So Immense: The Louisiana Purchase and the Destiny of America.

During the pandemic. Kukla’s day-to-day experience of social distancing resembles his work life at any other time. After years of writing, Kukla is used to isolating himself to get words on paper.

Fortunately, Kukla had already traveled the country and conducted extensive research for his upcoming book — an analysis of the Stamp Act and the beginning of the American Revolution — before restrictions were set in place.

“Despite the fact that libraries and archives have had to close,” Kukla said, “my work has not been crippled.”

His research, however, is not finished. Kukla has also read voraciously, beyond the historical texts readers might find in his footnotes.

“I read things that might sound extraneous,” Kukla said. “These texts cause me to think about things in a different way.”

For instance, while trying to understand the authoritarian streak in British policymaking in the 15 years leading up to the American Revolution, Kukla read Stephen Eric Bronner’s The Bigot: Why Prejudice Persists.

“Books like this enrich my perspective,” Kukla said. “The Bigot helped me get at the characteristics that encourage authoritarian points of view.”

He also read a “beautifully written account,” he said, of New York City smuggling in the 18th century — Defying Empire: Trading with the Enemy in Colonial New York by Thomas Truxes.

Kukla has taken advantage of the home time coronavirus has given him. “The difference between a published author and an aspiring author,” Kukla said, “is sitting down to pound out words.”

When he’s not researching for his next publication, Kukla reads local authors as well. He was moved by Thick: And Other Essays, a recently published book by Tressie McMillan Cottom, a professor of sociology at VCU.

“This collection of essays about the experience and perspectives of black women is thoughtful and perceptive,” Kukla said.

Reid, on the other hand, has been reading some books simply to escape. She was captivated, for instance, by Kristin Hannah’s The Nightingale — a 2015 novel about two sisters in France during World War II.

“I was completely transported to France during the war and was mesmerized by the characters,” Reid said. “With COVID-19, I wanted to keep things light, and I was pleasantly surprised by the beauty of Hannah’s writing.”

Like many Americans, Reid has enjoyed reading Delia Owens’ Where the Crawdads Sing, a top seller in 2019 about a mysterious murder in North Carolina.

“It was funny to me that the protagonist was such a local hero, but she wasn’t even able to brush her teeth,” Reid said.

“Trigiani is a fabulous writer and person,” Reid said, “and her newest book was the perfect summer read.”

Engaging our brains and being transported to another world, as Reid and Kukla have done, can be good medicine for all, particularly during these uncertain times.