Repairing and restoring together 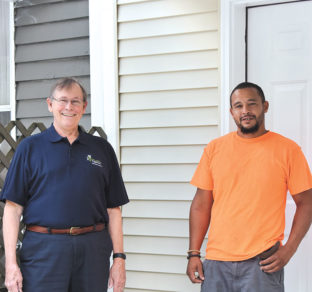 John Startt of Rebuilding Together Howard County stands outside a newly rebuilt house in Ellicott City with the homeowners’ grandson, Jay Greene. The house, heavily damaged by two floods, had to be completely rebuilt — during a pandemic. “It was a group effort,” Startt said. Photo by M. Payne
PRINT 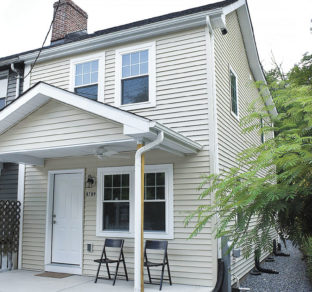 A local nonprofit rebuilt this flood-damaged house from the ground up, at no cost to its owners.
By: Ivey Noojin Posted on: August 17, 2020

An Ellicott City house, badly damaged by the 2016 and 2018 floods, was in such rough shape that it was barely habitable. However, the Greene family, who had lived there for 30 years, didn’t want to abandon the house where their children grew up and didn’t have the means to bring the house up to code.

A local group, Rebuilding Together Howard County (RTHC), which had repaired eight houses affected by the 2016 flood, heard about the family’s predicament and got to work.

In March, despite the pandemic, their team of contractors and volunteer laborers worked tirelessly to construct a new house from scratch at no cost to the family, enabling them to move back in July.

RTHC is the local affiliate of a nonprofit dedicated to repairing the houses of those with disabilities, veterans, families with children and older adults with limited incomes.

Growing out of a smaller organization known as Christmas in April, Rebuilding Together became a national nonprofit in 1988, and has since repaired more than 100,000 homes at no cost with the help of corporate sponsorship, volunteer labor, discounted services and donations.

Since 1992, the Howard County branch has itself repaired more than 800 homes. So it was surprising this year that, since March, RTHC has received only about half its usual number of requests for vital repairs, according to its executive director, Ann Heavner.

“It has to be a really big emergency for us to be called in,” Heavner said. “Not too many people want you to come inside their home [at the moment].”

The lower volume is good in one sense because Heavner’s group hasn’t been able to utilize volunteer labor during the pandemic, per direction of the national headquarters of Rebuilding Together.

Instead, the organization has had to hire contractors to complete urgent projects, such as roof repair, HVAC unit installations and water pump fixes. For smaller, exterior services like handrail or window installations, RTHC sends its own handyman crew.

With fewer assistance applications coming in, RTHC was able to turn its focus to the reconstruction of the Greene house — its largest reconstruction project.

John Startt, who has been on the RTHC board for 22 years and became its construction manager two years ago, has been with the project since the beginning. Three years ago, Startt, 73, got a call from a team of homebuilders.

“They had inspected the house, and they said, ‘We don’t really know where to start.’ It was in pretty severe shape,” Startt said.

He and the builders determined that the house needed more than just repairs; it needed rebuilding. But the Greene family, who had lived there for three decades, didn’t want to abandon their home.

So, Heavner secured a $100,000 grant from Howard County for the project. Seven contractors donated their services, and other local companies donated materials, according to Startt.

In the beginning of March, after demolition, the RTHC team had just begun rebuilding the house when the county went on lockdown. To limit exposure, Startt scheduled only one group of construction workers at a time. In addition, there were stronger sanitation efforts, which cost more money.

“There were all kinds of issues that I was called upon almost every day to deal with,” he said.

Despite the obstacles, Startt’s teams completed the work at the end of July, and the family was able to move back in.

“We were able to rebuild the house to a brand new home for them,” Startt said.

Typically, families don’t need to move out of their homes for repairs. But providing that assistance is more complicated for RTHC as a result of the pandemic.

George Clifford, who has been volunteering with RTHC since 2008 and recently became the head of its handyman program, understands the dangers.

“Our clients are almost universally going to be people at risk,” as many are older adults or individuals with chronic health problems, he said. “We don’t want to get sick or make anybody else sick.”

At the beginning of lockdowns, Clifford, 64, was frustrated at not being able to complete as many projects as usual. In response, “I challenged Ann [Heavner] and said, ‘Listen, if you’re not sending me into people’s homes, how can we make good use of this time?’” Clifford recalled.

Downtime can be a good time to learn, Heavner decided, so she found a virtual home-modification training course with the University of Southern California to help RTHC staff better understand the laws behind house repairs. More than half of the participants are employees of Rebuilding Together chapters, according to Clifford. “I’ve met ‘virtually’ some people who I wouldn’t know otherwise,” he said.

Clifford has also worked on a few handyman projects with his team — safely, of course. Generally two handymen go to local residents’ home to do exterior repairs. They also wear Rebuilding Together branded masks.

“I respect that whatever protocols we put in place have to be flexible,” Clifford said. “We still want to help people, [and] we’ll just figure out a way to do it that’s safe.”

Some projects on hold

The coronavirus has impacted more than just the volunteers’ ability to enter people’s homes; it also has decreased RTHC’s funds.

The group had to cancel its premiere fundraising and most popular event of the year, Rebuilding Day. Normally on that day in April, around 100 volunteers repair more than 30 houses.

“Our fundraising was definitely hampered because we had to cancel that Rebuilding Day,” Heavner said.

The group has received some money through grants, and funding from the federal Payment Protection Program. With the dearth of donations and the increased cost of materials due to the pandemic, however, RTHC has had to postpone some projects.

Before March, RTHC had identified two mobile home parks in the county that it would sponsor for free repairs. They were planning some kickoff events, with representatives that lived in the mobile park homes to help spread awareness about RTHC and its services. As of now, that project is postponed, according to Heavner.

In addition, Stratt is reviewing the houses that volunteers were supposed to help repair on the April Rebuilding Day. RTHC will have to hire contractors to do some of the fixes. For others, “We’ll put the volunteer projects back in the hopper, and hopefully we’ll do them [next year],” Stratt said.

Even with safety concerns and less money, RTHC won’t stop helping the members of its community; it will simply adapt.

“Our little nonprofit has a really important role,” Clifford said, but “the model that worked for over 20 years — that’s not going to happen for a while.”

For more information about the organization or about applying for home repairs, visit rebuildingtogetherhowardcounty.org.