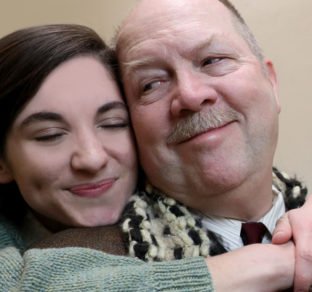 Hannah Kelly and Stephen Patrick Martin bring Anne Frank and her father, Otto, to life in a new adaptation of The Diary of Anne Frank at the Chesapeake Shakespeare Theater that runs through May 26. Throughout Baltimore, other events will mark the would-be 90th birthday of Anne Frank, who died in the Bergen-Belsen concentration camp when she was 15 years old. Photo by Shealyn Jae Photography
PRINT

Born in Germany in 1929, Anne Frank would have celebrated her 90th birthday this June. Instead, she will forever remain 15 years old for those who have read her posthumously published diary, Anne Frank: The Diary of a Young Girl, seen its various stage and film adaptations, or visited the Anne Frank House in Amsterdam.

Anne died in 1945 at the Bergen-Belsen concentration camp in northern Germany. Though born in Germany, she lived most of her life in Amsterdam, and when the Nazis invaded the Netherlands, she and her family went into hiding there. They were among eight people confined to a secret annex at her father’s business between 1942 and 1944, when they were all arrested and deported to various Nazi concentration camps.

Of the group in hiding, only Anne’s father, Otto Frank, survived the Holocaust. It was Otto who arranged the publication of his daughter’s diary following the war. He died in 1980 at the age of 90.

For the next several months, the Chesapeake Shakespeare Company (CSC) and Baltimore’s arts community will remember Anne Frank and the universal lessons of the Holocaust through a revised staging of The Diary of Anne Frank as well as a series of major exhibitions, performances and public conversations.

The first English translation of Anne’s diary was published in 1952. The original stage adaptation, written by Frances Goodrich and Albert Hackett, premiered in 1955 and was a commercial and critical success at the time, winning a Tony Award and the Pulitzer Prize for Drama.

However, through the years, that version of the play has been criticized as too sentimental, glossing over the characters’ Jewish identity and giving audiences a misleading message of hope with the famous penultimate line, “In spite of everything, I still believe that people are really good at heart.”

The 1997 adaptation written by American playwright Wendy Kesselman, which the CSC will present, puts more emphasis on the characters’ Judaism and includes scenes in which they pray and celebrate Chanukah.

Kesselman’s version also includes a passage in which Anne talks about her sexual feelings towards another girl, something that Otto insisted be redacted from the original publication of her diary. (Subsequent editions of the diary published after his death included those entries.)

The CSC production also includes a new ending in which Otto tells the audience what happened to the rest of the hidden group after their arrest and internment in the camps.

And instead of Anne’s hopeful final message about the decency of people, she is shown as she was last seen by a friend at Bergen-Belsen: “through the barbed wire, naked, her head shaved, covered with lice. ‘I don’t have anyone anymore,’ she weeps.”

While the original version of the play is still available for staging, CSC didn’t hesitate to choose the more recent adaptation. “This new version is more honest and more direct with the audience,” said Jean Thompson, the company’s director of communications.

She added that CSC’s Founder and Artistic Director Ian Gallanar chose the play for several reasons, among them being the theater’s mission to stage at least one classic work each season that is not just for adults. “A vital role of theater is to tell the stories that make a difference,” Thompson said.

The play is “a modern classic,” according to its director, Eve Munson, an associate professor of theater at UMBC and director of the BFA in Acting Program.

“It’s not only the diary of a young girl, but an extraordinary piece of literature in its own right. Anne is any young girl, but she’s also this particular girl living an utterly claustrophobic existence in a terribly pressurized environment,” Munson said.

Portraying Anne is Hannah Kelly, a former student of Munson’s. Both Kelly and Munson are shaping the performance to depict Anne as the determined young woman her diary showed she was.

“Anne was demanding that people take her seriously,” said Munson. “She may have been a 13-year-old kid, but she was also a young woman with a will of steel.”

When the company announced last year that it would produce The Diary of Anne Frank, it was “overwhelmed” by calls from the community and from synagogues, Thompson said.

“They asked us to do more than just perform the play,” she said. “What astounded us the most was discovering along the way that, quite independently, a host of major cultural and arts organizations around Baltimore were also working on projects shining a light on the lessons of the Holocaust and taking a stand against hate, each in their own way.”

She noted that Anne Frank’s story is particularly relevant today, with the rise in hate crimes not only around the world but both nationally and regionally.

A Baltimore synagogue encouraged the theater to regard the play as a window through which audiences could begin to explore and understand the Holocaust. They counseled the theater company to recognize that for some patrons, particularly young audiences, the play may be an introduction to a dark period of world history that is receding from memory.

As a result, Chesapeake Shakespeare Company and its community partners will be celebrating a “Spring to Remember” in April and May, said Thompson. (See sidebar for details on related programming.)

Thompson referred to a 2018 survey by the Conference on Jewish Material Claims Against Germany that found that 45 percent of Americans cannot name a single Holocaust concentration camp, and the majority believe, inaccurately, that Hitler took power by force (rather than by winning a popular election). An even greater number think something like the Holocaust could happen again.

“It was frightening to me to realize that my own son hadn’t read any Holocaust literature in school,” said Lesley Malin, who plays Anne’s mother in the play. “We’re losing that perspective that this could happen again.”

Malin acknowledged that immersing herself in the research of the life and times of Anne Frank, as well as playing the role, has been both “trying and draining,” but she sees it as a responsibility. “My mother is Jewish,” she explained, “and I’m doing this as much for my Jewish forebears as for anything else.”

The Diary of Anne Frank will be presented Thursdays through Sundays, from April 19 to May 26, at Chesapeake Shakespeare Company, 7 S. Calvert St. Tickets are $19 to $55, and may be purchased online at chesapeakeshakespeare.com or by calling (410) 244-8570. The box office is open Tuesday to Friday, noon to 4 p.m., and one hour before performances. Group discounts are available.

There will be a special pre-show talk and book-signing event on Sunday, May 19, at 12:30 p.m. Edith Mayer Cord, who was an adolescent in Europe during World War II, will discuss her forthcoming memoir, Finding Edith: Surviving the Holocaust in Plain Sight (Perdue University Press).

Recognizing that many Baltimoreans will never have an opportunity to visit the Anne Frank House in Amsterdam, Chesapeake Shakespeare Company will also be offering a virtual reality tour courtesy of Oculus Inc., the Jewish Museum of Maryland and the Anne Frank Center for Mutual Respect.

Other community events remembering Anne Frank and exploring the Holocaust include:

An exhibition of the Frank family’s private photos, developed by the Anne Frank House and sponsored by the Anne Frank Center for Mutual Respect USA, will be on view April 26 to June 13 at the Peggy and Harvey Meyerhoff Gallery Gordon Center for the Performing Arts at the Rosenbloom Ownings Mills JCC, 3506 Gwynnbrook Ave. Admission is free. An opening reception will be held on May 9. For more information, call (410) 559-3510.

Theatre Morgan at Morgan State University presents a one-act play depicting a fictional conversation between Anne Frank and Emmett Till. Running April 26 to 28 and May 2 to 4 at the Murphy Fine Arts Center, 2201 Argonne Dr., the play tackles the topics of racism and prejudice by introducing two teenagers from different times and places who share a common tragedy. Tickets range from $5 to $20 and can be purchased in-person, by phone at 1-800-551-SEAT or at ticketmaster.com. For more information, call (443) 885-4440 or email murphyfineartscenter@morgan.edu.

The Baltimore Museum of Art, 10 Art Museum Dr., explores how war impacts art in an exhibit featuring 90 works by such artists as Salvador Dalí, Pablo Picasso, Joan Miró and Dorothea Tanning. Running through May 26, the exhibition also highlights the connection between art and human rights. In response to Germany’s invasion of France in 1940, a group of more than 200 artists and influential professionals formed the Emergency Rescue Committee to help intellectuals and artists escape. Tickets are free for members or $5 to $15 for nonmembers. For more information, call (443) 573-1700 or visit artbma.org/exhibitions/monstersmyths.

“Stitching History from the Holocaust”

Through August 4, the Jewish Museum of Maryland is displaying dresses created from sketches by Hedy Strnad, who sent her designs to her husband’s family in America as part of their unsuccessful attempt to escape from Prague in 1939. The Jewish Museum of Maryland at the Herbert Bearman Campus is located at 15 Lloyd St. Tickets range from $2 to $10; members are free. For more information, call (410) 732-6400 or visit jewishmuseummd.org.

“Esther & The Dream of One Loving Human Family”

After traveling to 42 museums since its premiere in 2001, this exhibit returns to the American Visionary Art Museum, 800 Key Hwy., this month for a brand-new five-year installation. The 36-piece collection of needlework and fabric collages follows Esther Krinitz through the Holocaust and is accompanied by art from Rwandan Tutsi genocide survivors, Native American activist Judy Tallwing and others. Tickets range from $9.95 to $15.95; members and children six and under get in free. For more information, call (410) 244-1900 or visit avam.org.