Shall we dance? Absolutely! 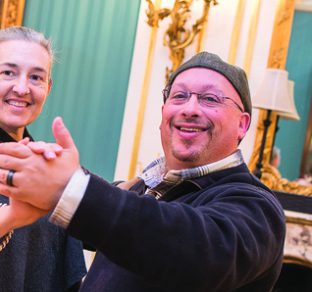 Christine and Lee Gedansky teach dance to students of all ages at Beginning Ballroom, a studio they started in 2002. Regular dancing can improve not just one’s balance and cardiovascular health, but also memory, according to researchers. Photo by Christopher Meyer
PRINT

By: Carol Sorgen and Danielle Rexroad Posted on: February 20, 2017

Christine and Lee Gedansky began ballroom dancing lessons in 1991 in preparation for their wedding. Unlike most couples, though, they never stopped dancing.

In 2002, they decided to establish their own dance studio, Beginning Ballroom, “to bring real dancing to real people,” said Lee, who will soon turn 50.

Throughout their marriage, the Gedanskys have continued dancing, taking lessons not only in Baltimore but in Los Angeles, New York and New Orleans, as well as competing in regional dance competitions as their skills developed.

In addition to offering classes in their own studio on Evesham Avenue (by appointment only), they have also taught at local health and community centers, colleges, and assisted living and retirement communities.

Gedansky likens ballroom (or partner) dancing to musical standards, such as those performed by Frank Sinatra and Tony Bennett. “It’s not mainstream, like hip-hop, but it has longevity,” he said.

The Gedanskys have students of all ages — from millennials who are preparing for their own wedding day, to dancers in their 50s, 60s and beyond, some of whom are re-marrying and want their moment in the spotlight.

Take Melissa and Tom Hopkins, who began dance lessons with the Gedanskys in 2010 for their then-upcoming wedding.

“We wanted to have a nice first dance for our own wedding,” said Melissa, 52. Since then, the couple has returned to Beginning Ballroom twice (for 10-lesson packages) as a refresher for their daughters’ weddings.

The Hopkinses found that it didn’t matter that neither of them had had any previous dance experience, or that Tom “has no sense of rhythm or timing!” according to Melissa.

Unlike the Gedanskys, the Hopkinses don’t intend to make a career of dancing nor do they go out specifically to dance. “But when we’re at a function with dancing,” said Melissa, “we feel so much more confident on the dance floor.

“We’ve danced on cruises, at parties, weddings, etc., confident that we can move across the dance floor with some grace. We’re able to enjoy ourselves without being self-conscious.”

Dancing for fun and health

Dancing is not only great fun, but it also improves brain and muscle memory, according to Barbara Pattillo, owner of Towson Dance Studio.

“Dancing is ideal for balance and coordination, especially because it involves musicality, rhythm and timing,” she said.

“And then there is the aspect of physical fitness, of course, especially with faster dances such as swing, salsa, samba, quickstep and Viennese waltz.”

One of Pattillo’s students, Johns Hopkins neurologist Dr. Majid Fotuhi, noted that ballroom dancing is also a great memory aid in his book The Memory Cure: How to Protect Your Brain Against Memory Loss and Alzheimer’s Disease. Fotuhi recommends dancing because it joins together physical activity, socialization and remembering steps.

According to Fotuhi, who began taking ballroom dancing lessons while a student at Harvard Medical School, lifestyle changes — such as exercising both your brain and your body and remaining socially engaged — all contribute to a healthy brain as we age.

Research supports this claim. For example, scientists from Western Sydney University’s School of Science and Health in Australia found in a study of more than 48,000 people over 40 that those who danced over a 10-year period were 49 percent less likely to die of heart disease than those who rarely or never danced.

Another benefit of ballroom dancing, added Pattillo, is the social contact it affords, whether you’re married or single. “Being around people who enjoy the same activities is a huge antidote to isolation, and a great way to meet people and enlarge one’s social circle.”

That’s one of the objectives of the weekly Sunday afternoon tea dances held specifically for seniors at the Promenade DanceSport Facility in Windsor Mill. “It’s the most well-attended dance of my weekend, with regular patrons well into their 80s and 90s, along with dancers of all ages,” said owner Cindy Sumida.

At Charlestown Retirement Community, residents are dancing their way to health, wellness and good times, led by fellow resident Jack Jackson, 91, who has been teaching ballroom dancing there for the last eight years.

“Whenever I hear dance music, it makes me feel like I want to get up and move,” said Jackson. He taught dance on nights and weekends throughout his career as a Baltimore County elementary school teacher. “I’ve taught the fox trot, waltz, cha-cha and swing, and I still like to do tango and samba.”

At the recent Charlestown Follies, Jackson even performed a tap dance rendition of Gene Kelly’s iconic “Singin’ in the Rain,” complete with umbrella.

Charlestown residents Anne Kredell and Dan Cieslowski have been taking lessons with Jackson for the past four years.

“Before this, I never danced in my entire life,” said Kredell. “We saw a flyer posted in the community, and it sounded like fun. We really have a good time together.”

Jackson, who once taught at Arthur Murray Dance Studio, said that dancing has helped keep him in good health over the years.

“It’s a great way to exercise,” he explained. “Once you get into it, it’s hard to pull yourself away, it’s so much fun. Health-wise, I’m in darn good condition compared to other people my age. I attribute that to a lifetime of dancing.”

Norma Wolff also prefers to dance her way to good health. “I started taking tap and jazz classes at a senior center when we lived in Rhode Island,” Wolff said.

“When we moved to Charlestown, I decided to start teaching a line dancing class there. The first class was so full we could barely move, so I split the group into two separate classes.”

Wolff believes that dancing has helped her stay in shape both mentally and physically. “You have to think about the steps and remember them, and then do them,” she said. “It’s all around good for you.”

Wolff enjoys dancing and performing so much that she organized a musical variety show along with some of the students in her classes.

“We do a combination of dance, short skits and singing — similar to a vaudeville-type show,” she said. “It’s a lot of work, but we’ve had a great time together.”

“I love to move to music,” Wolff said.

At the Promenade DanceSport Facility, group classes are $10 per person for an hour class, $15 for 1.5 hours. Private lessons range from $60 to $125 per hour, depending on the instructor. Admission to weekend social dances is $15 ($10 for single gentlemen willing to mix), preceded by beginner and intermediate lessons. Retired and active military admitted free on Friday nights with ID. Visit www.mddancesport.com.

In addition to the studios mentioned in this article, check your local senior center to see what dancing classes may be offered.