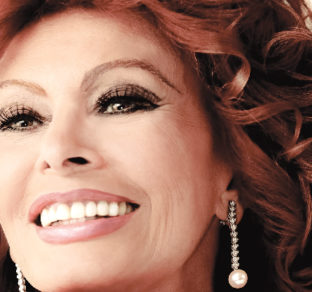 Sophia Loren rose from a childhood of poverty during World War II to an iconic, decades-long career in Hollywood. She will address local audiences and answer their questions on Nov. 21 and 22 at Montgomery College in Rockville, Maryland, where 10 of her films will be screened starting Nov. 15. Photo by Armando Gallo
PRINT

Take one look at Sophia Loren, who was born in 1934, and it’s clear she knows the secret of aging well.

“There is a fountain of youth,” Loren once said. “It is your mind, your talents, the creativity you bring to your life and the lives of people you love. When you learn to tap this source, you will truly have defeated age.”

Loren, 85, is still bringing her passionate creativity to the world — in fact, to Rockville, Maryland.

In November, she will speak to audiences at the Robert E. Parilla Performing Arts Center on the Rockville campus of Montgomery College. In honor of her two public appearances there on Nov. 20 and 21, the center will also screen 10 of her films as the Sophia Loren Film Festival from Nov. 15 to 24.

One of them, Two Women, is the film for which she won an Academy Award for Best Actress in 1962. In the Italian film, Loren portrays a widow in Italy during World War II.

It’s the performance she’s proudest of in a role that mirrors her own life.

A child of war and poverty

Born in Rome to a single mother, Sophia Villani Scicolone was six years old when World War II began. Abandoned by her aristocratic father, her mother had retreated to her hometown of Pozzuoli, a suburb of the port of Naples — and therefore a target for Allied air raids.

When bombs fell, villagers fled to dark, dirty train tunnels teeming with mice and cockroaches. Loren still has a fear of the dark and sleeps with the light on today, she confessed in her 2014 memoir, Yesterday, Today and Tomorrow: My Life.

When Loren was 10 years old, a piece of shrapnel cut her chin, leaving a small scar.

The scars of the war are still with Loren, she said in an email to the Beacon. “My memories are strong,” she said. “We went through a lot.”

In her 2014 memoir she recalls the sounds of bombs, sirens and screams — and the ache in her stomach when the family had nothing to eat except bread.

However, she told the Beacon, “Mother was our savior. She saved us from a very poor childhood. And finally helped us to get out.”

After the war ended, when Sophia was 11 years old, her mother turned their living room into a pub. Every Sunday afternoon, the family served homemade brandy to American GIs as Sophia played piano and her sister sang for the soldiers, who shared their bread, coffee and chocolate with them.

With the American soldiers came their movies, which offered the shy, skinny Sophia — taunted by her classmates as a “toothpick” — a more optimistic view of the world. She longed to be like the actors, who were “allowed to express their feelings,” she wrote in her memoir.

Her mother, a Greta Garbo lookalike whose parents wouldn’t allow her to go to Hollywood, enrolled the teenaged Sophia in acting school and entered her in a Naples beauty contest. Wearing a pink dress fashioned from the living room curtains, Loren won wallpaper, tablecloths, $36 and, most importantly, a train ticket to Rome.

There, in a restaurant near the Colosseum, Loren, then 16, met her future husband.

“It was a beautiful encounter,” she told Larry King in 2014.

Film producer Carlo Ponti, who was 22 years her senior and married, noticed the young girl and invited her for a platonic stroll in a nearby garden, where he urged her to enter a beauty contest (she won second place).

Ponti became her benefactor, introducing her to director Vittorio De Sica, who would direct Loren in dozens of her 45 films.

When she turned 19, Loren and Ponti became romantically involved, and they were married in 1957. Ponti’s friend suggested she change her name to Sophia Loren (after popular Swedish actress Märta Torén).

Ponti and De Sica changed the course of her life, she said in an email. “Everyone needs angels. These men were mine.”

She remained married to Ponti until his death in 2007. The couple, who lived in Geneva, Paris and Italy, had two sons, one of whom is a director and the other an orchestra conductor.

She remains close to her sons’ nanny, who now takes care of her (and of her four grandchildren when they visit).

“My children’s nanny is one of my oldest living friends,” Loren said in an email. “Life gives you blessings, and even though you cannot control who comes and goes from your life, a long friendship is a wonderful blessing.”

Loren won her first movie role at age 17 and signed a contract with Paramount six years later, which led to dozens of films. She appeared on the big screen with leading men from Charlie Chaplin to Richard Burton.

Cary Grant proposed marriage when they were filming a movie in 1957 (Loren published his love letters after his death). She rebuffed Marlon Brando’s advances during the filming of another movie in 1967.

Of course, she picked up quite a few awards for her performances. In addition to her Oscar for Best Actress in 1962 for Two Women, she won an Honorary Academy Award in 1991, a Grammy Award, five Golden Globe honorary awards, as well as Best Actress at the Cannes Film Festival.

Although she published a memoir in 1974, co-written by A. E. Hotchner, and has starred in two television biographies (she played her mother), she burns her diaries and other personal items.

“Every year I destroy them. There are some things I want to keep just for myself,” she told the U.K. Telegraph five years ago.

Now she plans to share some of her secrets and life wisdom with her fans. She started visiting U.S. cities in 2017 to address audiences in a Q&A-style tour named “An Unforgettable Evening with Sophia Loren.” In addition to Rockville, she will be on stage in cities in California and the Northeast U.S.

“I think I’ve seen almost everywhere in the world. And gratefully,” she told the Beacon.

As for Sophia Loren’s secret to aging well, she told us, “One of the secrets is to be happy. It’s simple, but find happiness wherever you can. It directly affects how we age, no?”

On Nov. 20 and 21, “An Unforgettable Evening with Sophia Loren” is scheduled for 7:30 p.m. at the Robert E. Parilla Performing Arts Center, 51 Mannakee St., Rockville, Md. Tickets range from $100 to $550 for a VIP meet-and-greet ticket. No senior discounts.

The Sophia Loren Film Festival will take place from Nov. 15 through 24; tickets for each film cost $5.