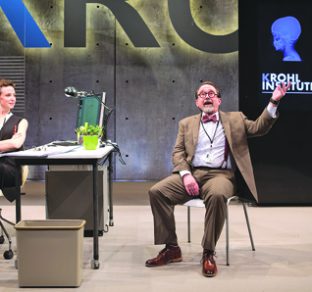 A 30-ish male tutor and his 22-year-old female student at an English university are debating the prosaically labeled “hard problem,” which concerns how biological brain tissue creates complex feelings, thought and action.

Of course, it’s obvious they’re lovers, too. He’s all ego, much less id. She’s a believer that absolute morality is the innate quality making us human.

And we’re off, careening through the back alleyways of Brit playwright Tom Stoppard’s inquisitive, wildly inventive, and undisciplined mind. His fairly new play, The Hard Problem, is at Studio Theatre, receiving its area debut through at least February 19.

Sir Tom has taken us on this journey into the meaning of human consciousness before, most notably, it seems to me, in Arcadia, where he mixed science, history and English estate gardening into a fascinating theatrical homily. Here, it’s science, philosophy and hedge fund management.

The unusual blending of disciplines somehow adds up to a Stoppardian world-view, a dramaturgical string theory that everything’s connected. (Something somewhat similar happens in his play Copenhagen, onstage locally last month at Theatre J.)

It’s not insulting to say these plays are all talk, little action, more exposition than visible plot developments. You don’t go to a Stoppard play to see a plot unfolding step-by-step in analog fashion. You go for intellectual acrobatics and a torrent of ideas that twists and turns and, when he is at his best, surprises.

Unfortunately, this is not Stoppard at his best. It’s OK Stoppard.

There are no real surprises. Many questions are tossed about, and whatever answers that may or may not be presented come much too conveniently — from the deus ex machina of astounding coincidence, a development inexpertly tipped-off earlier on.

Is altruism real, or is it ultimately self-serving? Where does it come from, a chemical washing through tissue in the brain, or some God-given humanity? Is “the brain” different from “the mind?”

No opinion offered. It’s as if Stoppard drew up an intricate outline, then grew weary filling it out.

We follow Hillary (Tessa Klein) from 2001 to 2007, the cusp of the financial meltdown. She graduates and gets a job at a prestigious institute funded by Jerry Krohn (David Andrew MacDonald), a billionaire hedge fund manager.

The institute investigates and studies “brain science,” including “the hard problem” and how understanding it might be translated into something useful. Useful, apparently, for humanity and, perhaps more crucially, for more successful hedge fund management.

Hillary grapples with deep personal sorrow and a troubled relationship with God, neither of which seems to intrude on her belief in science and logical analysis. The other characters populating the story exist primarily to present various ideas, rather than characters, as we follow Hillary’s evolving situation.

On the other hand, Stoppard’s sharp dialogue can be found here. Hillary, now sorrowful for giving up a baby for adoption as a teenager preparing for college, says, “I swapped her for a doctorate.” Ursula (Joy Jones): “Hillary makes altruism sound like morality.”

Director Matt Torney keeps his nine cast members moving forward, nimbly negotiating the dialogue with proper dynamics so we can keep up without tiring.

Kyle Cameron has some difficulty performing Spike, the caddish, sexist and self-absorbed tutor, who follows Hillary to the institute. Stoppard provides moments of humanity for the character, so we think we know him, but then snatches those clues away, leaving us unsatisfied.

As Leo, Hillary’s superior at the institute, Martin Giles shines in his scenes with Klein. His work is the most nuanced, next to Klein’s, and together they employ pauses, subtle looks, and a vibrant flow of energy that brings the issues at the core of this play to life. Everyone else provides serviceable characterizations.

Debra Booth’s stark and sterile sets provide a proper framing for the themes, as well as allowing a variety of locations in the intimate space. The giant block letters KROHN on the wall of the institute seem autocratic and scary, as if the name of the benefactor and his financial empire are somehow ominous.

Sound designer and composer James Bigbee Garver provides what can only be called a soundtrack. It’s a marvelously eclectic mélange of voices and orchestrations that immeasurably contributes to the cerebral meditation and human interaction of the actors. Subtle themes of wonder mix with ominous chords and even dissonant passages to effectively underscore their work.

It’s not all cerebral rumination. Hillary’s heartbreak is allowed to develop into an emotionally moving plot point that leaves some in the audience teary-eyed. It’s conventional theatrical artifice, meant to allow us to leave the theater feeling as if we experienced some type of catharsis. But it is effective. (I misted up. But then, I’m easy.)

All this takes a dialogue-dense hour and 45 minutes, without intermission. And I couldn’t help but think that some of the questions raised here were posed a long time ago, much more succinctly, in a scene written by another English playwright. I believe it began this way: “To be, or not to be. That is the question.”

Ticket prices begin at $52. Those 62 and older can save $5 on each ticket. Limited $30 tickets go on sale 30 minutes before curtain at the box office. They are subject to availability and fees. Veterans and their families receive 20 percent off by using the code BLUESTAR when buying tickets.

All performances are fully accessible for patrons with special needs, including an assistive listening system. Accessible seats are available by reservation.