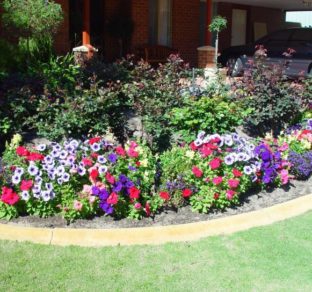 Across the downs a hummingbird
Came dipping through the bowers.
He pivoted on emptiness
To scrutinize the flowers.
— Nathalia Crane, “The First Reformer,” 1925

The sight of a hummingbird hovering in midair while wicking up nectar with its tube-like tongue is quite thrilling.

Hummers can fly forward, backward, even upside down at speeds averaging 35 miles per hour. Their wings produce a humming sound by beating 50 to 70 times per second, and they can beat more than 200 times per second while diving.

The majority of the hummingbirds seen in Central Virginia — ruby-throated hummingbirds — are tiny, measuring three inches long and weighing less than a nickel. Both males and females have a shiny, bright-green back and crown with a grayish-white belly, but only the males boast an iridescent ruby-red throat or gorget.

Ruby-throated hummingbirds migrate early; in fact, you may have seen your last hummers of the season by now. They leave Virginia in late July through early September to winter in Florida and Central America.

Surprisingly, tiny ruby-throated hummingbirds cross 500 miles over the Gulf of Mexico in a single non-stop flight lasting up to 20 hours. To survive, hummers must fuel up before and right after crossing the Gulf — after all, there are no sources of nectar over the ocean! Their fat stores, along with helpful tailwinds, get them to their winter destinations.

Individuals leave their wintering grounds in early spring, arriving in Central Virginia around mid-April to stake out territories and begin a new breeding season.

If you’d like to see more hummingbirds in your yard, now is the time to plan ahead for spring. Fall is the best time to plant most trees, shrubs and perennials, the plants that return each year.

An average hummingbird consumes half its weight in sugar daily and needs nectar-producing plants with twice the amount of sugar as a soft drink.

Because birds rely on sight to find flowers, they look for those with bright colors, preferably red or orange. Flowers with a tubular shape work well for long beaks. Hummingbirds are fierce defenders of small territories around their favorite flowers.

To attract hummingbirds, invest in a variety of native plants that hummingbirds prefer. Ruby-throated hummingbirds provide pollination services in return for a nectar reward for around 20 species of flowering plants in the eastern United States.

A perfect example is the late-summer blooming cardinal flower (Lobelia cardinalis), which has enticing bright red tubular flowers. The pollen-laden female reproductive structures curve over each flower’s entrance, ensuring pollen is brushed onto a hummingbird’s head and beak each time it drinks nectar.

It’s best to plant masses of the same species or the same bloom color to increase visibility. A variety of species with bloom times from late spring to early fall provide adequate food resources for hummingbirds throughout the entire breeding season.

The native coral honeysuckle vine (not to be confused with its Japanese cousin) blooms spring through summer, and Carolina jessamine has flowers from late winter to spring.

Be on the lookout for walnut-shell-sized nests woven from spider webs and plants on top of thin branches in dense parts of a tree or shrub before you get out the electric hedge trimmers!

Eliminate or reduce insecticide use in your yard. After all, a female hummingbird may catch up to 2,000 insects and spiders to feed herself and her young during the breeding season.

Up close and personal

To enjoy birdwatching, buy a nectar feeder to supply supplemental nutrition to hummingbirds. Although ruby-throated species migrate, feeders may attract other hummers (such as the rufous hummingbird) in the winter.

It is important to change the sugar water every three to five days to prevent mold and fermentation. Clean feeders with hot water and a bottle brush once per week. If you have a glass feeder, it may not be frost-proof; place it in a garage or shed during the coldest parts of the year.

Finally, provide a shallow bird bath or water mister in your yard. Hummingbirds satisfy most of their water needs by consuming nectar, but they will also use shallow, wet areas for bathing and drinking.